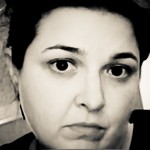 Anna March’s Foundlings was a column that ran in every general issue of Literary Orphans Journal, from ISSUE09 to ISSUE15. The torch has since been passed on to Anna Short. The concept of Anna March’s iteration of the column was to be an exploration of who we are as we discover ourselves.  It was a year-long look at aspects of our identity, that endeavored to explore “Who we are. Who we might be becoming. ” In the column, the notion of identity as a static idea, was rejected.  Instead, we grappled.  The space was one more about interrogations than answers. We struggled here to render ourselves and one another visible, believing that to be a writer’s work in this world.  The column featured author conversations and interviews, fiction, non-fiction, poetry and assorted other forms.

Anna’s work has appeared here in Literary Orphans and in more than a dozen other publications including The New York Times, New York Magazine, Salon, and The Rumpus.  Her novel, The Diary of Suzanne Frank, is forthcoming and she is at work on a memoir. Follow her on twitter @annamarch and learn more about her at annamarch.com. Anna March will continue to work with Literary Orphans as part of the Advisory Board, as well as an Editor-at-Large.