He’s smoking. He’s leaning over a rail and he’s trying too hard, his shirt half-tucked and his hair half-tussled, one bare foot bent on the toes, his wrists limp and crossed. He’s scowling and he’s flicking ash down the four floors of the building. His problem isn’t that he cares too little, it’s that he cares too much, and he has this carved in the careful curve of his spine.

She puts a hand on the small of his back and leans over the railing with him. She follows his line of sight to a slab of concrete. She inhales—if she asks about what’s so great about the slab of concrete, he’s going to wax poetic about the futility of man and the fragility of urbanization for half an hour, so instead she says, “You’re smoking again.”

“Yeah.” The amount of pretension he can pack into that one word astounds her. She inhales and fights the urge to sigh; she doesn’t want to set off a chain reaction. “I just…woke up wrong.”

“You always wake up wrong,” she says, her voice hollowed out. She wants to say, and you always wake up with me, but that doesn’t come. He only sleeps (in bed) with her when he gets drunk and high the night before, and that’s always followed by a morning spent smoking a cigarette on the balcony of her fourth floor apartment. Her apartment is ingrained with kitsch: her clock is a tiny teapot that hangs above her stove and her furniture is purposely mismatched. She doesn’t have doors, but strings of beads. He hates it.

“Yeah, well.” He pauses, then shakes the cigarette, cinders falling like cherry blossoms. “That’s what happens, you know.” He’s so vague. She takes her hand away from the small of his back.

“I’m worried about you,” she says to the faraway slab of concrete.

“Robin.” There’s a bite in her voice, bile in her throat, and she can’t swallow it back. “Stop, Robin. I’ve known you forever, just stop pretending.”

“Yes, you are. This tortured soul act—I watch you in the bathroom, I know you gel your hair and you play with your clothes to see what looks best, okay? Your short stories are terrible, you can’t write, and you’re never going to finish that novel. You do coke and champagne and that’s it. You’re a spoiled, bored little rich boy that’s so caught up in the glorification of mental illness and pain that you’re just this—stereotype.”

“You just don’t understand.” He lets the cigarette, half-smoked, drop from his fingers and she watches at it floats to the ground, a modernized butterfly. Putrid.

“I do understand,” she sighs. “I know you better than you know yourself, and I love you—”

He puts a spindly hand to the back of her neck and pulls her towards him, presses his mouth against hers. Her eyes shut, an instinctual response. His hands are stronger than they look and he tastes like smoke, a wisp of a man. Their only connection is the pads of his fingers pressing into her hairline and their lips—his moving, hers not. She presses off against his chest and leans back, swatting his hand away.

“You love me,” he says. There’s some old part of him, the part that used to connect to human beings and wasn’t obsessed with Palahniuk, Fitzgerald, Hemmingway, all of them, all these old worn-out men with their old worn-out words, that fights through in his face, that forces his bottom lip into a pout. Robin wrangles it back, rearranges his expression into that pinnacle of apathy, and she cringes.

“As a friend,” she says, and it feels like a lie, like something that needs a second clause. Not anymore, I barely even recognize you, and just because we touch each other when you’re not you beneath the blankets doesn’t mean anything.

“Friends don’t let friends like you let me,” he sniffs, looking up and off to the side. His hand, hanging by his thigh, twitches, as if he wants to bring a nonexistent cigarette to his lips.

“What does that even mean?”

He doesn’t have a response. She turns away, brushes aside the beads that hang just inside her sliding glass door and retreats to the bedroom. The bed is unmade, two indentations of bodies in it, and she undresses and lays inside of his, nesting herself in the mound of bohemian blankets. If she tries hard enough she can smell him—not the wisp of the man that he now is but the real Robin, the Robin in eighth grade that had acne up and down the sides of his face and hair an awkward length, the Robin that used to love to watch slam poetry with her and instant message about half-baked plans of running off to Paris until one o’clock in the morning, which used to be late to them. The Robin before they split, before he started self-medicating and dropped out of college, before she got her journalism degree and a tiny apartment in an up-and-coming city.

He pads in sometime later and peels off his shirt, folding and placing it on top of her pile of clothes. He gets in bed with her, pulls her towards him. Because they’re under the covers, in a nest where they can still pretend they get along and aren’t doomed for tragedy (no matter how hard she fights it), she allows him. Rolls over, presses herself into him. And if they both cry, well, they’re the only ones that will ever have to know about that.

Andrea Glenn is a seventeen year old senior at the St. Petersburg High School International Baccalaureate Programme in St. Petersburg, Florida. She enjoys both reading and writing, and has engaged in both for as long as she can remember. She finds that writing itself allows her to unite her two passions, words and human interaction. Apart from her literary pursuits, she likes to think critically about the world, argue about anything with anyone and care for her pet rabbit, Cayman. 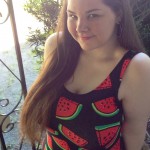