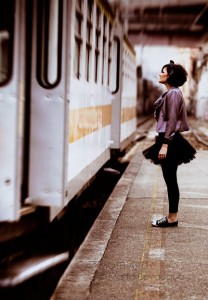 A LONG DAY AWAY

Summoned by rumbles of thunder and ice,

I watch rain gather to pools,

the sky is soft as blue chalk.

I stand on a side street stoop,

grinning with the sidewalk traffic turn,

the blank-faced tumble of iPhone talkers.

The crosstalk blur between ringtone and text

are scrapped by dropped coverage,

a car leaping a curb.

English engineers in exile preen at the corner light,

seat their kids at separate tables,

A bus-borne breeze folds back a woman’s London Fog.

Harlequin diamonds seamed on her dress,

she flashes a flirty smile.

Back a year, I heard three drunk’s confessions.

the tidal line of pre-fab bars and bistros,

they haunt the streets as I do.

Cigar butts pile at my feet.

Empty cans rattle in the bag as I rise.

patience wanes, the wind picks up.

I could not fault the beauty of this day.

I live in the ruins of early morning—

the writer’s 4am fall to bed,

a workman’s anxious rise at 6.

As a drunk, a sober man

I wake now to no better image

than landscapes blasted to bone,

blowsy as a border crossing.

My life has been mistrust

“Someone must suffer” is how I understand love.

Transient as a migrant picker, a circuit rider,

the countryside pattern is revealed—

rum and Coke for a hundred hours,

Those who please fear bare language.

Raw as the winter river flood

that rends as it flows,

I lend a brutal voice.

There is a warning every day:

the leisure of luck does not apply.

are crossed off with no celebration:

no ex-wives, no ex-kids for me;

my parents are decades dead.

So I salute the Sundays as any other—

late sleep, the paper spread across the couch.

I’m a man of restrictions and reflex,

Careless with their pain,

my parents knew only injury, only oblivion.

I watched them tapping off cigarettes,

whispering in the morning.

I took from them disregard, a cold hand,

how to tilt the map toward home.

R.T. Castleberry is a widely published poet and social critic. He was a co-founder of the Flying Dutchman Writers Troupe, co-editor/publisher of the poetry magazine Curbside Review, an assistant editor for Lily Poetry Review and Ardent. In 1999, his work was chosen for the Metro Downtown Transit Streets Project “Texts In Context.” The “Texts In Context” project uses historical documents, poetry and prose from authors with a Houston or Texas connection to illuminate Houston history. The 100 texts chosen were engraved on 2ft X 2ft. granite paving stones and placed at sites in downtown Houston, TX in 2004. His work has appeared most recently in Santa Fe Literary Review, Caveat Lector, Comstock Review, Green Mountains Review, The Alembic, Paterson Literary Review, Silk Road and Argestes. He was a finalist for the 2008 Arts & Letters/Rumi Prize for Poetry. His chapbook, Arriving At The Riverside, was published by Finishing Line Press in January, 2010. An e-book, Dialogue and Appetite, was published by Right Hand Pointing in May, 2011. 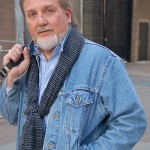