One Eye Open by Marybeth Rua-Larsen

Belina lay on her left side, facing the wall, pretending to be asleep while she waited for sunrise to slip through the slats in the window shade and into the room. She should know better by now, but she couldn’t let go of the thrill of meeting someone new and getting caught up in the moment. There was something about anonymous sex that pushed everything else away – the fact that her phone service would be turned off because she couldn’t pay her Verizon bill, that her mother was coming to visit and both her refrigerator and pocketbook were empty, that her boss, whom she secretly loved but was married, hadn’t paid her in a month because his dry-cleaning business was in the toilet. He knew he could count on her to “stick it out a bit longer.” She did, and she was grateful that a short skirt and a dark bar provided its usual opportunities for being someone else.

She lay there trying to remember his name – Jack? Jeremy? No, Jordan. Maybe. She heard him turn on the shower and hoped, like most of the others, he’d rush off to work or somewhere to avoid that morning-after awkwardness. She couldn’t picture his face clearly or remember much about him, other than he paid for drink after drink and nuzzled her neck before the groping started.

She remembered, then, the summer she’d turned thirteen, the last summer her father was alive. He’d taken her to Florida in January at the end of Christmas vacation. She’d wanted to swim with the dolphins, but she couldn’t talk him into it. “They’re the

strangest mammals,” he said. “They sleep with one eye open. They never fully trust.” And it made her want to swim with them all the more.

Marybeth Rua-Larsen lives on the south coast of Massachusetts and teaches at Bristol Community College. Her poems, essays, flash fiction and reviews have appeared or are forthcoming in The Raintown Review, Angle, Cleaver, The Poetry Bus, Measure and Unsplendid.  She won the 2011 Over the Edge New Writer of the Year Competition in Poetry in Galway, Ireland, and her chapbook Nothing In-Between was recently published by Barefoot Muse Press. 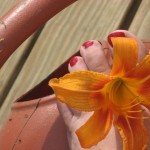