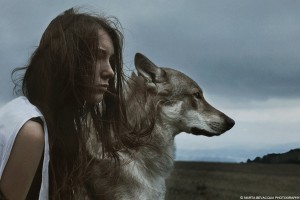 Yeah, the wolf was real, but

that doesn’t make the story less

stupid, and, frankly, so familiar–

I’m just a rip off of a facsimile of

a copycat. A dime a dozen

Oh, I would’ve liked a tale with some

thing different, something fast and racy.

One where I didn’t have to traipse.

The wolf, let me tell you, was so

but I rubbed his balls, he purred.

No matter how far ahead I read,

I couldn’t get out. Somebody made

sure of that. The ending was sealed

tight as a princess’ legs. So

and ammo as best I could. The mall

If you look closely at a text,

you can almost always find a loophole.

I did. One where I could wiggle

my little trigger finger through.

Step one: take out the beast.

Step two: figure out what

Step three: prep for the reporters.

How does freedom taste?

sharp and salty, with filaments of honey,

Lucy M. Logsdon’s work has appeared in such publications as Poet Lore, Nimrod, The Southern Poetry Review, Sixfold, Seventeen, Conclave, The California Quarterly and Gingerbread Literary Review. She has received a Macdowell Writers Colony fellowship, and taught at such places as The Frost Place and the 63rd Street Y. Currently, she teaches at Southeastern Illinois College. She received her MFA from Columbia University. In her spare time, she raises chickens, ducks and other occasional creatures with her husband. 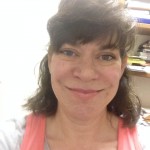