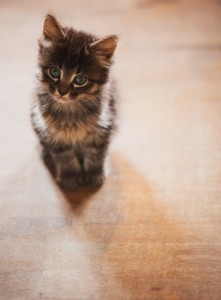 Mr. Cheese died when I fed him a Brillo Pad instead of his rice cake. It was an honest mistake. I was scrubbing the grout in the shower when he started licking my feet, his hunger sign. I took him downstairs, the cleaning pad still in my hand, and pulled a rice cake out of the pantry. When I got back to the grout, the rice cake crumbled between my hands and the tile. I knew right away that Mr. Cheese was a goner, but I still rushed downstairs to do what I could. I would’ve tried mouth to mouth, but he looked so peaceful with his crescent moon smile.

I needed time to mourn. I called work and scheduled three days of bereavement. They wanted to know who died. The words “my son” just blurted out. My son Michael was in Montana, doing some sort of field work. We hadn’t talked for years. I guess he was kind of dead. And Mr. Cheese was more like family than my real son.

Work said they’d send flowers and asked about the arrangements.

“I still need to make them,” I said. I hung up, sobbing. I called a funeral home.

“I need to schedule a funeral,” I said.

“I’m so sorry for your loss,” the man replied. He wasn’t sorry. I could hear the ch-ching in his voice.

“Would it be easier if I came in?” I asked, not knowing what else to say.

We scheduled an appointment. I put Mr. Cheese in my good gym bag and headed out.

“Who are we making arrangements for?” the funeral director, Mr. Smith, asked.

“I’m so sorry. Are his belongings in the bag?”

The man cocked his mouth into a corkscrew. “I’m afraid I don’t understand. Did you have him cremated already?”

I wished I had thought of that. I could’ve burned him in the fireplace and brought him here.

The director’s head jutted side to side. He looked like a curious little cat.

For the next hour, we pounded out the arrangements. Visitation that night. Funeral the next day. Closed casket. I would pay for the works, as he called it, but he would really only provide minimal services. Then I had to pay a little extra for the fake documents he would whip up. He knew a guy who did quick work preserving pets. Apparently some people stuff their dead animals and put them by the fireplace. They lock them forever in some weird positions that make them look alive and loyal.

“Sounds great.” I handed over the credit card to pay the fifty percent deposit.

“Again, I’m sorry for your loss,” he ch-chinged. I could hear the gold coins clanging against his throat.

I called work and told them the arrangements. Then I told everyone I could think to tell that my son Charlie was dead. Charlie Cheese, as we called him.

Hundreds of people showed up to the visitation. There were pictures all around of a scholarly young man who sort of looked like me. I found it on the internet. The boy’s hairstyle was even the same as mine had once been.

“We didn’t know you had a second son,” some of the mourners said.

“Yeah. It was before Deb and I got married. And well before Deb passed.” I hung my head to show my deepest sorrow.

I was exhausted after the wake, but I had to get up early the next morning for the funeral. Work sent a huge floral arrangement, like that was supposed to make me feel better. All it did was make me sneeze.

In the morning, before the funeral, the director, Smith, opened the casket and told me to say goodbye. Mr. Cheese looked fake. They had taken all the life out of him. The crescent moon smile had waned away.

Smith closed the casket, patted me on the back, and squeezed out a tear. He dabbed his face with a handkerchief and asked if I would be okay.

“I’ll be fine,” I told him. Then we loaded the casket into the hearse and drove two blocks to the church.

The church was packed. If the front row hadn’t been reserved for me, I wouldn’t have gotten a seat. I didn’t know half the people there. Apparently my son had been a very popular man. 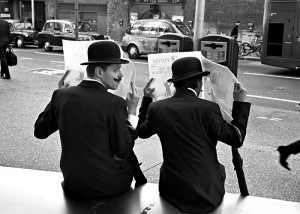 “Who are all these people?” I whispered to Smith as he ushered me up the aisle.

“Why, these are your son’s friends. Everybody loved Charlie.”

The priest gushed for almost thirty minutes about how great Charlie was. He’d done so many wonderful things. He’d even founded a charity to help cancerous cats. I sobbed the whole way to the cemetery.

Watching them bury Charlie was the most painful moment of my life. Worse than when Deb died. As they say, a man isn’t supposed to bury his children.

“So, what did you think? Did we put on a show, or what?” Smith asked after everyone left.

I cried on his shoulder.

“What’s wrong? I thought you would be happy. We did it. We got you out of those days of work.”

Smith reassured me and told me the bill would arrive soon. Then he asked if I wanted a proper burial for Mr. Cheese in the pet cemetery. I told him I didn’t have the heart or the money to bury anyone else.

Nathaniel Tower is a former English teacher who now spends his days at a computer. When not at work, he writes fiction and manages the online literary magazine Bartleby Snopes. If he’s not writing or editing, he’s either spending time with his wife and daughter, listening to records, or going for long runs while juggling. His short fiction has appeared in over 200 online and print magazines and has been nominated for the Pushcart Prize and Million Writers Award. His first collection of short fiction, “Nagging Wives, Foolish Husbands,” was released in 2014 by Martian Lit. Visit him at nathanieltower.wordpress.com 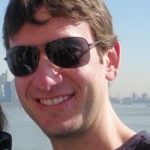