Cascadia stands on the foot of the bed, arms spread against the window’s light. Her elbows bend at odd angles as she reaches around behind herself, and the bra comes off. She holds it to one side, the cups burnished by sunlight, margarine just beginning to melt.

“Life is a storm,” she says. I imagine that quirk of a grin appearing on a face hidden in shadows of hair. Her face, my face, it doesn’t matter.

“I feel ions flowing out of me,” she says, “a shining skim, the real Cascadia.” Her chin lifts, and now I do see her smile, her eyes, everything. “In moments like this, Charlie, nothing is real but my love for you.” The bra flutters down.

Her panties will be next. I try not to think of that as my gaze drifts down the bulge of her stomach, the light between her thighs. My body responds. Shame chills my face. I want to love Cascadia, and I do, but not in this instant. In this instant I want to feel the flesh of her part around mine, the slickness of her mouth on mine.

Lightning cracked the sky in jagged spurts. My skin reached; a tickle spread through my gut. Thunder. I shifted the gas can to my other hand and walked faster into the salt-wind that blew perpendicular to the bridge. My car had run out of gas again. I really needed to have the gauge fixed, but mostly I needed a raise.

There wasn’t much traffic at one in the morning which meant fewer opportunities for someone to pull over and help. Not that anyone ever did. Too risky. Who knew who was carrying a gun these days, or a knife. Bayonet? I laughed at that, and for a step or two I stood outside the storm, outside the night.

She was standing on the bridge rail, one arm pressed to a support beam, the other thrown wide open to the wind. I don’t know how she didn’t fall. Rain pattered down plop-plop-plop against the plastic can. I felt it in my hair, small explosions, tiny shrapnel.

“Hey,” I said, and I thought maybe I should feel foolish, she wasn’t real, just shadow, a pattern of cables, a temporary cohesion of rain. The feeling passed.

Her head turned. A tendril of hair smeared her cheekbone. The corner of her mouth ticked upward–the most beautiful grin I’d seen, I don’t know why–and she said, “Hi there, do you come here often?”

I wanted to reach, felt the molecules of my being extend, and the air charged, beautifully unbearable as if God had swept His brush down, loaded with the glory of a new dawn, the satisfaction of a day well lived.

“Please,” I said. She was going to jump, and I couldn’t let that happen. “Come down, we’ll have coffee.”

Her foot turned, steadied. She swung the other foot past it, swung her free arm to the support, turned, stopped, turned, until she faced me. There was blood on her shirt, blood on her hand. I felt a jolt of panic. I stoppered an impulse to run. The rain was washing her; soon she would be clean.

She laughed and the sky behind her lit with the storm. A skyscraper profiled in the gap between her knees. I wondered how far that building was. Was someone seeing us from one of the tiny windows that must be there?

“Let me help you,” I said. I took a step. She leaned away, smile strained. I stopped. “My name is Charlie. Charlie Simmonds.” I started to extend my hand, remembered the gas can, and frowned.

“You have your own worries,” she said. “You don’t need to take on mine.”

“No,” I said. I bent my knees and set the gas can down. “This is nothing. I’m always running out of gas.”

“Me too,” she said. She wiped the back of her hand across her face. I wondered how much of that wetness might be tears.

“We have something in common.” I shuffled a half-step toward her. “What’s your name?”

“Cascadia,” and there was the grin again, lopsided, playful. It made me want to hold her like a kitten, stroke her ears, feed her chicken kibble. I slid my foot forward. A gust blew hard enough to push her wet hair over one shoulder.

“Please come down, Cascadia, it’s dangerous there. Whatever’s bothering you… we’ll solve it together. Come home with me, we’ll talk, it will be better in the morning, you’ll see, it’s never as bad as it seems in the night…” I sighed. “I’m babbling. Sorry.” I offered a smile. “I have soup.”

“You seem nice,” Cascadia said. Her grin became a smile, sad and sweet.

“I am,” I said. Loneliness gripped me. I hadn’t realized until that second just how empty my workaday life had become, endless repetition, meaningless drama, rotating relationships, one office cubical after another as if that was the only discovery open to me. “I’ll be anything you need,” I said, “just, please, come down, okay?”

“Can’t do that,” she said. Her grip on the support eased. I wanted to lunge, but stopped myself. I would never reach her.

Cascadia flexed her hand. “I did what I had to.” Blood squeezed from a cut on her palm, diluted in the rain, and fell away. “He won’t hurt anyone again.”

“No time,” Cascadia said. “Do you like storms, Charlie? There’s such power in a storm.”

“Yes,” I lied. I’d never thought much about storms, other than closing the apartment windows and hunkering down with the cat while the lights flickered.

“I feel ions flowing out of me,” she said. “A shining skim, Charlie, the real Cascadia.” Her eyes met mine, hard and soft at the same time. “This is how I want you to remember me.” And she let go. I sprinted to the rail. Too late. I saw her face, calm against the dark background of the water. A splash I did not hear, and she was gone.

I wanted to follow her. It took all my will, my entire reasoning power to stop myself climbing onto the rail and jumping after Cascadia.

I open my eyes to brightness. There’s no one at the foot of the bed, no one to block out the light. I glance at the digital clock’s unforgiving red numbers and roll to the edge of the bed. Time to shower and shave, and begin again.

Stephen V. Ramey lives in beautiful New Castle, Pennsylvania, an industrial power in its time, now beginning to reinvent itself as an arts (and fireworks!) Mecca. His work has appeared in various places, from Beneath Ceaseless Skies and Strange Horizons to Microliterature and The Journal of Compressed Creative Arts. Find him at:
http://www.stephenvramey.com. 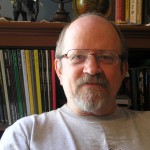