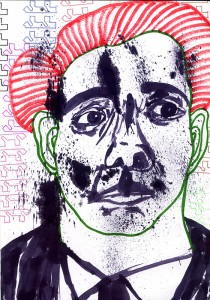 He was on a bridge when he first thought of killing himself. He was in Glasgow for a conference late one July. He rented a flat for three nights on St Anne’s street, just across from the botanical gardens. The university was a fifteen-minute walk.

Theresa, the heavyset landlady, explained the flat and told him about things to do while he visited. He half listened, paying more attention to her lilting Glaswegian accent. She had a broad, welcoming face, and amused, startling blue eyes.

He nodded—smiled and nodded again.

He watched the street for a while after Theresa left the flat, then turned back to the pamphlets scattered over the small table. The conference didn’t start until that evening, so he had the day to explore. He knew he shouldn’t sleep.

He picked up a pamphlet at random. The Glasgow Boys, it read. He scanned it. He could, apparently, take the subway and walk up to the Kelvingrove Art Gallery and see an exhibit of the Glasgow Boys, a group of artists who worked and lived in Glasgow at the turn of the century. He grabbed his bag and headed out, carefully locking the door to the flat with the skeleton key Theresa had left

He wandered through the gallery, taking in the paintings. After an hour, he found himself standing in front of a painting showing a young man in armour. It looked classical, but he wasn’t sure, and he felt too stupid to continue looking. He left the gallery in a dull fog of jet lag.

He decided to walk back to his flat. His GPS could take him. His walk took him along a little river, nothing like the Fraser back home. It must be the Kelvin. Then he came to the bridge.

He stopped in the middle of the bridge to look down at the water. Then it struck him. He could jump—just like that, jump into the gently flowing water and disappear. The problem was that he could swim, and it wasn’t that far down.

He was surprised he had even thought of it. He didn’t think, or hadn’t ever thought of killing himself. But here he stood, on a bridge, spanning this Scottish water, banks to either side. It was…inviting.

Jet lag, he thought, and hurried on his way.

The conference lasted for three days. He was engaged, gave his paper on Hardy’s Eustacia Vye, and contributed during the sessions. But something about that moment on the bridge didn’t want to let him go. It nagged at him, needling his brain with a persistence that surprised him. The thought of standing on the bridge and looking down at the water stuck in his mind. He filled in details as he remembered. He had been looking upstream—a broad, gently rippling stream, a footpath to the left, trees clustering along the steep right bank. Did he really see that family of ducks feeding along the bank?—or did he make it up?

Term followed term, and he began seeking out bridges whenever he travelled. He walked Black Friars Bridge in London. He took a cab over the Golden gate in San Francisco, staring down into the bay, and later standing on a Warf to stare across the bay at the bridge. He drove the Confederation Bridge from Nova Scotia to Prince Edward Island, only seeing oncoming traffic and the lane ahead and behind, and having to imagine the drop to either side into the Northumberland Strait.

When he could, he always walked a bridge, pausing somewhere in the middle to stare down at whatever lay below—whatever drop or body of water this particular bridge spanned.

He never had the urge to jump as he did standing on the bridge over the Kelvin. He didn’t know why, and he told no one. But these structures had a hold on his imagination.

They were the spaces between one thing and the next, one place and another. They were a solidity offering a suspension of being or of self, a space he couldn’t seem to find anywhere else in his life, a between place that held possibility, a place where he could choose. Was that it?—the choice to kill himself or not?

He was in another cab, on his way to another conference. He took a hotel on the recommendation of a colleague, even though it was less convenient than being downtown near the conference. Sue, the colleague, had suggested he walk the avenue outside his hotel.

“It’s quaint,” she had said. “It has lots of small shops and coffee places. There’s an old movie theatre, too, and I think it’s all near the university—but I can’t remember. Anyway, I know you like to explore the places you visit, so check it out.”

Her suggestion was more a directive. She was hard to resist that way. She had an intense, slightly chaotic presence, and she always stood too close to him, her straight, black hair catching the light, and her beautiful, almond eyes watching him. She wasn’t interested—he was sure of that. It was just her way, like many of the women he had known—to them, he was a curious, nonthreatening, self-effacing blur.

Check-in wasn’t until three o’clock, so he stowed his bag with the desk and went for a walk. The spring afternoon was sunny, but he shivered inside his jacket. The street was full of people, walking, talking, and laughing, all with somewhere to go. Most of them didn’t seem to be wearing enough clothes. He counted half a dozen young men in T-shirts, and innumerable young women in skirts or capris. It was like being among another race of beings that didn’t feel the cold.

He was in a cab by five o’clock. The driver told him the conference hotel was across the river. A river meant a bridge.

He leaned forward from the back seat to see where they were going, only half listening to the driver telling him about this northern town. They were descending into a steep, wide valley with a river running at its bottom. He had never seen anything like it. They were heading for a bridge built low to the river, a framed structure with a metal deck that hummed beneath the tires of the cab. Something made him glance to his left. He caught his breath.

Outlined against the sky, leaping blackly from steep bank to steep bank of the valley, was a bridge. It loomed over the river. It reached like a black, webby finger from one bank to the next—the appendage of a giant, or of a god. He craned his neck to look up, glimpsing cars speeding along the deck in the opposite direction.

Of course, he had questions, but they were soon driving along the river, then up a steep hill into the downtown. He made some notes on his phone, and tried to pull his thoughts together. He had to pay the driver; he had to register for the conference; he had to give his paper the next morning.

Skipping the conference entirely on Sunday, he got directions from a bored young woman at the desk, who patiently answered his questions. He paused long enough in the coffee shop attached to the hotel for a good coffee and a questionable breakfast sandwich, then headed out. He wore an extra sweater under his jacket, but he was still cold. He thought he would warm up as he walked. It wasn’t far, at least he didn’t think so, but distances were harder to judge in new places.

His GPS took him up the avenue for several blocks, then right on a busy street. It was crowded with cars and trucks and buses, people hurrying by on both sides of the street. He passed restaurants and pubs, small inscrutable shops, and a school set back from the main road. Then he saw it—the approach to the bridge, like the open maw of some black metal dragon. He crossed the street. The north-bound traffic headed down into the valley, while the south-bound traffic emerged from the bridge. The sidewalk took him down a slope, past another coffee shop, a cake shop, a small theatre, and on to the approach of the bridge.

Walking along the bridge itself was noisy and cold. The wind cut through his jacket, making him gasp. Traffic roared by to his right. He looked down at the valley that opened up below—the river a flat browny-grey in the thin sunshine of an April afternoon. The woods that flanked the river to either side were still winter brown—no signs of spring. He saw another bridge, farther west along the river, and as he watched, he saw a train speed silently across its top.

He paused in the middle of the span, staring down into the river, more than a hundred and fifty feet below—one of the facts he had gleaned about this bridge. He watched a crow, flapping its way between two of the giant peers.

And standing on that bridge, the roar of the traffic at his back and the biting wind in his face, he felt free to make a decision. The muddled sense of guilt that never left him alone, his work at the university, his failed marriage, his long dead parents, the sister he never spoke to, and Roddy—oh Roddy—all faded into the background. His pointless, day-to-day life fell away from him like discarded clothes. He stood, a point of consciousness, suspended between water and sky, in an exhilaration of being he had seldom known. Here was freedom; here was choice. And he felt hot tears fill his eyes, as the cold metal of the rail bit into his hands, and the wind of spring stung his cheeks.

William Thompson teaches children’s literature for MacEwan University in Edmonton, Canada. He is totally blind, and does all of his work electronically. He maintains a webpage at www.OfOtherWorlds.ca, and has two collections of short stories—The Paper Man and Other Stories, and Fractured and Other Fairy Tales—both available on Amazon.

He has published nonfiction with Hippocampus Magazine, and his short fiction has appeared in The Penmen Review, Flash Fiction Magazine, and The Flash Fiction Press. He considers coffee a food group, and he loves to walk and read, usually at the same time. 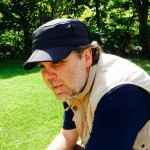