Thomas H’s photographs are deliberate and intentional. Each image opens up into a fantastic story of it’s own, painting a scene–a setting for a story to take place in. It makes you question and wonder and ponder the thought behind the lens. It’s impossible to view Thomas H’s work and not to take in the beauty of these vivid settings; be it a the serenity of a lush forest, or the personality of a painting balancing preposterously on a bench. Many of Thomas H’s photos portray instances and moments that immediately make you look for more–a man sneaking a drag from a cigarette outside on a bench, a station wagon on the side of the road with an open door. These photographs capture the sense of someone roaming the world they inhabit, finding the magic that others overlook. 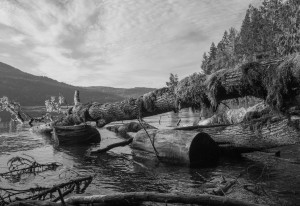 Please check out Thomas H’s work on his Flickr Profile

What sparked your interest in photography, and when did you know you would pursue being an artist?
I’ve always had an interest in the visual arts. Many years ago, I picked up a used Pentax film SLR, and began making black and white images; but life intruded, and I got busy with other things. About ten years ago, I received a camera as a gift, and it reawakened my interest. Plus, I now have more time available to try improving my photography.

What other artists and art forms have influenced you and your work?
Painters have been most influential for me, especially the German Expressionists – Franz Marc, Emil Nolde. For the representation of people: George Grosz, Otto Dix. Other artists: James Ensor, Giorgio de Chirico, Eric Fischl. Magritte’s painting – The Empire of Light – has been a profound influence for me.

I like to examine the work of painters when thinking about how to make photographs, because painters put so much thought into their work – they will be investing a lot of time in the creation of one piece. As a result, they give careful consideration to color, form, placement of elements in the composition, etc. One way I evaluate my photographs is to ask myself ‘Would I have spent the time and painted the scene this way: would I have included these things, would it be better if more/less was present in the frame?”

Can you describe your current artistic process, habits, techniques you have formed?
Mostly I just walk or drive around, trying to pay attention to my surroundings, looking for things that are visually interesting. Same thing walking down the street: I look at people; I look for interesting faces and expressions.

Is storytelling important in your photography?
I certainly won’t pass up an opportunity to make a photograph that tells a story, should the opportunity arise; but it isn’t my primary focus. I’m more concerned with the visual impact of an image, and its ability to elicit a response or reaction in the viewer that might arise from a different place than the story-making part of our brain. It’s an attempt at communication that bypasses the verbal.

What are some of your favorite books, poems, authors?
There have been a number, over the years. Cormac McCarthy is a current favorite. Others that come to mind: Vladimir Nabokov; Paul Theroux; Henry Miller; Charles Bukowski; Tom Robbins and Kurt Vonnegut; Simone de Beauvoir; Larry McMurtry. Harry Crews is a great read.

Where do you turn for motivation and new sources of inspiration?
The two major areas of focus have been scenes at night; and people on the street. Night presents me with an opportunity to attempt to reveal the extraordinary that inhabits the ordinary. I focus on scenes that would often appear mundane, or would pass without notice during the day; but the change in light, shadow and color that takes place at night, creates potential for a change in perception of these otherwise unremarkable objects or scenes. What I’m looking for in the night shots, is to present the viewer with images that encourage the change in perception.

When photographing people on the street, I’m motivated by a desire to make a visual exploration of the people amongst whom I live. We pass by so many people during a day without noticing them, oblivious to the fact that each one is a whole world, a whole lifetime. Of course all of that can’t be caught in an image; but at least I can pay them some attention, and make photographs that attempt to answer the question: :”Who are my neighbors?’, using that term in its broadest sense.

What is the role of community and gallery showings to your growth as an artist?
It hasn’t played a large role until fairly recently, when I’ve begun exploring some of these opportunities. There is a satisfaction that comes from seeing the images in a larger, tangible format; and also in interacting with people as they view them.

What is a project, or theme you are currently working on, or something that is currently taking your attention, that you are aiming to explore in your work?
In future, I’d like to focus attention on expanding the themes I’ve been working on here at home, to other places. I’ve recently had an opportunity to photograph in Mexico City. I want to return there to work more extensively. Cuba is another place of interest.