I speak and the world rushes. Why? Who knows? Perhaps if I tied a tape recorder to my tongue, and captured all of my thoughts as they left my mouth I would eventually pen a piece worthy of immortality. Glue your fingers to keyboards, and plug your brain to the World Wide Web, we need to scoop the essence of our time into immortality. The 21st century will live forever! We dance around the flames of oblivion. Our thoughts are immortal! We tweet a twitter as we scroll down digital walls festered with the graffiti of our lives. Like. Share. Comment. Life in a digital age. The old timers bitch and moan because that is their function. Socrates saw writing as the downfall of society. Modern day Socrates see technology interviewing for the position. But we survived alphabets and we will survive Youtube. But we won’t survive the planet spinning off its axis, or a solar flare, or 19th century industrialization moving at a 21st century pace. I know because I read about it online. Make me a cyborg. Plug me in. Tune me out by tying me in. I want to live forever. If I create a digital copy of myself online and future scientists bring it to life and then a future time traveler comes back to take me to their present, my future, someone’s past, and I talk to my animated digital self, what kind of conversation will I have? Will it like me? Will it share me? Will it comment? Be true to thy digital self. All user profiles jive to that singular truism.

and chases that went on and on

and ended with legs growing

The Sandman and his army of angel

and dusted the world with coat

But it was futile.

of psyches, riding mounts that

the slumberous across twisted dreamscapes.

The Sandman fought, until,

he thought maybe he, too,

So he gathered his sand and washed his face,

opting for a newer service

And they got up,

So, people were randomly dropped,

As ghosts they wandered the Earth

searching for service, texting and calling

Wes Bishop is a PhD student in American history at Purdue University. His poems, short stories, essays, and reviews have appeared in Write Me a Metaphor, Flights, Addicting Info, and Gently Used Literature. He lives in West Lafayette, Indiana with his wife Allison. 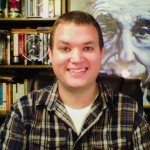