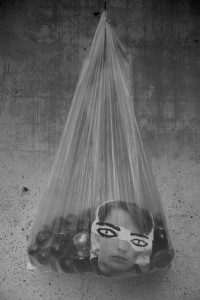 After my divorce, a hurricane sweeps through and uproots a large oak tree in my front yard. It leans far to one side, its branches piercing the ground, and leaves a pocket of space between the trunk and the yard, something small enough for a cat to die under. The soggy roots pull a moon of lawn with them and leave it ajar, the way the seat of a cleaned toilet sits suspended above the bowl. Muddied water has pooled underneath and inside I find tadpoles, salamanders, and a rusted lunchbox. A scratched football is painted across the tin lid.

In my sink, I rinse the grime off the box and try to pry it open with a fork. It doesn’t budge. I find a hammer in a drawer and use the pronged back to jimmy a corner of it open, but the other half sticks shut. It’s too early to hassle so I toss it and grab a cold slice of pizza from the top of my fridge.

My phone rings and it’s Koby. He wants to bring over breakfast and bourbon and watch the Jaguars game. They are playing in London which means 9:30 start time on the east coast of America. When he pulls into my driveway it’s 8:45 and he sits in his car, a shiny foil in his hands. Koby likes to eat Pop-Tarts in his car because the radio sounds better and the bits of exhaust that creep through the air conditioner pair well with the glops of frosted fudge on the side of his teeth. He is divorced, too, but has been for years now.

“It’s not carbon monoxide poisoning in the same way that one beer doesn’t make alcoholism,” he told me once.

My ex-wife left the television and the wireless receiver but I can’t find the remote. This seems sufficient reason to dial so I do. She answers out of breath.

“I’m training for my jump. What do you want?”

“Where’d you put the TV remote?”

Koby drops the bourbon and McGriddles on the couch. I find the remote in a pile of dirty laundry underneath the coffee table.

He surveys my living room. He tosses pizza boxes off the couch, scoops a crushed Christmas ornament from my coffee table. It dangles like a half-eaten apple. All around my house are crushed ornaments, a single clutch each, all in one night. The scabs of my palm reopen every day.

“Let’s watch outside. It’s a beautiful day,” Koby says and tosses the pizza boxes onto the floor.

We pull extension cords and dirty rope from my garage and tie the television and receiver to the drooping trunk of my fallen tree. The leaves provide enough shade that there isn’t a glare. There’s a nest teetering between two branches. An osprey snoozes inside. We each take an end of the couch and pull it to the front yard. The lawn is still soaked and the bottom of the couch sits loose, bobbing side-to-side as a docked boat would. We eat our McGriddles and share the bourbon.

Around the same time as kickoff a man our age crawls from the hole where I found the lunchbox. He wears a slimed Jaguars jersey and carries a six-pack of something foreign. “You guys see my lunch?” he says and I tell him to check the counter by my fridge. When he returns outside, lunch box in hand, he catches the flashes of the television on the tree. “Shit, you got power? I don’t think anybody else does.”

I might be the only house that didn’t lose power because the last couple of nights people have stood in the middle of my street and watched me through the window eat hot pizza on the floor. They’re all wet as can be, arms crossed and faces long. I’m not sure if it’s envy or resentment, but it permeates my walls and makes me belch vomit flakes so now I try to keep my curtains shut.

“Mind if I watch with you guys?”

Koby scoots over and the man takes a seat. He holds the lunchbox in his lap and takes a sip of our bourbon. The Jaguars score an early touchdown and we trade high fives.

From my backyard comes a gaggle of teenagers. They carry a deflated football and wear teal bandanas. “Oh, man, is it cool if we watch?” they all say at the same time. Most of their faces are shaded with dirt, Adam’s apples swollen with puberty.

Koby and I grab all the dining room chairs and the recliner I keep in my bedroom since my ex-wife took our mattress. I tell Koby we should probably prepare for more people and we dump all the books out my bookshelf. We drop it face down in the yard so newcomers can use it as a bench.

A woman our age crawls from the tree hole. She wears a long t-shirt that says COFFEE ADDICT across the chest. “Trevon, what happened to grocery shopping?”

The man on the couch with us says, “They’ve got power. Let me watch the game.”

The woman rolls her eyes and crawls back into the hole. The osprey shakes its wings.

The bourbon is shot and Trevon opens one of his beers. “She’s the best thing that ever happened to me,” he says.

My neighbor, Kaila, from across the street comes out to grab the paper, but walks past it and takes a seat on the upturned bookcase. She sips her coffee and smokes a cigarette. She cheers when the Jaguars force a fumble. Sometimes I forget we slept together and it makes me sad. I should think about it more.

Maybe I don’t because the sex was sad. My ex-wife had only been gone a couple nights. Kaila asked me to fix her fridge, gave me a beer and a sandwich. It was stupid, really, the way she wore a large shirt and no bra. Her fridge needed a new bulb. When we fell on her couch and I slipped into her, pants around my ankles, she kept whispering “finally” over and over, her breath stale from cigarettes, nipples mangled by piercings. It wasn’t long until I was limp and out the door.

Soon my lawn is full. Strangers are happy to sit in the mud as long as they can watch the game. A family brings a backseat full of pizza and Donald from the gas station brings more beer. We drink, feast, and somehow root for the same thing.

At halftime the Jaguars are winning and I see my ex-wife on the television. She’s sitting inside of a helicopter hovering over Wembley Stadium. She wears a black and teal jumpsuit. A gold cape rests on her shoulders. The announcers tell us she’ll be free falling into the stadium to raise money for charity. If we want to donate, we can dial the number below: 1-800-BAD-IDEA. They ask her if she’s ready and she shoots the camera a thumbs up. Then she jumps.

She falls out the helicopter quicker than I drop my beer.

Trevon opens his lunchbox and the power cuts. My television turns black. Everything is cold silent for a while. The teenagers groan and Kaila tosses her cigarette in the mud, returns to her home across the street. Trevon pulls a folded sheet of paper from the box. “She traded my sandwich for a grocery list,” he says. He tosses the lunchbox into the hole and takes off down the street. Everyone else scatters like disaster.

Inside I flip the switches of my circuit breaker, hoping it will jump the electricity back but the power remains off. Koby stands outside, beer in one hand, remote in the other. He clicks the power button repeatedly. “What’s next?”

My lawn is upended. Bottles float in the surged grass and the chairs lay flipped from the abrupt evacuation. Without the game on, my yard feels like a landfill. My ex-wife is afraid of flying, maybe she wasn’t the woman I saw.

I pull my phone from my pocket and dial 1-800-BAD-IDEA. It rings five times and a woman answers. She thanks me for choosing to donate. “Five, ten, or really any numerical value. We’ll even take fractions of a dollar. Bitcoin if you’ve got it.”

“I’m sorry, but if you aren’t going to donate, we need to keep our lines open.”

“I’ll give you twenty, just tell me.”

“She was amazing. She was a bullet then an albatross. A bomb and then an angel. When she landed I thought there was an earthquake, the applause was unanimous. She never opened a parachute, either. My coworker is convinced she flew. The stadium played that song, the victorious, bombastic piece. You know the one. She removed her helmet and her hair waved to the crowd. We only have a handful of men working the phones, but all of them are in love. Literally. Each of them said so. A few of the women, too. America is proud. We can believe again. Will that be card or ACH transfer?”

I donate fifty with my credit card because I know the jumper was my ex-wife. My ex-wife with the fear of flying is jumping out of planes and I’m sloshed in a swamp of garbage. Koby’s returned to the Pop-Tarts and radio in his car. I grab a bag from my garage and pick the bottles out of the ground. I stack the pizza boxes inside and carry the chairs into the garage so I can wipe them down.

Trevon’s wife crawls out of the hole again. She holds his lunchbox. “Did he go shopping?”

I nod, though I hope he’s run away forever.

“He’s a good man. Just got to let him simmer,” she says and dips back into the hole.

I untie the television, let it sink into the grass and pull the ropes to Koby’s car. He hops out and we loop them through the hitch. When we think its steady, Koby sits in the passenger seat so I can have the wheel. I pull the car around so it faces the street and hit the gas. We reach the middle of the street before there’s any tug. The tree slowly rises, a morning stretch. The nest falls below and the osprey flies away. On the radio a Jaguars player has to be carried off on a stretcher. Soon I’m running over the paper in Kaila’s driveway. The tree stands tall, though it still leans a bit. The posture seems irreparable. The hole in my yard is sealed.

Koby drives home. I order more pizza and wait. From the window I watch Trevon return with two handfuls of groceries, all smile and gut. When he spots the tree upright, he drops the bags, lets out a yelp. He studies the angle of the trunk then throws his weight into it. The tree shakes but doesn’t fall. He throws his shoulder into it again. And again. The tree leans a bit each time. The pizza man pulls into my driveway. He watches Trevon throw himself into the trunk. On one hit, the power cuts back on.

Caleb Michael Sarvis is a writer from Jacksonville, Florida. He is the fiction editor for Bridge Eight Literary Magazine and received his MFA from the University of Tampa. His work has been featured in or is forthcoming from Hobart, Panhandler Magazine, The Molotov Cocktail, Barrelhouse, Oyster River Pages, Yellow Chair Review, and Empty Sink Publishing. You can follow him on Twitter @calebmsarvis or come to Jacksonville and grab a beer. 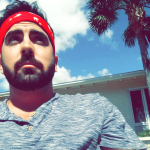