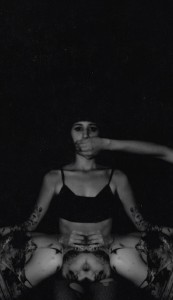 The husband gets angry when the wife acts a certain way in public. This always takes her by surprise. It happens today while they are retrieving the son after his second day of summer science camp. Having arrived early, they sit down to wait on a picnic bench beneath a large shelter because the sky is heavily threatening rain. The wife sets the baby down to play between their feet and immediately the baby spies the water beetle. The campers caught it yesterday at the vernal pools. It is still scrabbling weakly at the walls of its plastic tub today. It is flat and black with six jointed legs and the size of the wife’s big toe. Both the baby and the wife stare at it. They are less afraid of it than yesterday.

Before long two counselors approach from a grassy area outside the shelter where the campers are playing musical chairs with a third counselor. At first the wife sees it as mildly interesting that they want to talk to her today, after she has put on a nice white shirt and brushed her hair and brought the husband along. The husband is wearing a nice shirt too, a collared spring green one with tiny white checks that makes his skin glow. Hers is collared as well, maybe in unconscious symmetry, or maybe because over the years their tastes have converged. But yesterday, when she wore an old t-shirt with her hair in a messy bun and came alone, the boy counselor now fast advancing took one look at her and turned away, while the girl following more slowly behind handled her like she was the water beetle.

Today as the boy counselor nears, the wife feels a kind of halo start up all over her, an air-brushed spotlighting of colors and shapes and sounds that confirms her first impression: today is a good-looking day. Some days are. Others she kind of sinks to the bottom of things. A lot depends on how internal she’s being, in addition to how she’s dressed, and whether or not she’s with the husband, although each of these determines the others to some extent. The husband never projects a halo because he always goes fully internal when he’s out in public. Being very tall and black he says he’s learned to, otherwise people—meaning white people—are afraid of him.

The boy counselor hands the wife a clipboard to sign and then stands there shifting his feet. She feels an expanding expectancy for someone to speak, along with a sinkhole sensation from the direction of her husband that means it’s not going to be him. Over-brightly she says, handing back the clipboard, “You got lucky today!” She means the rain, which has held off so far, and only recognizes the double entendre when the boy flinches. “It’s going to rain tomorrow though,” he says, so quickly and definitively that she blurts out, “Hard?” thus making them both flinch, although you can’t see hers beneath her halo.

Then the girl counselor steps up and the boy fades back and the wife finds herself, bizarrely, saying the same things twice—“You got lucky today” and “The rain’s supposed to be hard tomorrow”—but they don’t have the double meaning this time. Unlike the boy, the girl talks easily, even urgently, telling them how wonderful the son is, how smart and well-behaved. “Wish we could clone that kid,” she says. At this even the husband stirs.

Total interaction time is no more than four minutes before the son comes hurtling into the wife’s arms, but they stretch like time always does on a good-looking day, so that every word tunnels through an ocean of motion and the wife is an oracle, interpreting every infinitesimal sign. Like the way they stand before her, the boy leaning over his toes, the girl firmly planted, heavy bosom unbowed; and the way their eyes cling to something they see as electric, anti-establishment, antithetical to all the other families also gathering under the shelter for protection from the drizzle that has just started to fall.

This is the wife’s perception until they leave the shelter. But walking to the car with the son leaping between them she feels the coldness seeping from the husband’s stillness. It’s like being woken unpleasantly, to suddenly realize he’s been seeing things differently. Following this is a flash of memory so poignant it actually makes her sigh aloud: years ago, had this occurred, they would have driven home in icy silence, drank until it broke, and then engaged in a shouting match followed by regenerative sex that left them stronger than ever.

But with children this kind of remediation is no longer possible. Now his silence is left to grow unbroken; now, as she feeds the children dinner, she sees it as a weakness, as one of an ever-growing pile of parental weaknesses that she must somehow protect the children from. Some nights their refusal to see each other’s point of view extends like a chalk line throughout the house that only the children can cross. This evening however, maybe because the rain has stopped and the sun is still high and the river at the end of the yard is shimmering with a perfectly reflected view, something feels different, more permeable. While the son sings his way through Bob Dylan’s Nashville Skyline the husband sits on the couch drinking a beer. When it’s over he rises and puts on Neil Young’s Decade. At first the wife and son react negatively—it’s a disc he hasn’t played in years—but the husband simply ignores them; soon he’s caught up in one of those full body music immersions that grows so rare with age, and the wife and son can’t help but feel it too. The baby laughs and bobs her knees, sensing the atmosphere has changed. The son takes her hand and begins to dance, and after a moment the wife does too.

Later, moving to the kitchen for a glass of wine, she sees clearly that the husband believes himself betrayed by the way she talked with the counselors, and just as clearly she sees that she’s been falsely accused, because internalizing always distorts. Sensing him follow she whirls and whispers, “It’s not just me—it’s both of us!”

It takes him a moment to understand and then he says, “No, it’s you!” But he touches a lock of her hair with his fingers, gently rearranging it on her shoulders.

“I’m nothing without you. But you don’t see it.” She glares, melting, still fierce.

He frowns. Shakes his head. “They disrespected me.”

“They looked up to you! They’re twenty and we’re almost forty. They hover around us like, ‘Spout truths, please?’ We’re positive role models. Why can’t you see? ”

He shakes his head again but she can tell he has forgiven her because when she turns to pour her wine he steps closer. His hands come around her and rub her low on her belly so that she melts some more, and then they steal down to cup her behind until she tells him to stop because the son will see.

Katherine Forbes Riley is a linguist, writer, wife, and mother. Her creative writing has been published by Akashic Books, McNeese Review, BlazeVOX, Eclectica, Whiskey Island, and Buffalo Almanack, from whom she received the Inkslinger’s Award. She received her BA from Dartmouth College and her doctorate from the University of Pennsylvania, and has published over 40 academic articles in peer-reviewed journals and conference proceedings. 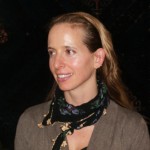