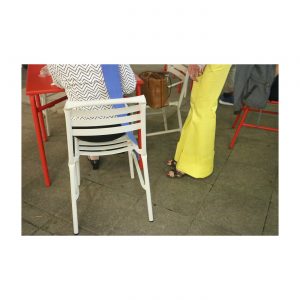 Jaya stared at the drumsticks tumbled in the cracked colander. The tandoori had to be perfect for her glamourous sister. She rubbed at cool chicken skin, washing away the shop-bought plastic smell. Bits of flesh moulded to her, stuck under her fingernails, forced themselves into her lungs. Farha talked about her latest viral article in her echoing voice. Light swelled through the kitchen window and struck her face. She stood, blinking bleary eyes. Mama touched her shoulder and whispered “Papa’s resting his leg. I’ve ironed your uniform, bacha.” Back to work tomorrow. Farha talked on about money, success, choices. All the things she wouldn’t have. Because she’d stayed.

Farha rubbed at the cool skin behind her ear, pressing the pulse that jumped erratically whenever she came home. She adjusted her hearing aid, carried on with her story about libraries, something that Jaya had always loved. Jaya, content in her own head, who gazed out of the window and not at her. Mother breezed in, tenderly stroked her younger sister’s shoulder, shared a secret just for them. Mother wouldn’t touch her clothes, with their “London notions”, father didn’t look her in the eye. Approval, warmth, validation, all the things she couldn’t have because she’d left.

Anita Goveas is British-Asian, based in London, and fueled by strong coffee and paneer jalfrezi. She lurks in libraries and her local independent bookshop, Bookseller Crow. She was first published in the 2016 London Short Story Prize anthology, most recently in former cactus mag, Litro, New Flash Fiction Review and Longleaf Review. She tweets erratically @coffeeandpaneer 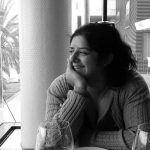