Kill Me I Must Be in Germany
by Kenny Jakubas 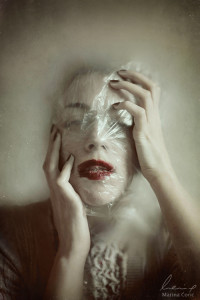 My diary is written on a scroll of sandpaper. Nobody said to hide & in turn-
ed another association. Something tumbles in a dryer in public & we call the numbers.
We call it thunder. We are sitting in a circle exercising honesty & in through walks another friend. She talked about torture because the #35465c blue turf of tumblr tossed it into her dorm like a fax of a drawn representation. It started to get thrown around that here was a tactic that involved the operation of a room in which the floors, ceilings, and walls are coated in sandpaper instead of wallpaper. She told us imagine walls and floors and ceilings in perpetual movement; like a sand-paper treadmill. In fact the room was designed to be one moving sand box, a euphemism that had the room laughing for a minute at the perhaps modest racial undertone that was taken with the comment, as if it alleviated the pain, which it did not. The echo. Our running silence around the room. Our faces around the room. I am an entire red when my eyes decide to gather. The image being bounced in me is of a gerbil running nowhere in some perpetual .GIF. & so but the victim would eventually tire and be sanded to death, is the idea. This is what it is like to share and care like we were taught in the bumblebee era. It is now clear that the cost and effort behind such torture is the most frightening detail that we all have to think through. Surely it is the imaginary construct…

That is so disturbing.
It is the kind of image that is almost impossible to dismiss outright; it must pass through a thin slicer and be processed. The color of my eyes are forgotten but they are considered a gift. This was what she carried to our house: that an idea had actually been thought up and to keep it inside would be worse. To myself I attribute shock to the vehicle of torture, the vehicle of which I had been handling earlier in the day. Someday a connective tissue will exist between us and our laptops. Hopefully it does not eliminate the soft click of the lid closing, the perpetual mobile mouse, the idea of knowing what to search for. Was it the Internet that assaulted my expectations? Yes. There is no expectation, only speculation. In other words I saw this page here and sort of knew what would partially fill it; that that appeared to me was nothing more than a miracle. The miracle knows the difference. The defense is that ok now we know and because it has been weaved for us it deserves condensation, a grit we should know by now as belonging to the rough variety. Because behind me were the eight hours I spent brandishing the sandpaper, ripping strips with my thumbs from a giant—accordingly blood red—colored roll of it & doing so for the sole purposes of removing extra rubber from a thin bond that had occurred between it (the rubber) & an individual piece of brass. On the smooth gray opposite side of the paper is printed, over & over, Made in Germany. I scroll downward into a roll of it. It hurts my thumb a little tearing the strips. I catch myself after ripping them. I catch myself watching them curl into each other. I catch myself knowing that people here take time thinking while tearing sandpaper, that if things are to smooth out they must leave. 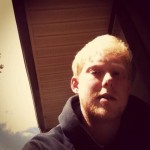