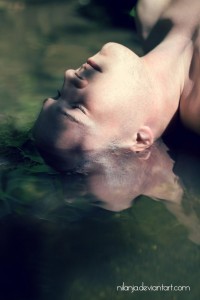 In open-toed wedges, I make my way on cobblestone. I try willing grace into this bloodstream, down into my quads, calves, out to my silvered toenails, but my ankles wobble. I’m a watery-eyed fawn, fixated on this recurring dream where I put a leather vest on Mama and hand her a rebel flag raft. We paddle out to sea, she on her float, me on mine. We get so far the people shoreside turn to clefts in the wide beige, inhales of color in retreat, fuzzy. Mama’s fuzzy, too, a hint of strawberry blonde with a black billow of scrunchy at the nape of her neck.

Everything gurgles the green-brown of the Atlantic.

I reach into my chest, pulling out a child-sized violin. Frantic, I dig for the bow where my heart should be, down into the grape clusters of alveoli inside my lungs. The bow, Mama. Where is the bow? I can’t tell you, lovely. You are so lovely, she says, reaching her pale knockoff hand to my hair, but I’m sick hot in this leather, leather ain’t meant for wave rides. We have to go, you see, you see. A rash climbs across her great expanse of chest, once a swimmer’s chest, and she laughs at her redneck raft and how she resembles a biker. She sheds the vest, pulls a knife from her swimsuit, jabs the middle of a star, says, that’s that, lovely. That’s that. She breaststrokes toward the horizon, says something way out in the distance with her hand in the air, but it comes out haze. I straddle my raft, still rising with little swells. Baby waves push me to shore.

I’m awake in my anxiety now and meeting a man for the first time. Gregory. His name sounds like I should be elegant, like I should know how to do this by my age, like I’d have children half-raised and too smart for their own good with maybe a smidge of sass like me how I used to be long ago, before oceans and violins and the world turned so far inward I no longer knew how to get back to the everyday so I painted my toenails with polish called Rhythm of the Night and I thought of DeBarge and my feet bobbing in the back of Mama’s Honda and her telling me, to behave, please, just this once, let Mama have a night with a nice man, who knows, she says. Who knows what could happen to the beat of the rhythm of the night and she taps her fingers on the steering wheel. When I light my cigarette outside, a surefooted man walks up, asks for a light, says, “I should really quit, we should both quit, it’s killing us, you know.”

“I’m Lindsey, I say. You’re Gregory. You’ve grown a beard and for the life of me I can’t remember your last name.”

He steps toward me, takes the cigarette out of my mouth, and puts his rough fingers on my chin. “Hush…hush, sweet Lindsey, it’ll come to you,” he says, dropping his cigarette and mine. Before long I marry him, but don’t take his name. We laugh like scoundrels at old movie dialogue. He grabs me from behind when I’m working at home, a Bluetooth in my ear, selling ad space to people with big budgets and gold rings, homes on the Outer Banks, while we’re living large in 700 feet square, feeding the neighbor’s cat because Bruce he can’t remember if he did or he didn’t or how to open the door with his fat keys and tiny lock when he comes in at 4am smattered in glitter, smudged head to toe like someone took an eraser to him. We open the door one morning to fill Mouser’s bowl and see Bruce’s Wrangler overturned on the front lawn. He cackles at the wonder of it all, how he got there, and the damned miracle of the gray tabby in my arms, purring.

“Mouser was never that sweet on anyone,” he says before passing out. We watch and smoke on the porch as they cart Bruce away and I say, “but honey, but honey,” and Mouser stretches one paw over another, his back end in my lap, his front end on the man I married and he tells me to hush now, hush; it’s all part of this life, the reckless and tender and the want of it all. We’re all of us lonely, he says. Everybody knows that. But I didn’t know. I didn’t know so much that I spill my drink and it trickles into cracks in cement, flooding the ants, flooding everything in red sugar water. You can’t be married and lonely, I say. It’ll never work, but it does for us. It works for as long as he tells me to hush, girl, hush.

Beth’s debut story collection I AM BARBARELLA is available for order now from Twelve Winters Press. She serves as Editor-in-Chief of Atticus Review. She has been awarded residencies at The Vermont Studio Center and The Cabin at Shotpouch Creek through Oregon State University’s Spring Creek Project for ideas, nature, and the written word. Her work has appeared in Quiddity, Ambit, The Minnesota Review, Superstition Review, and Twisted South, among others. She lives in Charlotte with her husband and enough rescue pets to make life interesting. 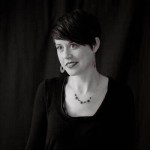