A Word, Please. by Christina Dendy 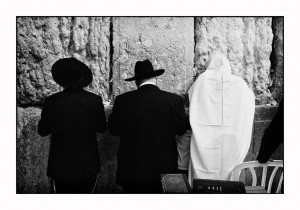 discussing the “final solution” to a question

disguised as a people. They compete to sound,

to make the bigger splash as they plan the best way

to test out and up through extermination.

perched in a café window on our souls while two folk

He’s all wood and paint, chipped thin to crack

as his gears and joints creak beneath their weighty worth.

The daily litany patrols back and forth, casual, absurd,

without notice for the watcher marked for vigil in felt

and papier mache, his only armor a yellow star,

a ghost light that shines brighter than the sun setting

beyond brick glass and wire.

to his playing, I can see him rise, hear him speak

of cold coffee, but it’s just a show. A masquerade

that everyone has been told and should know.

Though they somehow don’t. seem. to.  No, this boy,

this metonymy in spare parts needs others to speak

in order to be heard—and not just for him,

not just for his, because he owns us all. He appears,

like the tree in the forest, to strike a chord, 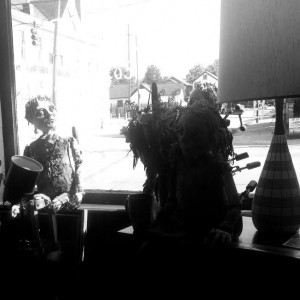 Christina Dendy is a freelance writer and editor who authors K-12 social studies and other educational material as well as poetry, fiction, and general musings. She is also the founding editor (and ne’erdowell) of Mock Turtle Zine in Dayton, Ohio. She lives there with her husband, her two children, and a host of other critters. 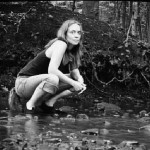 –Photo of Puppets by C Dendy