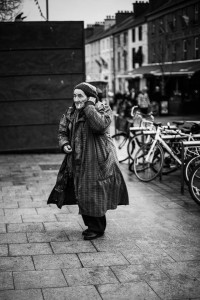 South of Reen Pier, across the harbour from Castletownshend, the Ordinance Survey map shows Reen village and a burial ground.  Neither is readily visible on this stormy morning.  I cycle further on into the wind and my army surplus cape cracks around me like the sails of an old square rigger.  Grass starts to appear in the centre of the road and I am beginning to get worried when I spot a local woman.  Well, local if you live in Frankfurt.  But she had been living here long enough to be quite a historical expert.

“You are already here” she said rather teutonically, as if I had been standing in the middle of Marion Platz asking her where Munich was.

And sure enough, bramble covered ruins dotted the fields all round us, some as low as foundation level and some semi-repaired and being used as farm outbuildings.

“Folks round here say that the first person to die in the great famine came from this very village – but who’s to know eh?”  She was sounding far more West Cork than Westphalia now.  Closer to Baltimore than Berlin.

“And the old burial ground?” I asked.

“That is quite a different story” She said.

But I knew that already.

Castlehaven harbour is tear drop shaped with a bit taken from the bottom that is the entrance.  On the west side the point is known as The Batteries and the eastern side is Reen point.  This is where the burial ground is.

I parked my bike in a tangle of rhododendrons and cross the farm land to a path that leads to the mouth of the harbour.  The storm was driving in from the Atlantic and I leaned into it to protect myself from the whipping rain and the slightly out of control cape.

Nothing of any height grows in this environment so as you reach the brow you can see for miles.  The farm, next to the one I am on, is owned by a reknowned Australian artist who is famous for installation pieces using life size papier mache cows and other animals.  He has dotted the farm with pieces of his work and now in the January storm the life size kangaroo across the field looks quite real.

Further down the cliffs another artist has installed a number of huge pipes vertically on the cliff and now the headland looked like a huge church organ with the wind playing haunting airs.  The morning was taking on quite a surreal air – however none of these object d’art would have been visible to the men whose graves I am visiting.

In the winter of 1601 the Spanish forces under Don Juan Del Aquilla sailed from Spain to Kinsale to join with the Irish forces of O’Neill and O’Donnell with the intention of banishing the British from Ireland for once and for all.  This was no little skirmish on the edge of Europe.  This was full on, heavy weight, eyeball to eyeball stuff with all of Europe on the brink of war.

Most of the Spanish fleet made it to Kinsale but many were wrecked in that December storm.  One of those was wrecked right here on Reen Point.  She would have been smaller than most of the ships with only sixteen men on board, fifteen crew and a Spanish nobleman.  Maybe she was heading for the safety of Castlehaven harbour or maybe she was trying to find protection to the lee of the Galley Head but she floundered on the jagged rocks of Reen point and all hands were lost.

The following day the local people of Reen village retrieved all sixteen bodies and brought them to the church before being buried. Because so few trees survive in this wild landscape it was very difficult for them to gather enough timber to make sixteen coffins so they buried the men in wooden coffins from the waist up and covered in stones from the waist down.

I am standing now where these men are buried.  The sky is grey and the sea is grey and the cliffs are grey. Visibility is poor but I can see across the mouth of the harbour to Horse Island and Flea Sound.  Skiddy Island is beneath me, jagged like a broken tooth.  There is a harsh beauty here in winter but it is lonely and cold and unforgiving.

I scramble around the wet mossy field and I find my first large flat stone, one of sixteen in a row, long covered in grass and earth.  My hands are pink and numb as I pull back the sinewy marram from the tomb.  These young men died for Ireland as surely as any of our Irish heroes. They left behind mothers and wives and children that would never see them again.  And their only brief glimpse of Ireland was in the moments before they died and the only time they visited was to be buried.

The waves are crashing on the rocks below and the wind is whistling and shrieking all around me.  Almost motionless above, is a lone, hardy seagull.  Head down into the wind he stands sentinel.

Across the land there is nothing, no crosses or monuments or plaques in Spanish and Irish.

But there are spirits here and their Spanish fiesta is in full swing – complete with windpipes and cows and life-size kangaroos.

Donal Hayes is a writer from Kinsale in the South of Ireland.  He writes mainly narrative non fiction and is focused on place and journeys.  Currently working on bigger pieces based on a number of long walks. 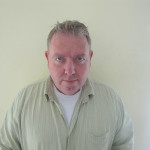