The Vesta Kids
by Mel Healy 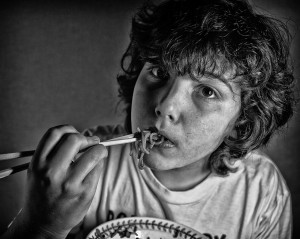 So I’m just about able to do a soufflé. So I can boil an egg. So?

When the younger generation – the ones who don’t know how to boil an egg – come up and ask “Old person, you can cook! Where did you learn to cook like that?” we explain: “Vesta. Everything is down to Vesta.”

When we were growing up our mothers had to go out to work. “To keep yous in the style yez are all accustomed to,” they reminded us. This in turn meant that when your mam returned home from work, took off the shoes and coat and lit a quick fag in her slippers, everything had to be done in a jiffy. Never two jiffies, because jiffies only ever came in ones. A jiffy was a singular unit of food time: the shortest possible preparation time.

Fortunately we also happened to be growing up during the Space Race, what with the Yanks still plonking flags on moons, and still flying across the universe in spaceships made out of Teflon frying pans. Welcome to the hi-tech age of non-stick pots, time-saving gadgets and grub that came in a jiffy.

Popular historians might say that in Ireland time moved very slowly in the Sixties. Not in our house. It was far from a six-hour slow roast mouton in Sean Kinsella’s Mirabeau restaurant that we were reared. In our house everything became fast and instant and came in a jiffy, from Polaroid Cameras to Vesta Chow Mein.

Vesta. Even the name sounded foreign, exotic and out-of-this-world. Vesta was a gorgeous Roman goddess or a strange interplanetary object. Or had something vaguely to do with the vestal virgins from that Procol Harum song. Yes, Vesta was definitely sexy and foreign and quadrupally exotic, because it was magic Space Age food that actually came from outer space.

Everything that the Vesta food boffins’ laboratories came up with involved cool shiny packets. It was exactly like the grub that the Apollo astronauts would have for a TV dinner before going out to plant a few more flags and do a round of golf on the Moon.

Vesta was just like an astronaut’s dinner, only without the straws of course. Just add water, heat it up, stir for a minute and… hey presto! Instant feast, done in a jiffy!

Vesta was a sort of high-speed culinary tourism, way faster than Ryanair. From cupboard to plate, everything was IN JUST 20 MINUTES! And where was Vesta flying us off to this week (IN JUST 20 MINUTES)?

In JUST 20 MINUTES Vesta would magically transport us to these faraway places, just as the pictures explained on the front of the packet of:

…..1. Vesta Beef Curry (bland mush but the kid brother loved it)
…..2. Vesta Hungarian Goulash (vile disgusting muck which we all hated so we only did it once while on the caravan holiday to the Beara Peninsula and got a severe does of the runs afterwards)
…..3. Vesta Chow Mein (who needs a chemistry set for Christmas when the Reid household has Vesta Chow Mein?) or
…..4. Vesta Paella (a sheer culinary masterpiece, Eat your heart out Delia, and Biddy White Lennon!)

Vesta was only the start of it. The food discoveries came thick and fast. You could never second-guess what marvellous miracle of molecular gastronomy had just been brewed up by those men in white coats in the research centres of Erin, Knorr, Cadbury’s Smash or Bird’s Angel. You never knew what amazing new chemical breakthrough your mother might discover in the supermarket aisles and decide – in an instant of course – to “give it a whirl”.

Whirl being the operative word. Because these boffins had recently invented something called emulsifiers. So now your da could do the living room with a paint that never dripped, and your ma could produce a Butterscotch Angel Delight that, come to think of it, wouldn’t drip either. In fact, just about every known substance under the sun could now be emulsified, dehydrated or freeze dried. These included Nescafé, Marvel (dried milk), Coffeemate (tasted like emulsified paint), minestrone soup (ditto), Green’s Crème Caramel, sponge mix, “parsley”, stuffing, gravy (a delicate jus called Bisto), mashed potato (scientific proof of other life forms in our galaxy), peas, carrots (“diced”), broad beans and the hideous marrowfat pea – a dried “instant” thing that actually needed to be soaked overnight with a huge white pill that looked like your gran’s Steradent tablet, which dissolved the marrowfat or something.

These were the very same dried, semi-instant, space-age luxuries that astronaut Neil Armstrong would die for. There they would float, those astronauts sitting in their tin can, and Neil would say “Hey lads, what’s for dinner tonight?” And Buzz or Mike or Chuck or whoever would say “How about a Chinese?”

The Chow Mein box had a handy map of China in the corner, and wiggly Chinese writing, so you’d be getting a quick lesson in geography and typography too. Each Vesta Chow Mein box contained four further packets.

Packet #1 was labelled Beef Granules. Add water, apply heat, and through the Eighth Law of Thermodynamics the grains would transmogrify into something that wasn’t anything remotely like beef – or granules either. The stuff was grey and tasted like the cardboard box it came in, yet nonetheless an essential component of the overall dish.

Packet #2 was labelled Soft Noodles. These went into boiling water to become a tangled mass of squiggly white noodle-worms.

Packet #3 was Crispy Noodles. Straight, semi-transparent strips that went straight into the deep fat fryer, only to burst, explode and curl up into huge crispy brown things, like crunchy bacon rinds or your granny’s toenails.

Finally Packet #4, a tiny sachet of soy sauce or caramel or engine grease for all eight of you to squabble over.

Best of all was Vesta Paella. Fasten your seatbelts and pass the flamenco guitars and the castanets, because the Reid house is in Barcelona already. Unlike most of Vesta’s other concoctions, the end result was actually almost edible. Real prawns (OK, little did we know), real tubby grains of rice and a real scrummy smell.

Vesta Paella would always prompt a heated debate in our kitchen about international culinary techniques and standards.

Somehow the thing on your plate even managed to look remotely like the picture on the front of the box.

So that was us: the Vesta kids. After all that, God knows how we managed to learn how to cook anything that didn’t come in shiny packets from outer space. It was far from soufflés we was reared.

Irish writer Mel Healy is based in Stoneybatter, one of the oldest areas of Dublin, Ireland. His Moss Reid mystery series is about a PI whose priorities in life are to “eat, drink and investigate – in that order”. For more information visit melhealy.wordpress.com 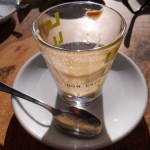