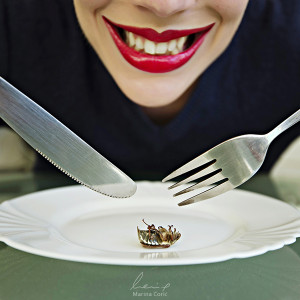 It was a major problem.

There’s a hell of a lot of paperwork if a patient is eaten.

The problem was my partner was huge.  According to BMI calculation, he was a “super-super obese” Hispanic-Caucasian man named Jessica.  Primarily Caucasian, but he insisted he was Latino even though his Spanish was at second-grade level.

Jessica wasn’t his real name, but he was an “A Boy Named Sue” fanatic and liked to try to egg people into fights, insisting we call him Jessica and looking for any sense that we had a problem with that.

He called his ethnic mix being “His-Cauc.”

He said he was an ex-lawyer.  A lie.  But, in truth, he did have a background in the court system so he knew all of the ins and outs to do something like that legally.  And you can eat people if you know the proper loopholes.

He ate infants, the elderly, corpses, and he had a penchant for young women.  He’d make sexist jokes and if they didn’t laugh, he’d gobble them like a giant in one of those old stories with giants.

In a matter of seconds, I saw him devour a seven-year-old with a severe femoral break.  He said he did it to stop the pain.  We had run out of painkillers in the ambulance and he said there was no better analgesic than being swallowed alive.

My counterargument was that some people wanted to live, that he shouldn’t be making that decision for them.  Paramedics’ jobs are to always try to save patients, never to take their lives.

But he said that we take them in the back of the ambulance, we take their clothes off and strip them down until they’re trauma naked, we take a huge friggin’ needle and insert it into their arm or leg or buttock or wherever it needs to go, we take our time if a patient has bad decubitus ulcers and there are pot-holes, so with all of this taking we should be able to take their lives as well.

So what I did was report him to H.R.

And H.R. said that people are getting eaten everywhere nowadays.  H.R. said that she saw a person get eaten alive last Wednesday at the bank.  She said that if I had a problem with cannibalism, then I needed to come to terms with the fact that it was 2014 and also that I needed to realize that Jessica had seen a baby die a few weeks ago, so he was dealing with that and I should just let it go.

She asked me if I’d heard of the Tao.

She asked me if I could explain it to her, because her husband had and she didn’t understand it at all.

I left the office.

Jessica was outside, picking his teeth, listening to every word.

We got our next call.

On the drive, I could tell Jessica was looking at me peripherally.  And he seemed famished.  He seemed like he’d just come off a hunger strike.  That he’d just finished fasting for blood work.  Ramadan had just ended.  Holy Week.  The final moments of a starvation diet.

I had a pen on me.  We always had pens.  Multiple.  In each pocket.  Medicine, in 2014, is all about forms.  It’s not so much treatment as it is documenting treatment.  The patient can die, as long as you write it down.  If a patient dies and you forget to write that information on a piece of paper and sign it, then you can go to jail.  But if you drop a patient off of a cliff and it’s written in very legible handwriting with properly crossed t’s and an impressive usage of medical terminology, you’re Scott-free.  Or Scotch-free.  Whatever that term is.

By the way, I always recommend using the word “supine” at least five times in any PCR.

PCR stands for Piece of Crap that you wRite up.

Anyway, I have pens.  There are needles in back.  The blood pressure cuff can be used for strangulation.

Ambulances are filled with weaponry.

If a zombie apocalypse ever comes, I’d rather have access to an ambulance than an armory.

We arrive on scene.

It’s a kid.  Maybe fifteen.  Skateboard there.  No helmet.  His friend with a camera.  He’s shooting the kid on the ground.  Not helping him.  Not assisting.  Not consoling.  Just filming.  This is 2014.  We don’t rush to people’s aid anymore.  We rush to a spot where you can get good footage.  Technology breeds cowards.

We C-spine the patient.  It looks official, the grand, choking turtleneck of a device that studies have proven does absolutely nothing.  It’s all for show for the general population.

I could run down a long list of things that we do for show for civilians, procedures we do on patients that have absolutely no meaning whatsoever other than lawyers have proven that lawsuits increase if we don’t do them, decrease when we do.

Too much to write here.

To “boil water” in the medical field means to do nothing, but to do it with much energy.  It comes from when we used to tell husbands to boil water when the wife was getting close to delivering a baby.  We don’t use the water for anything, but it gets the husband out of the room.  And it sounds official.  It makes you think of sterility.  Although the only thing getting sterile is a pan in a room that we’re not currently in.

If I drive I know we’re going to pull up to the hospital and Jessica is going to be picking his teeth with clavicle shards.

I insist he drives.

He says all right, fine.

I get in back.

And I realize that we’re not heading to the hospital.

We’re going north.  To the land of Vikings.  Where he lives.  A collective communal farm of super-obese medics who I know have all got patient feeding frenzy reputations.  All combination paramedics/paralegals.

I whisper to the patient what’s going on.  He nods.  With the C-spine around his neck.  Not easy to do.  But his eyes are saucered, realizing that once you step into an ambulance you’ve just taken one large leap closer to Death and the only way to get through is by fighting.  He whispers back if we should jump.

But I tell him no, not yet.

I have a lighter in my pocket.  There are sterile cleansing wipes everywhere.  Thick alcohol solutions.  There’s an oxygen tank nearby.  Those are like plutonic bombs.  People don’t understand the threat of an oxygen tank.  We walk in and see 90-year-old COPD patients smoking next to them in their living rooms and we have to give lectures on thermodynamics, on how cigarette + oxygen = boom.  The next time we go to their house, they’re still smoking again.  Older patients don’t care if their behavior may kill themselves, along with their next-door neighbors.

I tell the kid he’s going to have to run when I say run.

We get into the compound.

All white uniforms milling about.  Weight benches like cars up on their blocks.  Pink Floyd cranked on invisible speakers.  I’ve found that Satanists for some reason love Pink Floyd.  When we get to the heart, to the tricuspid valve of the place, its epicenter, I light up a series of swabs.  I throw them on our paperwork.  I crank the oxygen tank.  And we kick the doors open and run.  Straight for swamp.  Diving in deep.  Until the explosion behind us fingers sky; it turns the farm into a bad thing; it sidewalks the cornfield.  The meadow aflame.

Bones of grandmothers with colon cancer.  Bones of children with cystic fibrosis.

It’s every patient whose ever been eaten by the medical system all lying out, turned into white picket fences and trinkets for dream-catchers.

I hear them tinkling in the trees nearby.

I feel them underneath my feet.

The farm burns, the flames going straight up to the blackboard sky.

We stop, drop, and listen.

From the farm, out steps Jessica fully aflame.  He yells at us, calling me a “Pinhead-o.”  He yells at us that he could have dated Sheryl Crow if he wanted to, that he only had a brief streak of pedophilia, that he was a famous paramedic instructor in several southern states, and then the flames fully eat him.

The moon emerges from behind a cloud, the cloud in the shape of a gray pancreas.

And we walk home.

The feel like, perhaps at least for a few years, no patient with stomach cancer will arrive to the hospital inside of a stomach.

The feel that the incredible ifs of the future are all good, all have the potential you feel when you see the construction of a glorious bridge.

I put my arm around his shoulder and he yells out in pain.

Ron Riekki’s books include U.P. and The Way North: Collected Upper Peninsula New Works (a Foreword Book of the Year Award finalist and chosen by the Library of Michigan as a 2014 Michigan Notable Book, http://wsupress.wayne.edu/books/detail/way-north). 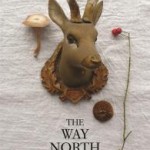