A woman holds her breath

But life pushes her ahead where

The roads are endless and

Faces blur in a flash of traffic lights

She moves on red

We always end up here

Floundering in the overgrown weeds

Below the Ferris wheel

JOSEPH M. FARIA—first book of short stories FROM A DISTANCE was published in June 1998.  He has also published a collection of poems THE WAY HOME, and a children’s book THE POLAR BEAR WITH WISKERS. His poems or stories have appeared in NEO, The Rhode Islander, Snowmonkey, Temenos, Riven,  Zoetrope All:Story Extra, and a Glimmer Train Finalist for 2001 and 2004. He has another collection of stories to be published in October of 2014.

He lives in Cranston, RI with his wife Sandra, and their dog “Josie”. 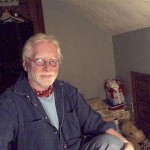