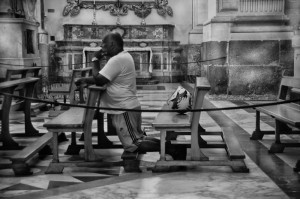 I would have told you

in my father’s house there are many

mansions. I remember the passion

during rain, before/after, over

hill and dale and lake,

Let me start again. I ran

that sentence into the ground so

and never be afraid

to go out on a limb—

my mother’s words, my father’s—

Man’s sins, there are many, many …

a paper flower dropped in a cup of water 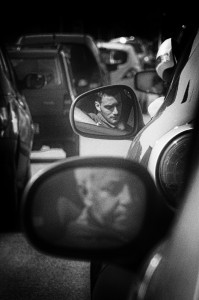 Halfway through the matinee, I

wake up watching a film to find myself

in the lead role. My eyes adjust from dark

to day, outside in the dim light on the street

where everyone is saying the same thing

differently. Between folds of paper and body sweat

and smoke from rubber or cigarettes, billboards

with all the ads defaced, hurried footsteps,

the glaze of morning, it occurs to me:

The whole world is a vast film set

in which props are continually shifting,

and people you’ve never seen before

playing your most beloved ones. Things no longer

run on lithium, only time. The roving camera

is a mirror where the lens’s gaze belongs

to the audience, or else a recurring memory,

propped on stilts and a rotating series of images

in which stutters may result in earthquakes. Narration dissolves

into a guided tour with no boundaries and hardly any pauses

and ideas burst to the foreground with all the fanfare

of a very impressive PowerPoint presentation:

A word, a laugh, a look, some slight distress,

a passing thought or fear forgotten since childhood

like the ghosts that endure in homes, the dust

clinging to furniture throughout generations,

the memories that live on as ghosts,

the people and places you used to know, whispers or misheard

but rather limitless. No end or absence

of surveillance in which someone, somewhere

is changing the frames, retaining an illusion

of motion for a single, vertiginous moment.

I lost you repeating

Inward on a track

In the fountain of a park

We pass every day

Say a few words something

As a swimming pool in June

Coffee in the cold

Picture in a magazine

Chris Campanioni seeks to blur boundaries. He has worked as a journalist, model, and actor, and he currently teaches literature and creative writing at the City University of New York. He was awarded the Academy of American Poets Prize at Lincoln Center in 2013, and his novel,  Going Down, was selected as Best Debut Novel for the 2014 International Latino Book Awards. Find him in space here: www.chriscampanioni.com 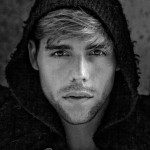