Such Alien Shapes Among Us by Gene Albamonte 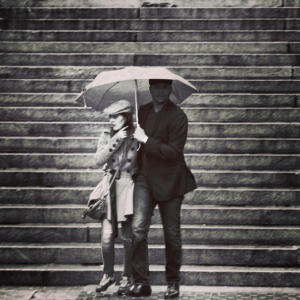 She had seen many shapes back at the quarry, but the one stuck in her head now was the crustacean Waptia fieldensis, which was shaped like the tiniest of cellos. It was the shape she saw when the pain hit her, at first dull and then acute, at first in her abdomen and then spiderwebbing through the rest of her body. She was three weeks pregnant, but they hadn’t told anyone yet, so she and James had made up an excuse, said their quick goodbyes to the team and then left.

They crossed the palm of the Canadian Rockies. Her walking stick stabbed the trail with each step as they climbed past the moraine, abandoned rubble at their feet, her mind holding on tight to Waptia fieldensis, something to keep her from falling too deeply into the pain. The world was all sweeping brown and sharp earth. Swaths of conifers, like a billowing green quilt. An elk hulked its way across a far-off stretch, a winter-tree of antlers rising out of it into ten points. Off in the distance, four figures approached. There were two young women and a young man, as well as an older man who looked to be in his late sixties, his thin brown hair going grey, a stubbly beard. They walked abreast of each other, all wearing nearly the same outfit: flannel shirt; baggy, sky-blue jeans; white walking shoes.

The older man greeted James and her. She remained quiet, too immersed in the oddness of this group: their similar attire, matching smiling faces, the way they approached shoulder to shoulder. In her mind, she made them even more bizarre, a new species that had four bodies barely connected by thin filament. Which made her think of Opabinia regalis, with its five eyes at the top of its head and its tassle of a probiscus and its sleek, slender body. A shape so strange, it had been laughed at the first time it was ever shown to others.

The Four Oddities—as she came to call them in her head—introduced themselves, but their names were immediately lost on her. Later, she would try to remember the names and fail. She could remember names of endless trilobites, but what to call people was gone in seconds.

They talked for a bit. The older man said they had been playing a game, where they each had to reveal something the others hadn’t known about him- or herself. Two of the young people with him were his children, who admitted the game was a little embarrassing. “There’s a reason why you don’t know these things about us, Dad,” said one of the women.

Julia tugged on James’s shirt, discreetly. The pain had stopped for a moment, but she was getting tired and wanted to rest. They said their goodbyes, and the Four Oddities walked past them in the direction of the quarry and disappeared down the trail.

When she learned a shape was forming inside of her, cell-by-cell, she folded in on herself, could feel the tiers of her body bending and layering on top of each other, like a game-board being put back into its box. She didn’t want the baby for all the reasons one might have heard before: she wasn’t ready yet, she wasn’t fit to be a mother, and then, most of all, there was her work: what would become of that? “You could come back to work,” James had said when she told him. “Take some time off and then come back.” “And what about you?” she asked, to which he left so much silence before his response that he needn’t respond at all. She could see it: Earth rising up into a coliseum of hammered peaks. Talus-ridden hillocks. Tufts of bunchgrass, slopes carved with long cracks like veins. Sky, candleflame blue. And him among it all, without her, seeing everything that once was.

Two weeks before leaving for Canada, while her husband was working, she stood in the bathroom and aimed her fist at her stomach as if to punch the unborn child as hard as she could, as many times as it would take. That night, while lying in bed, she reached and found James’s belt on the floor and she held it with both hands. She imagined wrapping it around her sleeping husband’s neck. She imagined pulling as hard as she could. There were other, easier ways, too. Kitchen knives. Gasoline in the garage, a lighted match.

She would do nothing of the kind, of course. She hated herself for having those thoughts. She dug her fingernails into the palms of her hands, leaving half-moon impressions, fossils of how she felt.

She saw herself sitting on the couch, alone. The front door opening. Saw herself saying to him, “Tell me what you saw.”

At Yoho Lake, she needed to stop and rest. The pain was returning. She wanted to get back to camp, to get on a plane, to get home, but her body resisted. She had been told to listen to her body—by her mother, her doctor, her friends who had already wrangled offspring into the world. So she listened. She sat down near a tall pine tree and closed her eyes and fell deep into herself, until there was nothing but the sound of wind bullying leaves and the lakewater lapping. Much later, after they returned home, she would think of this moment, how she had listened to her body, how she did what she was supposed to do.

When the pain subsided, they got back onto the trail, passing streams that washed limestone, the sunlight splitting clouds in half, carving shadows out of rocks and trees. As they approached the camp, her heart grew lighter. They walked into the cabin and there were their bedsheets twisted into a cone, the suitcases open, clothes spilling over the edges. There was the mixed scent of wax and lavender from the burnt-out candle on the cabin’s credenza, the pale olive-green walls and framed black-and-white winter shot of Mt. Wapta rising out of the Canadian Rockies like a tooth.

Three months after returning from the Shale, she lost the baby. Her doctor assured her that it had nothing to do with the pains she had felt on their expedition. A month after she lost it, she and James had decided to take a road trip to Savannah. A trip that would be short and pointless, was how James put it. She said pointless was good. She could use some pointlessness in her life.

They took an exit to eat at a rest stop. A family of four walked along the sidewalk, and James said they reminded him of the people they had met on the trail. The Four Oddities, Julia had called them. This made him think of the night right before the expedition, he said. How they had lay in bed under the photo of Mt. Wapta. How they played the Shape Game and he guessed correctly when she described Hallucigenia, an ancestor of the Velvet Worm and, therefore, an ancestor of humans. And how he had said, placing his hand on her stomach, that their child came from Hallucigenia.

Now, at the rest stop, he told her he wished he could describe the shape of their child. In her head, she corrected him: would-be child.

“I keep having this dream,” he confessed. He stared out the windshield. She tried to follow his gaze, but it didn’t seem to land anywhere. He was looking in the direction of the highway they had just exited, but, really, he was looking well past the highway, she could tell. She imagined the gaze going past the horizon that seemed to pull the road along like a thread, past the towns and cities spilling out beyond, the gaze aiming all around the globe, until it reached just behind the both of them, as if he wanted to see what they looked like to an approaching stranger: a man and woman sitting in a car, neither of whom was saying a word, one of them looking at the other, waiting.

“We’re at the hospital,” James said. “You just had the fetus removed. But in this dream, we tell the nurse yes, we’d like to see the fetus. Not keep it, but just see it. Do you remember her asking that, if we’d like to keep it?”

She did. The nurse had asked if she and James would like to take the fetus home after removal. The nurse said that some people liked to bury the fetus, for closure. Julia had shook her head. They told the nurse no.

“In my dream,” James continued, “we tell her yes, and the nurse disappears. When she returns, she has something in her arms, but I can never quite make it out—it’s just a fuzzy blackness, a void, and then I wake up.”

He said he dreamed this at least once every two weeks.

Julia fidgeted with the glove compartment. It unhinged like a broken jaw. She jockeyed it back shut, then ran her hand along the base of the upholstery, felt the small scab of dried-up cola on the seat. She considered telling him how, when he had been in the cafeteria to get a bite to eat, she called the nurse back. How she had asked to see the fetus. How she recorded in her head what she saw: Tiny. Three or four inches maybe. Skin translucent. Ears not in the right spot, too low. Eyes sealed shut like a seam.

But she told him nothing. She placed her hand on his knee. She held the shape within her, as if her body itself were a shale, and looked out the car window. The tall grass of the median trembled in the slight breeze, the day’s heat bending the horizon.

Gene Albamonte graduated with an MFA in Creative Writing from the University of Central Florida. His fiction has appeared in CutBank, LIT Magazine, The Rattling Wall, Southern Indiana Review, decomP, and other publications. 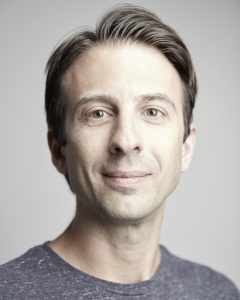