The Space Between Goes For Miles by Angel Luis Colón 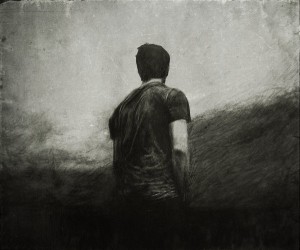 That little gap right between my finger and the trigger of this gun—where the cold air from the December evening flows freely—it holds the multitudes. It is legion.

It holds angry tirades, demands, fears. The heated words of lovers scorned or the pleas of the guilty and the innocent, and the last gasps of those who never expected lead and steel to be the instigators of their end.

That space, that gap, it fits novels’ worth of words—bibles. It fits the sound of my helpless, miserable sobs at night as I heard her screams, the prayers that poured from my lips like sacramental oil and onto the dirty shag carpet of our one bedroom apartment—laser-focused to save her from the pain, but ultimately a useless child. Back then, you were never close enough and I was never big enough—man enough.

Now, it’s different. Now, I’m micrometers away from deliverance. Just like you are. The gap holds your explanations and rationales. The excuses, the accusations, the punches and kicks. It holds that flash-frame moment when they lowered her in a pine box into the cold, cold earth. It holds the silence I could feel in my bones once everyone was gone. It holds the view of the Throggs Neck Bridge and the traffic that kept moving—the proof that she was gone and the world kept going.

It holds the weight of my burden and the bulk of my love, this gap, and as I close the space between, as my finger feels cold metal instead of the chilling wind. As that jolt runs from hand to shoulder to back to chest; all of what fit into that gap erupts—concentrated, no, consecrated in fire. It wipes the slate clean. It baptizes you in the stench of your blood and your yellow-bellied fear.

The space returns and nothing fills it. There’s no relief, no happiness, no closure. There’s nothing there to tell me this is all done. All that’s there is the traffic flowing on the bridge, the wind in the trees, the soft patter of rain against the stone slab that marks the place where she rotted away. Maybe she’s a part of the softening earth. Her hair in the browned stalks of grass, her smile in the pebbles poking up from the ground.

Or maybe she isn’t there at all.

So I watch the traffic. I place the steel against my aching temple, more in thought than ever in my life, and I close the gap for the last time.

Angel Luis Colón is the author of the novella, ‘The Fury of Blacky Jaguar’. His Derringer Award-nominated short fiction has appeared in multiple anthologies and websites. His non-fiction has appeared at My Bookish Ways, The Life Sentence, and the LA Review of Books. He’s also an editor at Shotgun Honey, a flash fiction website. Keep up with him on Twitter via @GoshDarnMyLife 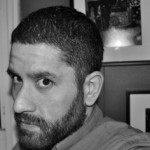