One night in bed Thomas confessed to his girlfriend Sophia that he sometimes hoped for his most demanding or truculent patients to die. “I could even do it myself. It wouldn’t be hard to get away with.”

Sophia propped herself on her elbow to look at his face, the ends of her light hair mingling with the much darker curls on his chest. “You have the mind of a murderer.” She said this like she was telling him he had something in his teeth. “But you’re a surgeon. People are strange.”

Thomas fondled her happily. “I don’t actually want to kill my patients. I just want them to—disappear.” And he flashed his hands like a magician proving they were empty.

Sophia was away for a week visiting her sister and newborn nephew. When she had kissed Thomas goodbye, she told him she would miss him.

“Me too,” he replied reflexively.

But that evening, while walking home from the hospital, Thomas asked himself: do I miss her? Do I actually, truly, genuinely miss her?

There are several definitions of the verb “to miss.” The most relevant here seems to be “to feel the absence of”—but is it the most accurate? If Sophia went out for a bottle of wine while Thomas stayed in his apartment, he felt her absence. He felt it even more than he did now, actually, when she was across the country. But does that mean he missed her while she was buying the wine?

On the second day of their separation, Thomas answered Sophia’s phone call while reading a surgical journal.

Thomas, still trying to follow the article, flustered, having little to say except answers to concrete questions. Why must they “stay in touch” while she was away? What did she gain from this phone conversation? And by the end of the call, Thomas realized something. If Sophia could not be here, in the flesh, then he wanted her away, completely, existing not as a real person in a distant location, but merely as a spirit, an idea he called Sophiageist.

It was his fourth day alone. Thomas had worked the night shift at the hospital and was leaving at the same time as one of the nurses: voluptuous, curly-haired Alana. He had often watched her tend halfheartedly to patients, with one more button of her white uniform undone than was standard.

During hospital hours, Thomas addressed her, like all the others, only as “Nurse,” and it startled her to hear him say her name.

“Not at all.” Thomas fastened the top button of his overcoat. “I’m in no hurry.”

The other dictionary entries for “to miss” are: “to fail to obtain,” “to fail to perform or attend,” and “to fail to understand.” Those definitions might be more accurate for Thomas than “to feel the absence of.” We might even say that Thomas missed the feeling of missing someone more than he ever actually missed anyone. He did love Sophia, but he also loved autonomy and solitude too much to ever forget, completely, that she was a compromise. And it is very difficult for someone with the mind of a murderer to pine and long for a compromise.

On their first date Thomas had accompanied Sophia to a film, although he rarely went to theaters because he disliked being near the other audience members. He was embarrassed by her reactions to the love story: while Thomas sat silent as a stone, Sophia gasped and groaned. “Oh no,” she murmured, when the heroine missed the last train to her lover’s Italian villa.

In the lobby after the film ended, Thomas looked over and noticed that Sophia’s cheeks were damp with tears. In the theater, her reactions had seemed juvenile, silly, but now he was intrigued, even touched by her emotion.

“You would make an excellent nurse,” he said in an uncharacteristically reverent tone. Presently she was scraping by as a nanny and unlicensed masseuse. “Have you ever thought of it?”

Sophia nodded, her bright blue eyes darting around in staccato fashion, looking at everything except him, as she always did when answering a direct question. “I have, a little. But I don’t want to take orders from doctors.”

They had finished their second glass of wine. Thomas was sitting on a rickety chair, controlling the conversation with long pauses and short answers. Alana was seated on the edge of her narrow bed, her thick leg bouncing under her nurse’s skirt. When she sipped her wine, she peered at him over the rim of the glass as though she were in the operating room, awaiting an order.

As Thomas and Alana had walked to her apartment, he noted an advertisement for an upcoming art show. Despite her tears during maudlin movies, Sophia was a severe critic of paintings, perhaps because her father was an unsuccessful, impoverished painter. Last month Thomas and Sophia had wandered through an exhibit of student artworks, most of which he found passable, even appealing. Sophia had called them “shallow puddles of classroom vomit.”

Remembering the comment, Thomas smiled— but the more he tried to dispense with these intrusions, the more Sophia poked at his mind. So in a flash of surgical inspiration, he changed tactics, deftly transplanting Sophiageist into the nurse’s body. And the operation was a success. It not only eased his own mind, but Alana seemed to relax, too, reclining back on her elbow.

“It’s getting late,” Thomas said, setting down his glass. He joined her on the bed, kissing her neck as he unzipped her uniform. Alana resisted playfully, for a second or two, before yielding completely.

It was no better than it was with Sophia, not even as good, actually—with Alana there was lust, but not sensuality. But it still excited Thomas to be privy to the nurse’s sexuality: the sweatiness of the back of her neck, her biting of his lower lip, her hotly whispered “Do whatever you want with me.”

He looked at her coldly. “I have to be at the hospital early.” He reminded Alana that it was in her interest, too, to be discreet about this night.

Thomas walked home and prepared for bed, listening to the phone message Sophia had left an hour ago. “I miss you, darling, and can’t wait to see you.” He looked at the empty space next to him. Three more days and she would be here again, tangled in his limbs, rumpling his sheets, warming the mattress. Sophia—he tried to miss her, he tried to feel her absence—he tried, he tried, then he closed his eyes for sleep.

Elias Keller is a Philadelphia native and studied anthropology at the University of Pennsylvania. His fiction has appeared in Every Day Fiction, APIARY, Slush Pile, Forge, Pindeldyboz, The Legendary, and elsewhere. He currently lives in New Orleans. www.eliaskeller.com. 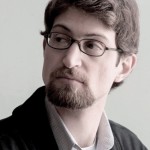