“Sometimes I feel like a motherless child, and sometimes I don’t” by DeVan Burton 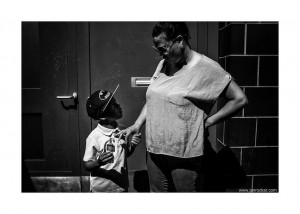 The people we form relationships with speak volumes about who we are; so do the relationships we continue to advance in spite of their pitfalls and their potential to cause irreversible harm and sorrow. Those we choose to establish and maintain a connection with matter. We reflect the individuals who are present in our lives. I am fully aware that the relationship that has shaped my identity more than any other relationship is the one that I had with my mother.

I wasn’t answering my phone the night that my mother died. It was the Friday after Thanksgiving in 2012 and I had other obligations: revising semester research papers for the graduate school seminar classes I was enrolled in and searching retail department store websites for the best deal on the presents my children wanted for Christmas. Each time the Oklahoma area code of 405 appeared on my phone’s screen I simply let it ring.

After an hour passed, the 405 area code reappeared. I answered the call this time and heard a voice that was not my mother’s. The voice was deeper, stronger, and was marked with a quiet anxiety. The voice calling from Oklahoma belonged to my mother’s friend. She called to tell me that my mother’s body was found lifeless in her bedroom. My mother was only 53 and I was instantly overcome with questions and emotions that assaulted and challenged my sense of identity.

And so began the exploration into my identity.

Like my mother’s ability to thrive in the throes of indecisions, I could not answer the questioned poised to me. I asked for a day to decide. I left my apartment on campus, walked to the nearby soccer field, and like my forefathers and foremothers, I looked to the sky for direction, answers, and a miracle. The sky was empty that night.

My mother’s existence, which was comprised of arbitrary acts and consequence-be-damned living, could not be my existence. “I am a parent,” I thought, “and I want to provide my children with a life that possesses some sense of order and stability. I want to establish a relationship with them that is based on trust and commitment.” There were strong, thoughtful, and legitimate reasons for not going to Oklahoma. But I was still my mother’s son. I disregarded good logic and sound thinking. I left for Oklahoma City on a Sunday morning.

In dying, my mother had accomplished a rare feat: she had made me a two-time orphan. In the summer of 1987, my mother made a series of poor choices, decided to start over without me, and drove away while I chased her car like an obedient pet.

During the twenty hour, 950 mile drive to Oklahoma, I had time to think. I had time to plan what I wanted to say to my mother. But I forgot all of it when I saw her lying there. I did not recognize her corpse. Her friends, whom I’d never met, recognized her, but I did not. I wish I could remember what I said to her before I left the room she laid in. I wish I could remember the highlights. I do remember the emotional poignancy of the moment. In her passing, she was leaving me behind again.

The anger that I possessed for years left me. For the first time in my life I was able to articulate loss. I was familiar with the concept before my mother’s death, but trying to explain loss was a tiring, frustrating, and painful ordeal. As my mother lay before me, becoming colder and colder as the seconds passed, I saw what loss was and what it does to a person. In my mother’s death, I no longer had the ability to communicate with her; to tell her a joke or argue about who would pay for our meal at a diner. The abstract concept of loss materialized into a moment when a son could not talk to his mother and expect a response anymore.

During the rest of my time in Oklahoma City, I spent every waking hour in my mother’s apartment. I cleared, cleaned, and removed as much evidence of my mother’s existence as I could. I carried her mattress from her bedroom to the dumpster outside. I dealt with the friends who felt entitled to her belongings. I struggled with searching her purse for information. If my mother were still alive, she would have scolded me for going through a woman’s purse. Then again, if my mother were still alive, I probably wouldn’t be in Oklahoma at all.

On the last night, my mother’s friends and I held a memorial for her. When it was over, I went back to her apartment. I gripped the key to her front door in my hand as I walked around the home she made for herself after she left me. As I stood there, where she once had, I felt a new emotional bond with her; a new sense of admiration and pride flourished. When she left me, she moved to a land where she knew no one and made friends. She made people’s lives better. I took one last look around the living room where she watched movies. I sat in a chair in the kitchen where she cooked countless Sunday afternoon meals for her neighbors. I stood on the porch where she had stood and watched the lives of the people in her community unfold daily. I stood in my mother’s home in Oklahoma. But my home was in Tennessee with my children.

I left the next morning with a few of my mother’s possessions: a small journal she wrote in, a used record player, and her music collection. When I told my mother’s friend, the woman who called me, that I was taking all of the music that my mother had owned she told me she understood why. She understood how awkward and painful it was for me that people who I had never met knew my mother better than I did. My mother’s friend told me that if I listened to my mother’s music, maybe I could understand her better. If I could possess a clearer picture of who my mother was, maybe I could better understand who I am, too.

Whenever I want to feel close to my mother, I listen to her music. I pick a CD at random, place it in the CD player, and press play. I place a record on the turntable, lift the arm, and lower the needle on the vinyl surface. I like to think that I can see her dancing to an upbeat tempo or drinking tea and pondering about the one that got away while listening to a love song. My mother is with me in every track, every scratch, and in every liner note. Some children inherit money, land, or a business when a parent dies; my inheritance is the freedom to form my identity, to accept and move on from the past, and to tell my mother’s story. Sometimes, I feel like a motherless child, and sometimes I don’t. I am okay with that.

DeVan Burton is from Knoxville, Tennessee. Mr. Burton is currently finishing work on a Master of Arts in Literature degree at East Tennessee State University. Besides The Foundlings, Mr. Burton’s other published works can be found in The Southern Poetry Anthology, at online literary journals Forth Magazine, and in the upcoming December edition of HashtheMag. Mr. Burton can be followed on Twitter @sirwriteright and on Instagram @dbwriting. 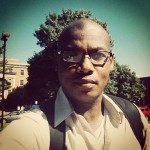