Some Sobering Serendipity at Squib’s
by Samuel Vargo 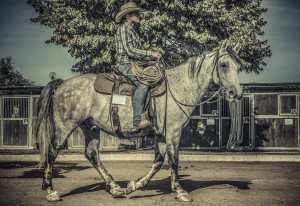 So me and Weasel were down at Squib’s the other day and this seven-foot-tall, skinny-as-a-toothpick guy saunters in – he was wearing a wide-brimmed cowboy hat, almost big enough to be a sombrero; and as he walked up to the bar, I tried to avoid eye contact with him. I couldn’t tell if he was white, black, Hispanic, or Indian – but his mere size made me sort of drunken itchy. I can’t say if he was actually seven-foot, but he might as well have been . . . .

“Get me a Rolling Rock and a shot – Jack Daniels,” the guy said to Randy, some longhair who’d been our side of town’s drifter. Randy was back in town for a spell, having recently returned from Venice, that wonderful adult playground near Los Angeles.

“Sure, but nobody drinks like that anymore, even around here,” Randy told this stranger, then whipped open the beer coolers and grabbing a bottle, flipped it and then caught it like a juggler. While snapping the top off with a bottle-cap opener almost as big as a crowbar, Randy grabbed a bottle of Jack Daniels in front of the mirrors and poured the visitor a shot.

I looked at Weasel in disbelief. What the hell was going on here? Stuff like this just didn’t happen – even in the warped reality of an old, run-down dive like Squib’s, home for every degenerate and renegade this side of the railroad tracks on the far side of East End.

“Howdy partners,” the stickman cowboy said to me and Weasel.

“You sound just like John Wayne,” I said, staring straight ahead. I knew he was now looking directly at us and this scared me.

Then `Mr. When the West was Won’ woofed down his shot quickly, and took a sip of beer. The dull-green color of the beer bottle flickered – I could see it in the mirrors in front of the shelved bottles. Little specks of light bounced here, there, and everywhere, sparkling like a Roman Catholic priest’s challis.

“Where are you from, Mister?” Weasel asked.

“Oh, from here, there, and everywhere.”

“How long you been in town?” I asked.

“Just got in. Drove the Hummer in from Kentucky.”

“Well we don’t have much of a welcome wagon here in this run-down river town. I guess you’ll have to just accept me and Weasel as your Plymouth Rock Indians,” I said nervously.

Weasel started laughing like crazy; and when he goes into some uproarious chortle, he snorts like a horse. It’s agitating and silly to hear. We’d been drinking all morning and now it was the early afternoon and both of us were hammered. I poked Weasel in the ribs – a love tap for him to cut it out. If Cowboy had a gun, he looked weird and wild enough to actually use it. I had no intention of being shot this wonderful Tuesday afternoon.

Weasel became a little more sober and even got a serious look on his face. Then my friend smiled at this outrageous caricature just a few barstools down from us. We were seated on our usual stools close to the front door. We always sat here because we could greet everyone who came in the bar expeditiously and we could also leave quickly, if necessary. We didn’t like bar fights or the nasty funk of drama queens.

“So you have a Hummer? That’s a pricy car, or truck, or whatever,” Weasel said.

“I didn’t pay a dime for it. I stole it in a Winn-Dixie parking lot in some town in Mississippi about a week ago,” Cowboy replied.

“We appreciate your honesty,” I said, aghast that this guy would give such a forthright confession to two total strangers.

Weasel, who had a bandana tied around his head like bikers wear, said, “Me and my buddy Charlie don’t like cops too much. Not to worry, your secret’s safe with us.”

Weasel’s a skinny little thing, only about five-foot-five and with blondish-red hair that always looks dirty and unkempt. His size and appearance, I guess, is how he got his nickname.

“Sure are,” Weasel slurred.

“Well, I’ve got another couple’a hundred miles to go and I was thirsty . . . I saw this place and decided to stop in. But now it’s time to go.”

Cowboy got off the stool and his whole body seemed to rattle, like the hissing sound a rattlesnake makes. He stood stiffly and stoically, almost the same way that Michael Myers did in all those Halloween films. After he got off his stool, this stickman walked towards the door and with a quick thrust, opened it and was gone.

Weasel looked at me with terror in his eyes. He gulped the rest of his fishbowl (we always drank Squib’s drafts since they were only a buck seventy-five a pop), and lit up a smoke. His hands were shaking and it wasn’t due to the grog, but from the insidious fear that was building within him all the time this strange customer sat very close to us.

“Think he had a gun?” Weasel asked.

“I’m sure he did. They all do, those weirdoes who come in from faraway,” Randy said as he was cleaning fishbowls at the sink. Randy didn’t look up while he was doing this task. Patsy Squib, an elderly lady who owns the tavern, always hires Randy back when he returns home. He’s a hard worker and most importantly, he’s as honest as an Amish politician. And Randy always ends up back in this Ohio River city after his sojourns (which are usually to the left coast).

“What the hell just happened?” Weasel asked me, with pleading eyes.

“I have no idea,” I answered, hammering down my fishbowl.

Samuel Vargo has written poetry and short stories for print and online literary magazines, university journals and a few commercial magazines. Mr. Vargo worked most of his adult life as a newspaper reporter. He has a BA in Political Science and an MA in English (both degrees were awarded by Youngstown State University in Youngstown, Ohio, USA). Vargo was fiction editor of Pig Iron Press, Youngstown, Ohio, for 12 years. 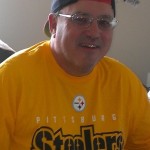