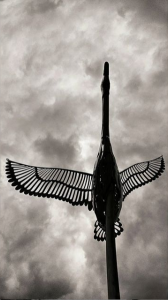 Did Kyle introduce himself to the poor creatures he, with those bread bullets of his, gave a false sense of security and providence to?

Of course he didn’t.

So neither did I.

What I did do was dress up like a duck in this fantastic, full-body duck costume I bought from New York Costumes in the East Village, and I arrived, arms laden, at Kyle’s stoop during that sweet and wonderfully pregnant evening hour when man begins to crave a wholesome and satisfying meal.

Kyle, standing next to the trashcans and recycle bins minding his own business, eyed me warily.

When I started frisbee-flicking food at his feet, he jumped back, but after this instinctive safety measure, he considered those morsels with interest, tempted most by a slice of pizza. And why not? That slice was from Lenny’s. Still hot. Still crisp.

Likewise did he inch.

My encouraging smile and well-intentioned eyes were locked on his, creating mutual trust while a motley crowd gathered behind us: curious men, women, and children observing, judging, learning.

We all watched as Kyle bent down to retrieve the unexpected gift, watched him sniff the cheese, the sauce, the fresh garlic, watched him nip and nip again before engulfing the damn thing.

But I didn’t want to push it the first day, so I leaned in and placed the rest of the food as close to Kyle as prudence allowed before backing off, slowly.

Intrigued by these new offerings at his feet, Kyle began rifling through the bag, and my smile, as I knew it would, morphed from benevolent brightness and harmless fun product into something much more rueful and complex.

I felt it—a melancholic nostalgic wonderment—and I let it pervade my whole being, let it take me even further to that effervescent feeling of belonging and oneness with all animal kind.

I basked in this feeling.

I did not feel selfish.

And then, at a completely arbitrary moment when Kyle just happened to be nibbling the crust off a piece of Junior’s cheesecake, I abandoned him.

For the next four hundred days I repeated this nonsense, stopped a week before having to move to southern New Jersey for a few sad and convoluted reasons not relevant to the tale at hand.

On day four hundred and one, sporting my regular man costume, I strolled purposefully late over to 7th Street and watched with glee as Kyle’s face betrayed the pain of confusion and disappointment, the horrors of approaching hunger.

You selfish asshole, I thought, then pitched a tent on the surprisingly copious sidewalk in order not to miss the show.

At dawn, I paid a local ragamuffin to go fetch me some coffee and donuts. When, not much later, two sleepy cops gave my tent the stink eye, I flashed a bulging wallet in front of their noses. They became civil.

Poor Kyle stood there, flummoxed and distraught. I even spied a touch of futile indignation fluttering on his upper lip.

Yes, clueless Kyle had forgotten how to live, the most rudimentary elements, and now he, a sentient being who should’ve known better, was going to die the death that he deserved.

This selfish asshole was going to starve!

“Starve, Selfish Asshole, starve!” I chanted, but… What’s this? A man in a duck costume waddling up with a bag of gourmet groceries cradled in his arms?

But the duck-man’s face was the screen on which his soul projected a rapid and terrifying transition from the mild pleasures of a minor entertainment to the much more intense spectacle of generosity-induced euphoria—of animal, world, and universal oneness—and I saw more duck-men and duck-women and little ducky-duck-children coming to do the same, and Kyle, that smug asshole, he knew he was right all along. 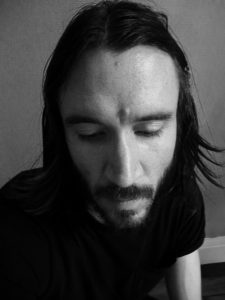