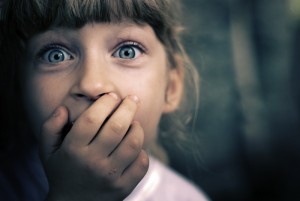 REVENGE IS A DISH BEST SERVED ON TINY PLATES

ALONG WITH MATCHING PRETTY TEACUPS

The Gothic-filigreed gate creaks as a guard closes it behind the little girl in the ruffled dress. Standing there in the morning fog, on the sidewalk outside the reform school, she looks remarkably like Shirley Temple. Dimpled, chubby face. Pretty, party dress. Her ringlets blonde and her dancing shoes black. Dangling from her little fist, a Hello Kitty suitcase: pink. She sets the suitcase down on the sidewalk, and waits.

Noirish cars —a ’49 this and a ’52 that— rumble past the girl, whitewalls spitting last night’s puddled rain onto the curb. Now a soccer mom at the wheel of a ’09 SUV. And little faces, pressed against the window, taunting her. Middle fingers extended, little tongues wagging, taunting, wagging, taunting . . .

. . .  when along the sidewalk comes a small boy in rabbit suit, cowboy boots & Snoopy-like aviator goggles.

“You must be my ride,” she says, her voice deeper than expected, and her word choice . . .  odd? But know this: she’s just pulled a three month stretch in the little-big house.

With both hands the boy puts the leathery goggles atop his head, the goggles there secured by his bunny suit ears. His eyes —blue, the whites tinged strangely pink— look her over for two minutes flat. Finally, he says,

She pauses before saying, “That a rabbit joke or sumpin’?”

The boy doesn’t answer. He extends his arm as if to shake the little girl’s hand. Instead, he shakes and wiggles his arm, dispensing two cigarettes from a pack hidden in his sleeve.

He offers her one. She simply nods her head: no.

There’s a pause. The boy appears to be studying her.

The boy shrugs, bends down, and from the four-inch cuffs of his rabbit suit he extracts a Zippo lighter. He puts both cigarettes in his mouth and lights them. Closing the Zippo with a pleasing snap, he takes a drag from the twin cigarettes. He exhales, takes another drag, exhales, and so on three more times. Exhaled cloudlets mingle with fog. Moan of foghorn in the distance. Bunny Boy lets the cigarettes drop to the walk, where he Roy-Rogers-Junior boots them into the gutter.

“Downtown?” he asks the little girl.

To which she nods and sighs —like a poster child for fatalism? a calendar girl to a year of events straying wildly beyond her control?— and climbs into the red-red wagon.

Her little suitcase at her feet, she smoothes the wrinkles from her dress, coaxing too the perfect ruffles to cover all that must be hidden.

Foghorn bleating —again— through the backdrop of the broken city. These past three months she’s done little else but listen to that horn.

Three to six in the little-big house was her sentence. She served three. Time off for good behavior; plays well with others. Pulled an ‘A’ plus a gold star for penmanship —her cursive Rs the wow of Mrs. Hanson’s School For Troubled Girls.

Three months in the pen. And all because of a doll.

Dolls: those plastic eyes, their storied “perfection,” an illusion at best.

She plucked the eyes from a “dear friend’s” doll and flushed them down the toilet. So what? Feeling good about herself for once, she decapitated the doll and melted the body and eyeless head in a microwave. And blew the remainder to smithereens with a homemade grenade strapped to a puppy. What’s the big deal?

“Disturbing,” the judge said. She was especially troubled (as she put it) that Sydney —that’s the Shirley T look-alike’s name after all —had hand-painted a disturbingly accurate reproduction of said dear friend’s face on said doll before blinding it, decapitating it, microwaving it, etcetera.

Sydney had never cared much for dolls in the first place. (Understatement? Yes.)

Long story short, her tea parties were attended not by dolls. Instead, arranged at the little table with the pretty little china teacups and matching saucers, were: battered Purple Barney; two-eyes blind Franklin D. Stuft Bear; and three imaginary, warfaring, nomadic Visigoth girlfriends. Also at the table, of course, was herself. Pouring the invisible tea. Serving —on six rose-pink little saucers— the invisible dainty sandwiches, cut on the diagonal with imaginary chainsaw.

“Disturbing?” asked Sydney, flashing her studiously brushed and whitened teeth at the judge. “Disturbing?! Lady, you haven’t seen anyth—” The bailiff wrapped his arms around Sydney like a straitjacket, stopping her in mid-sentence, her rose-pink fingernails mere inches from the judge’s oh-so pretty, feminine neck.

It didn’t help much that Sydney’s roommate in the little-big house was joined at the hip, rather literally, with a Pumpkin Patch Kid or some such monstrosity in need of an exorcist and staple remover. Sydney never asked about the doll’s back story nor its confusing resemblance to beloved Charlie Brown. But though the expression on the doll’s face was stuck permanently in quizzical, classic Charlie Brown fashion, its lips moved freely.

And night after night, that devil-doll in the bunk above, ceaselessly mocked poor, poor defenseless little Sydney. And every night and all night long, those plastic, evil eyes, in that huge round head, stared down upon Sydney and . . .

. . .  the red-red wagon arrives now at Third & Main, the boy in the rabbit suit dropping Sydney off in the alley behind her destination. An argument, a struggle.

In the Seven-Eleven next door to the toy store, Sydney liberates two cans of liquid charcoal starter.

Her pyro-paraphernalia, her party supplies —all a little girl needs, tucked inside a pink suitcase, Sydney walks into We Be Toys.

“Ma’am?” she asks a clerk. “Can you help me find something, please?”

“Of course, little girl,” says the lady, tousling Sydney’s blonde hair. “My, what a pretty dress! Oh and those precious dancing shoes . . . Are you on your way to a party, little girl?”

“In a manner of speaking, yes.”

“My, what a smart little girl you are! Polite too! Your parents must be oh-so very-very proud of you!”

Unsure how to answer, Sydney gives a little shrug. She pauses, then,

Ray Nessly hails from Seattle and lives near San Diego with his wife and their two cats. He is wrapping up a novel, If A Machine Lands In The Forest. He hopes it precedes, in publication, his obituary. His stories have been published or are forthcoming in Literary Orphans, Boston Literary Magazine, MadHat Lit, Apocrypha & Abstractions, Yellow Mama, Do Some Damage, and other places. 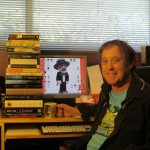