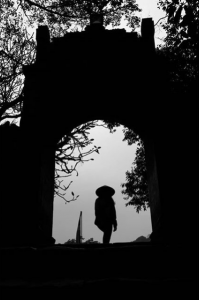 Each night that summer after she finished work and showered, after she grabbed the phone and stretched the cord across the kitchen and under the screen door onto the porch, and after her hair had dried lightly yet was still damp and smelled of sage, she called. Each of those nights he waited for the call and would come.

She had rented a cottage among the trees, away from the town and set back from the road. The path was paved with sinking brick, the uniformity of the lines contested by weeds, and lined with paper birch in strokes of crooked antique white against the thick greens. Beyond the edges of the path and beneath the depths of the woods the floor was carpeted brown with dead needles, and they imagined the needles were soft though had never bothered to see if that was true.

The air in those woods was always perfumed, either with burning sap or honeysuckle or citronella from some distant source, and those scents recalled a memory of somewhere distinct yet unplaceable for each. In the fading pink of those dusks, as the light reached down through the high branches and traced out thin shadows on the walk, shadows that crawled like hands running up and down the brick, he followed the lambent glow of a lantern to the cottage.

The lantern hung from a vined and peeling wooden trellis at the end of the path. And though within the lantern there was a bulb and the filament glowed hot and orange as the night carried on there was no visible cord trailing from the black shell. How it received its power was never known.

That was how the summer went. She made the call, he followed the light, and for each it was mostly good.

There eventually came a night when the lantern refused to glow. As he stepped from the road to the path, though it ran straight back through the trees, he struggled to find direction in the darkening wood without the beacon. He began breathing rapidly, his forehead damp, and in his chest he felt a sickening lightness, as if his heart and lungs were beginning to rise up, straining to leave his body.

He called out into the dark. She met him.

At the cottage they stood looking up at the unlit lantern. He insisted he could repair it, as he had insisted and tried to repair so many things during that summer, as if most things could be repaired. Together they carried the ladder and tools up from the bed of his truck and together they took down the strange fixture.

When it was in hand the problem could not be determined. They inspected it for a hidden switch or a concealed slot for batteries but found nothing. It had just stopped working, some essential piece of it necessary for normal functioning having failed.

So they each picked up a large rock from beside the path, raised their hands overhead, and took turns smashing the fixture until the bricks were covered in glass and plastic and metal shards like the scene of some grotesque accident in miniature. On their haunches they prodded the broken husk of the fixture, and hoping to really see its innards and faults they pried it open, only to find it filled with the sudden writhing black of hundreds of ants pouring out from a great and hidden depth where no light had ever reached.

Richard Kovarovic is a writer and independent scholar. Some of his writing has been published in Coffin Bell and East-West Cultural Passage. A native of New York state, he currently lives in the Hudson Valley. 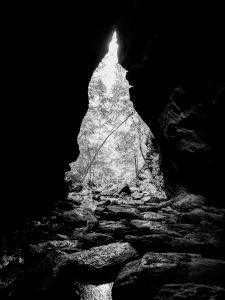