Red Inside by Lara Alonso Corona 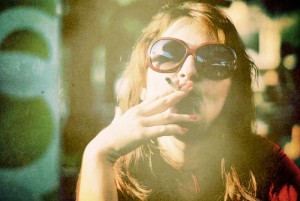 And Lisa run to her room and came back with a volume of Engels essays and she read some of it out loud as the tv show flickered in the corner of your eyes, dying out against all the lamp posts and traffic lights outside and on your wall, and she read from when Engels was in Manchester, at twenty or something like that and Lisa said that she sometimes spent whole nights thinking about him, about Friedrich fucking Engels and what it must have felt like for him, to be so far from his country, in a tiny rented room in Manchester writing all these wonderful, revolutionary things at night, maybe by candle light. And you said oil lamp, it was most probably oil lamp.

Today is veal delivery day. You love veal delivery day. The guy who brings it leaves it on the counter and when you come real early, proper early, you can see the hacked animal resting on the table, what’s left of its legs up in the air, and it should have been ridiculous, grotesque even but you think it’s beautiful and bizarre, thinking of what a handsome animal it must have been and what a picture it must seem to somebody walking pass on the street, all these raw flash perfectly clean, perfectly aligned on the bar counter – which is okay, the place is so clean that the meat is probably better off here, exposed, than in the fridge. But then they carry it to the fridge and they cut it up and this odd postcard is gone and you feel sad somehow. But you really love veal delivery days.

Once you asked Lisa – you were coming back from partying, you were crossing through Hoxton Square and its Cube was somehow luminescent, an invitation to smash all its windows, and you remember asking Lisa if she thought scientists would ever come up for a formula to determine the exact moment people fall in love. Lisa said you sounded like a twat and you were drunk and that she’d be more interested in knowing the exact moment people fell out of love, that’s the fascinating moment. You thought fuck, should I be worried? Should I? But she kept on walking and talking and saying that either would be impossible to prove scientifically, and that even talking about it is like going up to your rooftop and laying on your back and throwing a paper plane right above your head trying to make it land on the same spot you threw it from, perfectly perpendicular. You could never do that because there’s always the wind fucking up your plans. The wind always fucking up your plans, Marga, she repeated, looking straight at you.

You thought, really, what you thought was: What the hell is she talking about, the keys to our roof don’t work haven’t ever worked, since the day the woman at the agency gave them to us, we’ve never been to the rooftop?

There’s a woman who takes her cigarette break at the same time you do, each day of the week. She comes down from the office building crossing the road. You should talk to her. Maybe you should. Maybe this is it, this grey, uneventful Thursday. Go talk to the woman. You have Lisa but this woman has amazing knees. The most beautiful knees you’ve ever seen. The way they cut the veal on delivery days, limb by limb, the flesh so soft it’s almost repulsive and the colour of the muscle and the insides of the beast, the inside of the woman’s mouth as she sucks on the cigarette.

Lara Alonso Corona was born in a small city in the north of Spain. She completed her Film and TV studies in Madrid before moving to London to work towards a Creative Writing degree. Her fiction has been showcased in ABC Tales and the Glass Woman Prize, and more recently she has been published by The Copperfield Review, Devilfish Review, 50-word Stories and The WiFiles.