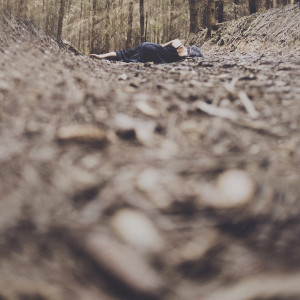 My father’s locked in on his final approach. It’s raining but not too heavy; he’s flown in weather before. The squall is still miles out but I’m sensing a drop in pressure. The wind shear comes at the field, a ghost-like ripple in the rain. My father has seen it too. He’s powering up and banking left but it’s too late, the wall of wind catches the plane by its tail – they stall – the nose lifts and they slide down into the woods on the other side of the meadow.

I’m running and cursing and screaming. It’s starting to hail. I’ve already crossed the runway, hurling myself at the wall of smoke and into the ragged woods. My eyes are burning. Saplings and thorns tear at my face.  I’m using my arms like machetes. The rain’s coming down in torrents. I break through the smoke and see them, the cockpit still intact. One of the wings has torn off; it’s burning huge and bright. I run through the trees till I trip and fall, crashing down over a log, landing hard on a jagged piece of metal. It’s white hot and rips my shirt open.  I hear the hiss and then smell my own body, like bacon thrown on a griddle.  It doesn’t hurt so much as snap me back onto my feet.

The plane has rutted and scorched the ground.  Everything is on fire.  The rain isn’t helping. Where the wing is gone the doors of the plane have come off. Incredibly, my mother and Andi are still alive. My father is dead, his body slammed into the console.  Chrissie, my ten year old sister, is gone. She must have been thrown when the plane first struck.  There’s no time to stop and think. My mother’s neck is badly cut and her blouse is dark with blood. She’s trying to move.  Andi is still strapped in, the fire burning the side of her face and leg where the fuselage buckled.  She’s struggling and screaming. Her arms look wrong, they must be broken; she can’t get her hands near the buckles.

Andi doesn’t even know I’m there till the belt comes off and I grab her. The fire comes in, taking my hair and sticking my eyelids shut.  I force them open, holding onto her waist and dragging her out of the plane.  She whimpers and lets out a groan so low and hideous I nearly stop, but I keep on dragging, over the stump of the wing and through the mud to the log I tripped over.  There the fire has burnt itself out.

The rain is still coming and it’s hailing again, turning the scene to mud. I hear the sirens.  One of the big red ladder engines is trying to run up into the woods, ramming its way through the bush. It stalls, backs up, and comes at the forest again. I’m laying Andi down near the log – no time for comfort – then stand to go back for my mother. She looks up, recognizing me. “Don’t leave,” she says. Her voice is thick and labored.

“I’m not leaving,” I tell her, then feel rather than hear the explosion coming.  It lifts me up, sucking the air from my lungs and flipping me backward into a puddle behind the log.  The log tries to move.  I’m losing it now.  The log’s reaching out, turning into my sister, turning back to a log with burned off branches, eyes like two white mushrooms.  At first I’m thinking she’s crawled up inside but no, she is the log, and the wall of flame is coming and then I’m on fire.  I start to roll in the puddle, trying to put it out.  Men, dressed in silver suits and carrying silver bottles appear and cover me over with foam. I try to stand up. They’re covering Chrissie and Andi, the same gurgling clouds. I manage to get to my feet, stagger, try to maintain some balance. Everything’s spinning like when we were kids. A woman wearing a yellow helmet is telling me not to move. She touches my forehead with only a finger, pushing me onto a stretcher.  Silver people carry me through the forest.  Others are running nearby. They glow in orange and blue patterns beneath the burning trees.

Then we stop running.

The stretcher rises, bumping me into a medevac bus. It’s all red chrome and computers inside. I’m watching them work on Chrissie and not work on Andi. They’ve taken their fire masks off – so many people – all of them crammed inside this tiny space and talking on radios, opening packages, asking the radios questions and then not talking, just doing, the bus bouncing over the field until I can feel the runway smooth and floating and then we stop. My chest starts to pound; the whump whump whump of a chopper flies overhead. The woman who was wearing the yellow helmet sees me looking at Andi and tries to smile. She takes off one of her gloves, reaches over, touching Andrea’s cheek like a mother; then covers her face with a blue paper towel.

“Go to sleep now,” someone else says, pushing a needle into my arm. A warm wave drags me under and, though I’m ashamed, it feels so good and I smile, drifting away, seeing them there in the kitchen that morning, the battered oak table, my mother in her mother’s apron heating syrup on the big Tappan stove.

The Sea is our Mother, Chrissie is chanting.

Out on the flagstone porch she’s gathered up all her stuffed animals, seating them there on the sill with the potted plants and flowers. I’m standing just inside by the screen door. Andi sits in her usual place on the banquette under the window, a raven haired pixie dressed in ten shades of blue. She can’t erase the smile of our secret, everything about her shimmers in light these days. My mother and father are doing their best not to notice. I’m sure they have guessed by now.

Out on the porch Chrissie raises her arms in arabesque. Shafts of sunlight filter the room. It rained that morning but now it’s clearing. Off to the east our fields light up and cloud shadows walk through the barns.

The Sea is our Mother, Chrissie is chanting.

I look into Andrea’s eyes.

The Sea is our Mother.

Chrissie bows and the bears applaud.

My father looks up from his paper.

Derek Osborne lives in eastern Pennsylvania. His work has appeared in Boston Literary, Bartleby-Snopes, The Linnet’s Wings, here in Literary Orphans and many others. His serial novella, “Falling in Love with Rebecca Vasquez” is part of the Pure Slush 2014 Series. A stream of consciousness piece, “The Night” was recently nominated by Flash Frontier for a Pushcart. To read more or contact, visit: http://gertrudesflat.blogspot.com, or email at derekosborne1@gmail.com. 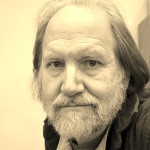