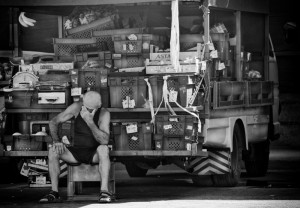 There is something you are letting yourself forget. Right now, something is happily slipping from your mind as you lie on a mattress, cocooned in a blanket. Something about your grandfather—your father’s father—the forgetting. It is probably happening to your father too, right now. Now, you have grown to your full capacity and your brain is filled with language that you can speak perfectly well. Yet you feel it vaguely in the base of your spine, what you forget. You remembered to lock the doors, you remind yourself lying there, awake. There is something you are not remembering. Something you’re remembering to forget.

In a bed with plain, white sheets is an old man with skinny legs and a baby’s face. He is toothless. He grins and cries in alternating cycles, triggered by nothing—the angle of the mattress, a shift in the wind. He stares blankly at a wall covered with faces and cards from strangers who have signed their names “With love.” He is always there, not waiting for anything, not expecting anyone. Above his eyebrows there is a birthmark shaped like an island on the globe of his smooth, bald head.

In the morning, you remember no dreams. You see a neat yellow pad on a stainless steel counter, the printed word MEMO in large block letters. Below that, a list of things in your own scribbled writing with the ink of a drying pen: gym bag, lunch bag, cans. You do not remember what that last word means. Cans? Cans of what? The S on the end is almost invisible. You have since thrown out that pen, having outlived its use. Cans of what? Is it starting already? The forgetting. As you carry it all into your car, all the different bags you wanted to remember, you feel it; what you forget.

You drive to a place where you will work, eat lunch, keep working until the sun sets and still you are forgetting, or trying to. In your back pocket are: wallet, cell phone, keys. You are reminded of your father looking for the stethoscope, tearing apart the house, just to find it hanging tauntingly around his neck the whole damn time. The whole damn time. You remember thinking he must have known it was there though, right?

There is something you have successfully not remembered in the afternoon when you make a second cup of coffee. You are thinking about the mornings that started with soft-boiled eggs. About a time, long ago, when you measured your age in quarter years. Eight and three quarters, nine and a half. When a day felt long. When a snack meant a single oreo and juice was sucked from a cardboard box. There was a time when your speech was impeded. When you lisped on your S’s and could not fully enunciate your R’s. You went to special classes to learn to speak right. They say you used a baby voice until you turned double digits, and even then you still did not talk much. What’ s wrong with the kid? your dad’s voice asked. The kid. Back when you lost your two front incisors at once and chewing anything was hard for a long, long time. The older boys made fun of you and made you eat mud pies through the gaps at recess. You remember the taste of all that dirt, feeling like you could choke on it.

You passed your tongue over the empty space on your gums so much you were afraid you had pushed the grown-up teeth back down. It was a whole three months before either of them began to grow back and then the taunting finally stopped. That’s the way it is, you realize, passing your tongue over empty space, keeping things buried so they don’t resurface even now.

There was a time you could count all the haircuts you remembered having. How silly you felt, sitting on that chair pumped up to the top-most pump, starring into your own two eyes with your wet thin hair combed straight across your forehead. How afraid you were that this time, this time, she would snip your ears with those cold scissors. How ashamed you were that you could not pronounce your own name. Your dad looking on from the edge of the mirror measuring you up. And how long has it been now since he made you a soft-boiled egg and you ate together?

You are driving home, annoyed by the traffic, trying hard to keep forgetting. There was a time you enjoyed being driven and your feet dangled loose-limbed off the backseat. You would ask all sorts of inane questions as your father kept his eyes on the road. What is a tongue made of anyway? And What’ s the opposite of memory?

Nobody knows, your father would say curtly. Or in moments of rare tenderness, you know son, some things we just aren’t meant to know.

When you pulled up to your grandparent’s house you were greeted by the smell of mulch beside the driveway. In the backyard was a tree house you had painted with your hands. If you tried now you could feel the sensation of dipping palms into thick, cool paint, pressing hands against plywood. Careful to always leave your mark. Is it still there? Your grandfather designed the blueprints for the tree house. Back before the forgetting. Something is nagging at the back of your head. Is it still there? When you touch it, there is nothing. Is your hair thinning?

The old man watches the lights in the parking lot dancing red on the windowpanes. The silenced sirens of ambulances that take and leave new neighbors, old. He does not know this and does not know to ask. He sits and shows his gums and basks in the glory of the sirens coming and going, taking and leaving. They do not wail once they reach the lot, but their lights are beautiful to watch. There are frequent vacancies in this hall. “Musical beds” the nurses like to say.

In the evening, you watch TV and think of your grandparents’ attic which you preferred to the remodeled playroom in your basement with all those video games. What’ s wrong with the kid? your father would ask again, as if he forgot. As if he were already forgetting. Your grandfather often accompanied you on your journeys upstairs, though the crawl space was more than slightly cramped. When he spoke, his thick accent made you think he had a mouth full of soil. You are not sure what you meant by this but you remember thinking it. You would lisp back your responses, neither of you fully understanding each other. Even then he would call all his grandsons “Mr. President,” all his granddaughters “Miss America.” Terms of endearment to mask that he could not remember their names. There was a dog they called Goldie who nobody loved but everybody loved to have around. She would be waiting for you on the stairs. Stupid mutt, your father would say. When the two of you climbed down, the light would blind you and bounce off Goldie’s yellow fur and you would think for a flash of two babies being born.

In a building called The Home a son arrives with a bowl of mushy ice cream. He feeds it patiently to his father who has forgotten how to eat, and he wipes his father’s face with napkins after each and every bite. There is a stethoscope dangling around the son’s neck that he has forgotten is there. The plastic spoon is mangled by the time the bowl is done and the birthmark on the father’s head is smooth. There are dozens of napkins in the trash. The father does not recognize the man who sits on the foot of his bed giving him something cold and sweet and familiar. The father keeps speaking in a language that the son does not know, about people that the son has never met. The father cries between bites, begging for just one more. One more.

A long time ago there was a space in your yard where you buried a time capsule in the soil. A tupperware with pictures of your grandparents. Your grandfather with hair then, but still the birthmark on his forehead. Your grandmother looking devoted and strong. Both speaking a language that sounded like a mouthful of earth. What do you want those things for? your father asked. Back then he was already trying to forget.

But you buried it until you were tall enough to reach the sugar cabinet, that was the idea. When you were taller, then you’d dig it up. But your teeth grew back and your body sprouted and you decided not to. Better to leave it buried than to get your hands caked in dirt, your fingers covered in mud, just to find maybe that what had been there once, was gone.

Rebekah Bergman writes fiction and poetry. Her recent work is published or forthcoming from Spittoon, Banango Street, and Underwater New York. She is an associate editor at NOON and an MFA candidate at The New School. 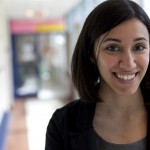