His Memories by Corey Farrenkopf 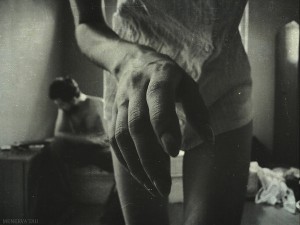 Each day when his nurse, in her white pleated dress, placed the breakfast tray in his doorway, she found him in the same hunched position, back arched over the surface of his child-sized desk. She thought of her own children: how they could never squeeze into the shrunken fixture. Old age had sucked up the muscular vigor that once lay heaped on his bones. His clothes hung from his limbs. His veins, thick as eels, swam beneath the translucent film of his skin. All he did was write: about what, she knew very little, but his pencil was always moving, scratching out letters she wasn’t permitted to see.

One day, she tried to snatch a piece of paper from his collection, but the doctor was there, standing in the door where he hadn’t been before. He mentioned HIPPA violations and the contracts she signed. They sent her home that afternoon without pay, knowing nothing more of the man’s story.

What she did know was that he relived a life everyday.

The old man had a silver beard that lay in twists and turns, undulating about the desk. It hadn’t seen a razor since he was twenty-seven.  It bulged at odd intervals, hiding shadowy treasures beneath the froth and foam of a swollen river. Over the course of his malleable life, mementos and reminders had broken the water’s surface, becoming lodged in its muddy bottom. His fingers traveled its length, pulling one item free, remembering its significance, then moving to the next.

The doctors diagnosed Alzheimer’s. The man insisted it was the simplicity of old age. Regardless, he would write what he could remember about each keepsake, tracking the swell of a life nearly at its close.

The first thing that shone from beneath the water’s surface was a silver medal won in a regatta off the coast of Nantucket. He saw his friends hiking their heels over the edge of the boat, leaning their backs into the waves as the centerboard held their course. He saw the podium, the damp, blurry party that followed, the amber bubbles drifting through his beer, and the woman in his bed.

A wedding band fell from the man’s wrinkled fingers. It was the hazy girl from the victory celebration. A child forced the union, but it was happy nonetheless. He could almost make out the scent of citrus the lounged on her skin, the subdued yawn that drifted from her lips as he woke her from sleep.

Dried blades of grass were knit in criss-crossed expanses within the tangle, clippings from countless park strolls with his daughter. They were yellow and brown. Autumnal odors escaped their prisons when he snapped them in half, holding the break to his nostril.

As he remembered, he grew content believing his life had been worth those accumulated years. He’d gaze out the window, past the blackened steel bars, to the bird feeder just on the edge of the grounds. His nurse would catch his naturalistic wanderings and mid afternoon smiles as she dropped off lunch. Egg salad. Pumpernickel. She wanted to read those notes, but never tried to collect a second sheet. The doctors always watched. It would disrupt the healing process, that’s what they referred to it as, always laughing to punctuate their sentences. The old man never remembered her name. She never knew his. It was scratched from the tops of medical records and prescription pill bottles, as if he didn’t exist.

The carcasses of fireflies rustled with the voices of his grandchildren. Boys? Girls? No answer, just short, flaxen hair and loose denim shorts. He recalled swim lessons. The electric blue water rippled with chlorine waves as he held the child afloat, feet sweeping a disjointed kicking pattern.

Just before dinner, the prayer card from his wife’s funeral would fall into his lap, pink and blue pastels. Maria raising a calming hand. He’d read the dates, birth to death, natural causes, and recall the life he believed they shared. She gulped each day’s breath, sang at New Years Parties, sipped coca-cola by the pool in late summer until the mahogany boards were nailed over her head.

With the dinner plate, his nurse would find him wailing, shrieking in concussive bursts. Always on the floor, babbling through the bulky silver mess of his beard. She’d sit him up in the recliner just left of the desk and settle his plate before him. As ordered, she’d crumple up the paper, adding it to the pyramidal heap rising from the waste basket, not a single word syphoned from the surface.

He groaned over the copper stench on his jacket, the rubbery warmth of intestine pulsing in his fist, how they looked like large worms in the sink. Then he’d heave and retch, forcing strings of mucus across his supper onto the floor, closing the last scene of his remembered life.

The nurse asked the doctors why she had to care for him in such a way. They talked of penance, the payment of dues, completion of sentences. It was a reminder of how life could have been had he not dragged the heart from his wife’s pregnant chest, carved the corneas out of her lover’s eyes before their first child was born. She mentioned quitting, they mentioned rent checks, her children’s Christmas gifts, the line of CNAs waiting to take her place.

She never mentioned it again. The job would exist even if she didn’t.

And as the old man slumbered and drooled over the wiry bristles surrounding his chapped lips, his nurse would reorder the keepsakes, weaving them back into the folds of his beard, making sure the grass spread its field above the wedding ring, that the fireflies hadn’t disintegrated to dust. She’d pause at the knife, flicking it open and testing its weight, never taking the final step, blade to skin. Back it went.

Before she left the room, locking the door behind, she’d place the paper and pencil on the surface of the desk, only knowing the final words of the story, never the beginning.

Corey Farrenkopf received his B.A. and M.Ed from Umass Amherst.  He works as a stove technician. In the evenings, he writes novels and short stories in an attic space with a single skylight. His work has been published in Gravel and The Avalon Literary Review. He lives on Cape Cod with his girlfriend, Gabrielle. Follow him at: https://www.facebook.com/Corey-Farrenkopf-878165935599304/ 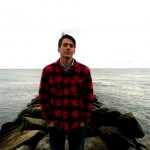