She is called Helga. Rob didn’t name her. She came that way. Thirty-years-old but shiny and, in two places, very red, she is something he would not have thought himself capable of handling.

Rob stays trim with yoga and kale-heavy minestrone. He grew up stringing words together and calling them poems. His father, a gerontologist, had a passion for anything old. He watched Rodgers and Hammerstein on Sundays, and so Rob learned every tune sung to Shirley Jones. He still hums these songs. He knows this is not cool. That he is not cool. Still, outside of his apartment, he tries. He arranges his tools and polishes Helga. If his repairs are awkwardly administered, she does not suffer. He tinkers with her tenderly.

Rob rides her to the college where he teaches. To the farmer’s market. To his favorite bookshop. He owns an extra helmet, so he can take a friend to the beach. Sometimes he and Helga escape the city. He wonders at the windstorm they make and how she moves under him. He can hardly believe his luck.

One afternoon, he stops at an intersection where men have gathered in an orchestration of leather and glinting chrome. A gang! Rob gawks.

A rider spots him and orders, “Let’s hear her.”

And the professor revs Helga to a growl, to a tangible purr. She sounds precisely how he feels.

Melissa Ostrom teaches English in rural western New York, where she lives with her husband and children. Her fiction has appeared in many journals, including Lunch Ticket, decomP, Monkeybicycle, and Juked, and her first novel, Genesee, is forthcoming from Macmillan in the spring of 2018. 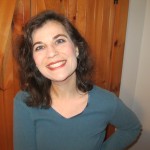