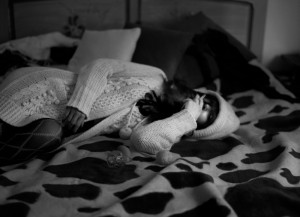 Mina don’t put up with no “baby girl” or “hon”, says she had an old boy who made her his baby once; he put her in skirts and held onto her at intersections. Sometimes I wonder if she means old or old but I never ask and never call her my baby girl. Meanie is what I call her. She calls me Bug or Fuzz or Mold. She calls Jesus when she finishes. Every night for that first month, she’s all Jesus, Jesus, Jesus, and I’m all good, dreamless sleeps.

I meet her in July and by Shark Week I’m almost moved in. Bug, she says one night, turning towards me so that one side of her face is lit up by the bluish glow from the ocean on her TV. When she’s nervous, like now, she pulls the collar of her T-shirt to her mouth and bites down. Her canines are too big for her lips and just a little crooked. She complains that her parents couldn’t afford braces back in the day, but I’m so glad. Bug, she says, I have to give you something. She’s beggin’, Please do not freak. Meanie reaches across my lap and pulls a jewelry box out of the condom drawer. It’s flimsy and wooden like a C+ in a high school shop class. Open it, she says as she hands it to me. Inside is a bullet. Oh.

See that? she asks. That there is pure silver.  Listen, Bug, she’s says, every now and then I get this thing­—this allergy or somethin’­—and I turn into a butt-ugly, fat-fucking, mean-ass werewolf.

I just shrug. This girl came home once shouting about how she wanted to shelter displaced frogs. She sat me on a rooftop once and made me mold tinfoil into wiry shapes so we could hear the aliens talk dirty. It’s not so strange for her to call herself a werewolf. Then she starts yelling at me that she’s not foolin’ around. There are Meanie-sized tears in the corners of her eyes just waiting to fall and she’s yanking at her collar. What else can I do but believe this girl I love?

Promise me you won’t ever use it no matter what. That’s what she says instead. No matter what? What about the throat? Nope, you gotta promise. What if you’re goin’ all Lunchables on my leg? No, you can’t use it then either. What if you’re about to unhinge your jaw and eat Mom? Mold, she says, wolves don’t unhinge their jaws, but still, hypothetically, no. Promise? I ask her why in fuck she’d give me this damn thing to shoot her with if she never wants me to shoot her. She brings her thumb to her mouth and starts to gnaw at it. Then she asks, What’s the point if you didn’t ever even know how’ta kill me? A second later, she just turns back to Great White Serial Killer as if nothing’s happened. The light across her face turns red as something on the TV chomps the head off of something else.

Mina watches with her mouth open, tonguing the sharp tip of her tooth, and I wonder if that’s where this is all headed. I take the bullet out and hold it between my fingers. I try and picture my Meanie covered in fur, mouth oozing blood and drool, tail wagging. I can’t. Instead, all I can see is some gray-haired cowboy with a skirt in his hands, lickin’ his teeth. My grip tightens around the metal.

That night, Mina howls in her sleep, and I stay wide awake, wonderin’ who might kill who first.

Cara Dempsey is a student at Skidmore College. In the second grade, she wrote a report on armadillos. After careful deliberation, it was deemed the best report in the whole class. She was rewarded for her hard work by being forced to read it in front of the entire school. The experience was nightmarish, but the armadillo report remained her most significant literary achievement for many years. Her work has appeared in Cease, Cows.