When the officious voice on the phone tells Marcel that they’re holding his father at the River Street station lock-up again, he’s listening to Scarlatti and fingering the familiar photograph.  Eight giants in basketball uniforms embroidered Inter Bratislava stare into the camera and the ninth grins and winks.  Marcel’s father is the shortest by at least six inches; the others are players intent on a championship but although Marcel’s father is wearing the same uniform, he’s not only a pygmy but his grin says he’s on the way to the slapstick tryouts.  He’s just crawled out of deep shit and about to go looking for more.

Hillyndale Home has a remote control buzz-in system at its front door and a security camera, but those determined to wander off can do a soft-shoe shuffle on any system in the world.  Marcel’s father is not deemed a danger to himself or the community.  His tranquillizer dosage is low and they don’t strap him into a wheelchair.  He tells the residents and personal service workers tales of winning basketball championships and war medals, of returning from Troy with Odysseus, and of being at Janosik’s side robbing the coaches of the wealthy and distributing gold to the peasants.  His Slovak accent gets heavy when he’s excited and they don’t make out all the words, but their eyes shine in the presence of a hero.  This is the fourth time in the last year, however, that he’s made it to freedom through the front door and last time the director tut-tutted about liability and time to think about a more suitable environment.

When Marcel arrives at the police station, his father says, in a gravelly voice, “Thanks, syncek, for rescuing me.  I spent all the gold from the robbery on buying borovicka for everyone in the pub and now the comely maidens have gone and the jail keeps begrudge me even a slice of black bread.  No justice for heroes.  My companions all hanged. I am too young to die.  I thought I’d have to stretch out my wings, fly out the window.  A blessing that you have a place at court and the ear of the prince.”

He bellows “Goodness gracious, great balls of fire” although it sounds like “gutnes” and “ov” and his “r” is hard as granite.  His voice is ravaged by drink but still stage-ready. Marcel winces, but one policeman is busy with paperwork at his desk, the other with a whore he’s booking. Without an appreciative audience his father deflates.  Marcel smells vomit on his clothes and when his father burps theatrically, the reek of beer.  Where did he scrounge the money, he wonders.

His father leans closer to Marcel.  “Everybody says they’re green, but they’re the same pink as blue-blooded Slovaks.  They were going to reprogram your mother on their planet, so I had to beat them off, you know.  They might have broken my nose but I’m still here and they’re not.  Your mother has sauerkraut soup ready for us.”  Marcel notices a bloodstain on his father’s shirt, the gut like over-ripe pears, a red smear in the stubble on his right jaw.  A cop might have slugged him as he threw him into the paddy wagon, but maybe he just fell.  Marcel was told by his father’s therapist that the delusions have to be challenged immediately, that he should firmly ground his father in reality, that his father should not be allowed to spout gibberish.  But Marcel is tired of the truth. He’d prefer Martians carrying his father off, and after a heroic battle a return to mother’s home-cooked soup.  He settles back to await paperwork, fines and release back to safety.  The size of the bribe to the cops, he knows, will be determined by how much he fusses.

When his mother died eighteen months ago, his father was in rehab, drying out again.  She’d decided to leave him, go back to the old country now that the Curtain had fallen, that she’d had enough drama in her life and would settle in her ancestral village to the quiet of church bells.  Marcel supported her but then the doctor delivered his grim prognosis and six weeks later her soup-cooking days were over.  Marcel wasn’t prepared to quit his job to look after his father and wasn’t equipped even if willing.  He asked his father if he wanted to go back to his roots, live in Mosovce, speak Slovak all day, drink modranske wine and liptovsky rum and his father, surprisingly lucid, laughed.

“Who’d look after me there, after forty years?  Some niece, hoping for an inheritance? Here I have you.”  Then he lowered his voice, “And you know, when your mother comes back from her trip, I may need to help her get on her feet.  It’s not easy for her, you know.”

Hillyndale said they’d keep him safe.  Now Marcel wonders if he’s too crafty for them.  He can taste the buzz of bees under his eyelids, their sting. “Dad,” he says, “when you go back to Hillyndale you’ll have to behave,” and his father laughs, grins like an eight year-old being reprimanded for stealing a cookie.

On the drive back Marcel notices the lindens are in bloom.  It used to be an annual ritual to gather the blooms, dry them and then sip the tea all year, cure for every ailment from a cold, through a sprain to a broken heart.  One year his father carved the soft white wood and made Marcel a figurine of Janosik carrying an axe.  He’d like to stop the car, gather an armful of the blooms and bring them, dried. When he points out the flowers, his father is curled in the back, snoring.  Marcel sighs.  In better days he and his father watched Casablanca together and recited lines with Bogey. He’d love to believe that “This could be the beginning of a beautiful friendship”   but knows that in a month or two, some soul-crushing night, when he’s finally drifted off into a tortured sleep, there’ll be a call from a weary policeman, requesting another bail-out from lock-up.  I should bring him a bouquet of balloons when I next visit, he thinks, or a basketball.  He breathes in the sweet aroma and begins to hum Whole Lotta Shakin’ Going On.

Andrew Stancek grew up in Bratislava and saw tanks rolling through its streets. On occasion he has claimed direct descent from Janosik, the Slovak Robin Hood. Other times he has talked of his distant cousins Jerry Lee and Elvis. These could be tall tales.

In the world of reality he writes, dreams and entertains Muses in southwestern Ontario. His work has appeared in Tin House online, Every Day Fiction, fwriction, Necessary Fiction, Pure Slush, Prime Number Magazine, r.kv.r.y, Camroc Press Review and Blue Five Notebook, among many other publications. He’s been a winner in the Flash Fiction Chronicles and Gemini Fiction Magazine contests and been nominated for a Pushcart Prize. The novels and short story collections are nearing completion. 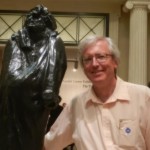