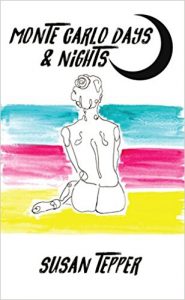 Susan Tepper’s novella-in-flash, Monte Carlo Days & Nights, invokes the laissez faire days of the 1970s and a couple spending a week enjoying the many distractions of the south of France and Monte Carlo. The unnamed narrator, a flight attendant with an American airline, sashays her assured way through the pages of the novella, making love, eating at fine restaurants, and pondering the status she holds in the eyes of her male companion, an indeterminately-aged music executive who spends his time showing Paul McCartney around New York City, and at other times indulging his hedonistic side with “the whores in Thailand.”

Throughout, there’s an edge to the relationship between the two lovers, an edge that signifies the power struggle between beauty and power, one which makes for an uncomfortable journey through their time together. Tepper’s book harkens to a time when much went unsaid, and the sexual tug-of-war between the two characters in her book seems a little incongruous in these days of #metoo and myriad sexual allegations across political and entertainment realms. Nevertheless, the author’s subversive sleight of hand provides a sharp and nuanced commentary on life and love.

Tepper’s humor as a writer elevates this short novella above being simply a mundane account of sex and awkwardness in a bygone Europe. The music business executive is clearly a man used to being waited on hand and foot, a man who expects everything to be delivered on time and to his satisfaction, so in one of the most humorous sections of the book, “Adjacent to Central Park,” the Ritz Carlton experiences a water main break and post-coitus, the couple must clean up for dinner at Sardi’s, and with her airline experience, the woman suggests they send out to the nearest Duane Reed for some wipes. The ensuing scene is rich in humor, tinged with the discomfort of the privileged male, whose distaste is palpable.

Susan Tepper’s eye for detail infuses the novella with a layered, realistic patina of authenticity. From the wallpaper parrots of the opening vignette, to the price tags in the Gucci store in San Remo, the smallest detail is noted. Nothing escapes Tepper’s eye, and the visit to the man’s parents in Westchester, in “Profiteroles and Tea,” allows the narrator to let slip the possibility that her lover and his mother “may have had sex at some point during his childhood.” It is these cutting observations and commentaries on the lifestyle of the rich and famous that makes Monte Carlo Days & Nights a little gem in the recent offerings from the independent presses.