Into the Morning Light by Steve Bargdill

We snuck from our dorms into the two a.m. late April nights with the air still bitter from the winter left over. We wandered past the library’s modern art installation—big orange hollowed out geometric shapes—then past the fraternities and sororities. We found ourselves, almost by accident, in the cemetery underneath a broken angel. Her left wing shorn off, her face downtrodden, she covered her tears with her left hand. It was said, if you kissed her, you’d turn to stone. We laid in the cool grass, resting our heads on each other’s stomachs, searching for shooting stars. Thin blitzes of white, quickly fading scars against the black, and when we spotted a star, we shouted from our diaphragms a loud “Ha!”

It was me and Lee, Ryan Green, and Meredith.

We were all in love with Meredith. But it was Ryan who dated her.

Meredith whose last name I don’t remember, who had the strangest hair: pale and transparent with frizz that made a halo anytime from above the trees and past the tops of buildings—Engineering, the Harshman Quad, University Hall—the moonlight struck her at right angles. Her hair straightened underneath the pull of your index and thumb; let go, and her hair curled right back.

She kissed us all.

We watched her skip through rain, eat ice cream cones at the Dairy Queen. She always managed to get a dab of cream on her nose, and we fought to see who got to wipe it clean. We too wandered the back shelves of Pauper’s Bookstore where the paperbacks were stacked to the roof in unstable towers, where the proprietor spat a little when he talked, where we were handed back two dollar bills and fifty cent pieces for change, where Meredith pointed out specific books: The Rachel Papers, The Story of O, The Tropic of Cancer. And she bought pitchers of beer for us at Myles Pizza as we watched all the crazies dressed in medieval costumes on Thursday nights take over the bar, and she once dared them all to lift their kilts.

She sat beside us in the back pews of St. Thomas More’s during Sunday service because we still felt the Catholic pull of obligation; she pointed to the ceiling. It was in the rain students had raised the church, the lumber for the ceiling freshly stained, ruined from the rain. They built anyway—the ceiling like the bowels of an ark turned upside down, the thin pine strips left stained with a million fingerprints. Meredith ate with us holy communion, but whispered she was never Catholic.

It was too Meredith who taught us the shooting star game.

I remember returning to my room. Lee sat in his chair reading Heavy Metal Magazines, watching Star Trek the Next Generation, eating Fruity Pebbles dry from the box, cereal pieces dropping down his chest and stomach. Ryan and Meredith were in my bed, and I yelled at them. I yelled at Lee for making a mess of the cereal—it was my cereal, the only food I owned shipped out to me by my parents, my cafeteria dining card having reached its limit a week ago. I yelled at Ryan for being in my bed. I yelled at Meredith, who looked about to cry.

On my windowsill I kept a small potted fern, a rubber snake wrapped around the base of the pot, and I remember Ryan jumping from my bed, staring me down, unwrapping the snake, twisting it in his hands, wringing it out. He wrapped the snake around my neck and pulled and pulled. Lee and Meredith both grabbed Ryan’s shoulders. The snake dropped to the floor. Ryan seized my neck with his hands, his fingers pushing in at my throat. He was in front of me, and I saw into his eyes, his nostrils flaring, though I think now he had stopped breathing in that moment when Lee and Meredith wrenched him away. Cereal, all I had left to eat, littered everywhere like sad crunchy confetti.

That is when we went to the cemetery, noticed too the sparse number of shooting stars streaming across the sky, and Meredith told us about the game. So we are lying there, in the cool of the grass amongst the gravestones, underneath the weeping angel, ha’ing, our heads bobbing upon each other’s stomachs. Then, for a bit, the sky was silent, and we all laid quiet, didn’t dare speak. And a fantabulous star shot across the horizon. We all saw it, but it was Ryan who shouted. Not a Ha, but a I Have –––. And we were all silent before the dawn, the morning birds singing, and we made our way back towards our rooms. Found again the modern art installation in front of the library. Ryan began climbing the art and we all followed. First Meredith, then Lee and me. We climbed the hollowed shapes and howled and howled at the setting moon.

Steve Bargdill teaches Great Bay Community College students the values of a good sentence, though he used to drive semi-trucks cross country. He’s an MFA candidate at the University of New Hampshire, and his most recent publication was with Tinge Magazine. He lives in Dover, New Hampshire with his cats. You can follow him at stevebargdill.com. 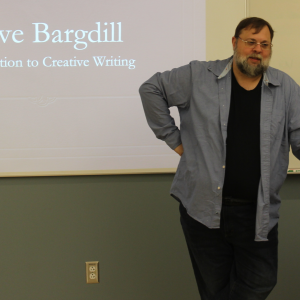