On the House by L.L. Madrid 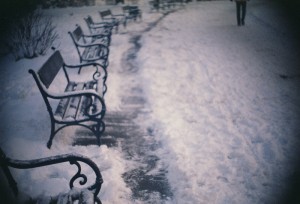 In the early hours of a not-so-long-ago Christmas Eve, snow blanketed the prairie patchwork and rolled through the wide, empty streets of Buck, South Dakota. In some other place the snow might have conjured up a pastoral quaintness, a season’s greetings sort of charm. In Buck it slabbed every available surface like poured concrete. Heavy. Artless. The glumness would endure all winter. No cheery garland. No shop windows festooned with holiday paint. Road salt would mix with gutter mud and freeze over until the next snow, leaving gashes of brown along sidewalks. No one would clear it. Not in Buck.

This was the sort of place where folks knew each other, helped out their neighbors, and passed judgment quietly. The general and feed stores, the lone greasy spoon, the bar, the barber, and the grocers—all stayed consistent throughout the decades, with nary a name change nor handoff in ownership. Promotions and hirings were dependent on retirements, or, more often, expirations. On occasion one of the town’s young people would attempt to introduce some new venture. Such undertakings always withered upon conception. Buck was a farming town and the only shifts permissible were the seasons’.

That evening, of all the squat brick buildings that lined Main Street only the bar showed sign of life with its neon scrawled Jimbo’s flickering through the flurries. A balding Christmas tree needled the entrance, the majority of its radish-sized bulbs burnt out. Worn craft paper decorations made by a Sunday school class years prior sagged from limp branches.

Jimbo’s was slow. Seven of the town’s residents were present, the rain-or-shine regulars. It was a strange night. For the first time in Jesus-knows-how-many-years, Jimbo declared the drinks on the house. The stools were empty as bartender Marybeth poured the whiskey. The others huddled beside the pool table, their voices, at least, sober. A trio of old farmers argued softly about what was to be done. BJ sobbed in the corner booth, knowing that in any other circumstance he’d be getting hollered at for crying like some damn girl. Nineteen was too grown for public bawling.

Ben Franklin, a middle-aged man with an unfortunate name—one so impossible to live up to, he’d never bothered trying—was sprawled flat on his back, still clutching a dented beer can. The front plate of his skull caved inwards—cracked—by the cue ball. His eyes were white as eggs. Gone was his signature smirk, deflated into thin lips drooping under an even thinner mustache. He hadn’t wanted to leave the bar. (At the funeral folks would whisper that ole Ben Franklin would’ve been pleased as pie to have gotten his wish.) He’d been mighty pissed when his boy showed up intending to drag him home. Sure, he said some things, but he never expected BJ to chuck that ball. He hadn’t bothered ducking because the boy’s aim wasn’t worth a damn. If he’d lived, Ben would’ve been a mite bit proud of the kid, though he’d never have said it. It wasn’t in his nature to own up to such things.

That Christmas Eve while snow walloped the westernmost wheat fields and flattened the town’s only contours into a splintered slate, matter converted to energy and escaped Ben’s form. The invisible flecks of heat bounced about the bar, embedding themselves into the pool table’s green felt, the fleeced  bellies of the farmers, and into the liquor-soaked rag dangling from the sink. As night closed up all around, the sky relented. Outside a gentler wind swirled bits of white and knocked the evergreen wreath against the tavern’s door with the cadence of a collector come to call.

Black sky bled out into gray, and visible in the morning pall were two sets of tracks—one human, one canine—that cut down the center of Main Street. The snow renewed its descent. The trail, though heavily forged, soon vanished. Names faded. As did the memories of a man, really no older than a boy, seen leaving the bar one bleak midwinter.  Buck burrowed in the trackless snow, unchanged. A splotch of a town nestled tick-like on the back of a vast continent.

L.L. Madrid lives and writes North of Tucson. She shares a home with her toddler, an antisocial cat, and the occasional scorpion. Inspiration from snowy daydreams and a fondness for dive bars brings you her first publication. 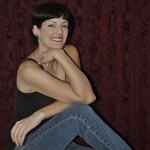