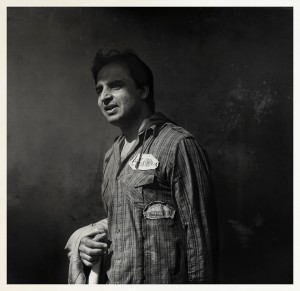 The whine burrows through his ears — in one, out the other — and slips down his arm. It curls around his elbow. It twists around his thick red fingers. The fingers are rough and callused, tiny canyons of cuts telling tales of earlier years, back when these two kids of his didn’t exist. His fingers twitch.

Another cry from one of his kids. He seethes, and even after the paintbrush begins to fall, his hand flings it away. The blood red paint splatters through the grass.

His thick red hands each grab a kid — hands, shoulders, heads, anything to stop the whining.

His thick red hands drag them up the driveway to the front door. His thick left hand lets go of the girl, lurches for the storm door knob.

Finally he gives it all he has, and the door busts open.

His wife is bent scrubbing the floor. He hurls the kids toward her. As he lets go, he yelps suddenly and cradles his hand.

Later, the stinted pinkie on his thick red hand reminds his kids to keep quiet. In an unguarded moment before bedtime, he lets them touch the thick white gauze. They eye him first to make sure it’s OK.

Stanley Dankoski writes from the mountains near Asheville, NC. This is his first story published by a literary journal.