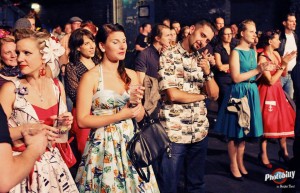 It’s Dravko’s birthday and a drunken crowd of students circle around him at the end of the bar. I’m busy pouring drinks, but not too busy to keep an eye on him. They’re egging him on, and though I’d usually tell them to leave Dravko alone, tonight, the cheering is innocent. Jon Bon Jovi’s, Living On A Prayer, crackles through the bar’s speakers. I’ve asked the owner to remove it from the juke box but he says the kids love it. That’s my point, I tell him.

They want Dravko to yell ha-ya. It’s his thing, ha-ya. Think taekwondo instructor meets Romanian alcoholic and you get a sense of Dravko’s ha-ya There’s a lot of emphasis on the ya and sometimes he slices his hands through the smoky air when he says it. In the afternoons when it’s just me and him in the bar, and I’m reading the paper or doing a crossword, he’ll surprise me with a ha-ya. “Dravko,” I yell back. “Don’t do that. You scared the shit out of me.” He responds with a toothless grin and tells me he’s sorry.

I’ve wondered what Dravko would look like in another life. In a life where he wasn’t an alcoholic for the past forty years. Where he came to school to study physics and instead of discovering cheap, American beer, he discovered something they wrote about in scientific journals. Instead of a few, crooked wood-colored teeth he’d have straight rows of grayish white teeth. He’d weigh a hundred and sixty pounds instead of, and I’m guessing, a hundred and five or ten pounds. His skin would tan in the summer and pale in the winter, not tighten to squeeze out brown mustard jaundice and scale and flake and itch like a reptile’s.

Ordinarily, Dravko would be basking in the attention he’s getting tonight, and it’s the one time a year we allow people to buy him beer. But he’s not reveling. He looks bad and bad for Dravko looks close to death. His cheek bones are the only parts of his face not sagging or sunken. His eyes are a mixture of red and yellow like the red eye he gets when he first comes in- tomato juice with an egg yolk dropped in it.

It’s going to happen, I know and maybe I hope it happens sooner than later. Go out on top. Tonight would be good. Instead of people asking me to kick him out because he smells like rotting armpits, he’s got admirers beside him. Most of them know his story. They know he’s past helping. They know the best anyone can do for Dravko is give him another mug of Natural Light, and that’s what they’ve been doing. Beer after beer is handed to his red, bony hands and like a proud fighter unwilling to stay on his stool for the twelfth round, he rises to the challenge. He squeezes the two pound mug with his brittle white finger nails and lets the golden bubbles run down his beer-burned throat.

Dravko looks sideways at me, and it’s all he’s got to give me a half grin. It’s a knowing grin. It’s the one he gives me when it’s just us in the afternoons. When now that I think about it, maybe he feels sitting there with me is the closest he ever comes to family. That scaring me out of my afternoon daze is his way of fucking with a good friend or a brother.

“Dravko-Dravko-Dravko,” the regulars start chanting. Others join in. Somebody has dropped seventy-five cents on another round of Living On A Prayer. Beer mugs are raising around the bar. This is Dravko’s moment, his retirement party, his going away. Or maybe its his welcome home. Either way. Thanks for all the years of service from the twenty-one year olds not yet born when Dravko first sidled up to this sticky college dive bar. Give it to them I want to say to Dravko. Give them what they want. I guess I want it too.

Daniel Thompson lives in Richmond, Virginia, with his wife and daughter. Recent work has appeared in Bartelby Snopes and he has work forthcoming in Jersey Devil Press and Eunoia Review. 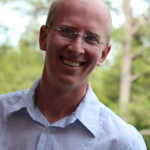