Glorious Nothing by Heather N. Rhodes-Johnson

I looked at my wife, who had stopped breathing for a few seconds. I often looked at the back of her head as we lay in bed together, but this time was different. This time, there was blissful silence. Glorious nothing. I should have been worried, but after listening to her snore for three hours – actually, three hours and twelve years – I was enjoying the serenity of the moment. I tried to stay in that moment, to peacefully slip into a sleep so deep that her racket couldn’t penetrate it, but I found myself concentrating on somehow telepathically keeping her from starting up again. That first snort after her brain had been deprived of oxygen was always the worst, and I knew it was coming.

I stared at the back of her head, imagining as I had so many times before what it would feel like to put a pillow over it. Not for too long; just long enough to keep her quiet. But now she was quiet, and I was wide awake with fear of what was to come. I waited for the snort. My head was held at an uncomfortable angle, but I didn’t dare adjust myself for fear that the slightest movement might stir her from whatever dream had allowed me to have this time of peace. I realized I had been holding my breath.

After a few moments, I had to relax my muscles, to turn my head. To breathe. I did all three at once, as slowly as I could, while keeping my gaze firmly planted on the tangled mass just above my wife’s shoulders. It felt so good to be in a new position and to be surrounded by the comfort of silence that I began to drift into sleep. My thoughts wandered into nothingness. I think I was smiling.

Just as my mind and body began to surrender to sleep, a thought entered my head, and I was wide awake again. How long had she gone without breathing? Five minutes? Ten? I nudged her back with my elbow. She didn’t move. I shook her arm. Nothing. I rolled her onto her back and moved her head from side to side. No reaction.

I kissed her cheek, but she still didn’t move. I turned my back to her and closed my eyes. As I fell into the most restful, rejuvenating sleep I had known for twelve years, I thought I’ll call the ambulance in the morning.

Heather N. Rhodes-Johnson is a graduate student studying folklore. She has been surrounded by creative writers at the University of Missouri for long enough that she thought she’d give it a try, and she thinks she might like it. Her husband assures her that she doesn’t snore. Much. 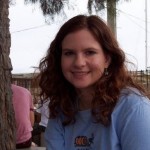