Junkies in their old age tend to take on a reptilian quality. Their skin tightens, their eyes sink in, and they begin to lose the features that define their gender. This is how Doug appeared to Shari as she watched his tongue flick in and out of his mouth while he drew up her shot from the spoon.

She clamped her right hand around her left biceps and began to pump her fist.

“See anything?” she said.

“Nothing.” He spoke with the rig clamped between his teeth. He slapped her forearm lightly with his fingers in hopes of raising a vein.

“If you can’t find anything, I can just muscle it like last time.”

“Hang on, we’ll find something.” He squinted at her arm, adjusted the lampshade for better light, and squinted some more.

“What about that one?”

“It’s dead,” she said. “How about that spot in my wrist? See that blue line there by the scab?”

“No, too tiny. I’ll fucking miss and it’ll hurt like hell when I do. Bend your arm up and we’ll see what’s on the back.”

“This shit is too good, you’ll regret it if you muscle it.”

“How will I regret it if I don’t know how it’s gonna feel? Com’on, I just want to get well.”

“We’ve only got the half gram to get us through the night. Lemme at least try.”

She held out her arm and let him focus on his task. He finally picked a spot, punctured the skin, and expertly maneuvered the point into a vein. When they both saw the plum of dark blood rise up in the brown liquid inside the syringe, he said, “See, I told you I could get it.”

After he’d pushed all the dope inside her, she lay back with her arm folded into her chest and made a warm “mmmnn” sound as though she had just taken a spoonful of healing chicken soup. Doug knew he was right to have convinced her to find a vein. She’d be happy about it later and they’d still have a little bit left for the early hours of the morning. He stood up, feeling almost as satisfied himself.

“Baby, where’re your smokes?” He didn’t wait for an answer. Instead, he began rummaging through the trash that had been piled on the kitchen counter. He found two empty packs and tossed them onto the floor. “Where are they, baby? I thought you bought a new pack this afternoon.”

When she didn’t answer, he looked at her and saw she was deep in a nod, a gentle smile curving upward at the corners of her mouth. She looked so peaceful he decided to take one of the longer butts from the ashtray and light it. He took a few unsatisfying drags and decided it wasn’t going to work. He knelt down in front of her and asked again. “Shari, where are your cigarettes?”

The lips that held that gentle smile were now a light shade of blue. She was motionless. Still as a flower on a windless day.

“Shari? Shari, wake up. Where are the smokes?” He touched her shoulder. Nothing. He listened carefully. Absent was the light purr of a snore he was used to. No breathing. Nothing. The color was quickly draining from her face. She was going out—fast.

“Goddamn it, Shari. Wake up.” He grabbed her by the shoulders and shook her. Her head flopped back and forth like her neck was broken. “Shit.”

It’d been a while since he’d preformed CPR, but he knew how. He had to. He’d learned the skill by necessity and was given plenty of opportunity over the years to practice. He pulled the pillow from behind her back and stretched her out on the floor. Her body flopped down heavy, her head making a dull thump on the hardwood floor. Before he began, he listened for breath one last time, hoping that she’d come back on her own. Still nothing.

He opened her mouth, pinching her blue lips into an oval, and pressed his mouth against hers. He blew, turned his head to see if the chest moved. “Shit.” He tried again. There was shallow movement, but that was just his air going in and out of her. She was as dead as Dillinger.

“Fuck.” He could hear the panic in his own voice. He tried to push out thoughts of what would happen next. The ambulance, the police, an arrest, the inevitability of facing Shari’s mother and trying to explain what had happened.

He blew in another gust. “Com’on, Shari, com’on.” The last thing he wanted to do was give up. He pleaded with her closed eyes. Then, it hit him; he’d forgotten to plug her nose. He pinched off her nostrils and blew in another breath. This time her chest expanded a little further. He kept at it.

Soon she came back. He didn’t notice when exactly, he kept at it after he saw her eyes flutter. She made a small coughing sound, then pushed him back.

“What the hell are you doing?” Her voice was full of gravel, but it still hissed.

“What the fuck, Doug?” She got up, still teetering from unconsciousness. “I fall asleep and you start trying to fuck me?”

Doug was astonished. “I … I wasn’t trying to fuck you.” He wanted to tell her he loved her. That she was almost gone. It was a near-death experience, and it scared the hell out of him.

But before he could say anything more, she cut him off. “Where’s the dope? Did you do that while I was sleeping, too?” She picked up the dirty spoon from the blackened spot on the milk crate. “You fucking asshole, I can’t believe it. You did all the dope?” She didn’t wait for an answer; she hurled the spoon at his head. “You fucking snake. You knew I was gonna be dope sick. You knew we didn’t have enough so you waited till I was asleep and you stole it. You snake.”

Doug, still on the floor, leaned back and held his palms open in supplication. “No, baby, no.”

“Fuck you, you selfish thief. Stop licking your lips. You’re high as fuck, don’t lie. You’re a goddamned snake in the grass, you fuckin’ prick.” Her shouts deteriorated to sobs. She looked at him through eyes fogged with tears and said, “You’re a cold-blooded snake, Doug. Don’t talk to me. Leave me alone.”

She stormed from the main room into what served as their bedroom and slammed the door.

Doug sat on the hardwood floor wondering what had happened. How could you save someone’s life and be repaid like this. Fucking women. Bitches, he thought. He stared at the bedroom for another minute or two. Then, he got up and walked softly to the door and gently knocked. “Baby? Sweetie? Where are the cigarettes?”

Tom Pitts received his education firsthand on the streets of San Francisco. He remains there, writing, working, and trying to survive. His shorts have been published in the usual spots by the usual suspects. His novella, Piggyback, is available from Snubnose Press. Tom is also co-editor at OOTG’s Flash Fiction Offensive. His new novel, Hustle, is out on Snubnose Press April 1st, 2014. TomPittsAuthor.com 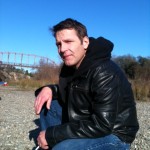