The Driver by Kate Wisel 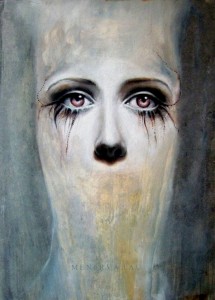 Call your mom (the woman who borrowed two-thousand dollars from her boss’s wife so you could have this car) and tell her you won’t be home tonight. Speak in exaggerated Russian, so she’ll maybe understand. Start the ignition to the Intrepid outside English High. Cut the defroster while Raffa clicks the front door open and Serena climbs in the back, the seat like a couch from the seventies.

The snowflakes that pick up outside are slow to fall and pretty, don’t kill them off your windshield yet.

Wait till Raffa pops the DC and lights her 100 with the back.

This is how Friday feels, driving slow down Turner St. so you can cackle at the junior girls who wear North Face jackets and Tiffany bracelets, the staleness of the smoke mixing with crisp air from the crack in the window. Glance in the rearview before you tear off, noticing the way the light assaults the silver on their careless wrists.

Drive through the ghetto, or that’s what Serena calls it, past the MSPCA sign and the bus stops and the Dominican barbers who sit in front of the windows in folding chairs no matter the weather. Turn up the new mix you made. Sit transfixed at a red light as the three of you mouth “Murder She Wrote,” lightly dipping your shoulders side to side in a wicked trifecta.

You don’t have to look to see the barber’s attraction to the humming vibration of your vehicle, how they stand on the corner to imitate your moves with their hips, their hands in the white air with picks in their heads.

Know that you are ghetto girls; that you don’t give anything the time of day unless you’re down to fight. Drive away with a secret eye in the rearview, with Serena leaning forward in the middle seat, her arms outstretched like she’s flying.

Get to Dorchester in no time. Snap at Raffa to put out her cigarette. Don’t admit you’re nervous; that you feel your fake ID will jump out your back pocket unannounced as a fish in open water. Stay in the car and observe the street.

In Dorchester, you are not ghetto, no matter how hard you do or don’t try. Here, the shootings make newspaper headlines in The Globe, the newspaper you read aloud to your mom who hates to read in English. Here, drive-by’s and homicides don’t rhyme like lyrics on your mix. Click open the door and become slow motion in a music video featuring you. Here, the brightness of your skin from creamy CVS foundation is only a distraction.

Step over the glass on the sidewalk, not from beer bottles but from busted up windows and eye Serena, who could easily give you away if she keeps redoing her ponytail; a neon green elastic in her teeth.

Don’t recognize yourself, the way you enter the liquor store, the delayed blur of three bodies on the surveillance. You’ve left your coats in the car, and the tightness to your t-shirts make the outline of your hips look like Coke bottles. Finger the cash in your hand, soft as flannel, as your mother’s pajamas when you were small enough to climb in her bed. Keep your backs to the clerk who stretches over the counter like a cat, blowing wax off a scratch-ticket.

Leave the liquor store with a thirty over your shoulder, the snow falling hard now like confetti. Start the ignition with wild flakes in your hair and pop on the headlights because it’s just getting dark.

Place the thirty under Serena’s shins who tilts sideways to laugh in the back. Last week, in this same parking lot, you were busted by an undercover cop. He had a thick Boston accent like in the movies, which only meant he was from somewhere outside of Boston like the North Shore or Revere and that you could match him in nerve and in silence.

Zoom out the lot, your mouth open in reverse. Give the finger to the curb you sat at for two hours in the cold, lined up from each other at a distance while the cop asked you individual questions you couldn’t answer like where are you from and what’s your father’s name?

Crack open a beer and hear the hiss in your heart. Your ex-boyfriend Carlos taught you to drive. He slouched back in the seat with one arm hanging over the wheel and the other over you. Drive back to JP in the same fashion, with freezing PBR’s in the cup-holders, your one free arm around Raffa. The thing about being ghetto is that toughness is a kind of love. Circle the loop around your high school for the fun of it, your tires sloshing puddles and spinning out on residential streets.

Drive up the hill and park where the ivy-covered houses sit tighter together. See the roof of your high school and into the gym whose lights stay on throughout the night. Don’t think about last year, or next year, how college moved towards you then broke apart like an iceberg.

There is only tonight. After you drop off the girls you will drive out to Waltham to see Carlos’ new apartment. Ice will crack off your windshield on the highway. Wonder the whole time what Carlos has to say.

When you wake up in Carlos’ hoodie, the two of you will smoke cigarettes on the porch. You’ll spot your car, illogically parked in the next complex over, though you won’t go anywhere for a long time.

For now, stay huddled in the car. Keep your sleeves over your fists and hold your hollowing can in between. Take elongated gulps, only feeling the freeze of the spill after it sops into the puffy layers of your jacket. Let carbonation fizzle in the pit of your stomach like Rice Crispies.

Feel the distance, no don’t, between the empty seats of the stadium in the gym and where you’re sitting now. Don’t feel sentimental, but when you do, stumble out the front seat and find your footing in the mounting snow around your tires, pissing in the glare of the headlights.

Kate Wisel is originally from Boston. Her fiction has appeared in The Drum, Bartleby Snopes, Corium Magazine, SmokeLong Quarterly, Fiction Southeast, Compose Journal, Mad Hatters’ Review, and her poetry in DecomP, The Altar, The Blotter, Philadelphia Stories, Neon Magazine where she was nominated for The Forward Prize, and on Boston’s subway as winner of the “Poetry on the T” contest. She was awarded the Keach Prize at The University of Massachusetts Boston and earned a scholarship to the Wesleyan Writers Conference. She is a fiction MFA candidate at Columbia College Chicago where she teaches undergraduate writing and rhetoric.