Dress in the Bush by HC Eversole 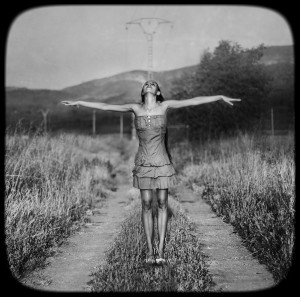 The weekday is well into its arch. People have had lunch. Day shifters begin to count time. Night shifters are readying themselves with resistant yawns. Midday nap-takers lose themselves in absurd dreams. No one has time to pause and consider the young woman ambling along the town’s bike and hike trail.

Well, no one except for those that pass by her. The avid recumbent cyclist gives her a long stare. “His belly’s too fat for a tight jersey,” she thinks. “Cycling is for lazy people.” The dog-walker quirks a smile and says, “Howdy.” She smiles back. “Who says howdy?” She thinks.

The early summer air is thick with humidity and the snow of cotton wood blooms. She compares the air to breathing through a wet sock. As she passes beneath the branches of a young blackgum, she catches a spider’s silk line across the face. She pulls it away in a comic haste. Beside the bike and hike trail trickles a grassed-over creek; that which a mile away flows into a water-filled depression. A depression that has local geologists concerned as it continues to depress and imperialize the surrounding land for its shoreline. The young woman walks to the depression, called Trunley Lake, because she has never seen it, and today she wants to do something she has never done.

She chooses to do such today, as she remains in the same clothing she wore the night before. Her clutch with wallet, cell phone and keys – the holy trinity, as she overheard someone call it, were absent from her pockets. And seemingly, from her life. When a woman wakes up from the night before and without the holy trinity, well, she’s free. Temporarily, anyway. The new sense of freedom propelled her to wander the bike and hike trail to Trunley Lake.

The night prior, he wouldn’t stop talking about it; at the big table in the bar or in the kitchen of the house party – even in the empty classroom; before she undressed and he just unzipped – about Trunley Lake. An old farmer, whose land the lake is overtaking, patrols his part of the shoreline with a shotgun and a loud mouth. He claims ownership over the lake, the lake steward perhaps; but one can never really own such a thing as a lake. Especially one that is growing. He said the old farmer never dares to enter the lake. It’s odd, he said. It’s like he’s afraid of the water.

“I’m sitting out there one morning, in my waders and a holding line, and the mist rises from the water and curls around the dead tree trunks like a serpent. Like a boa attempting to squeeze the bare trunks in half. It creeps toward me like its figuring me out. I know it’s just mist, but it feels alive. I think I hear whispers when something hits my leg, I jump, yell and turn around and it’s a floating cooler. I bend down, open it up and it’s full of unopened bottles of bum wine. Then the old man pops a shell into the air from across the way and yells at me to ‘git goin’.” So I go. Never went back.”

“Dumb story,” she thinks. Last night, when he told the story she hung onto his words the way a new girlfriend might when she wants the other listeners to believe his story to be important and meaningful. “I’m so green,” she thinks. “He never wanted me for a relationship. Prick. What kind of man leaves a girl with other men she doesn’t know, anyways?”

She stops trying to recall the night prior. It is useless, and at this point in her life redundant. She thinks instead of herself, a person, a biological entity, miniscule in size compared to the colossal entities of outer space. Crashing into one another. Absorbing. Imploding. She is merely a tiny human being, walking barefoot over a short distance of hot blacktop trail along the crust of Earth. She imagines a pebble-sized, rocketing asteroid picking her off. Destroying her and sending her pieces floating and lost until an orbit around something greater is found.

Another dog walker approaches, this one a man with an active black Labrador. He is staring at her behind cheap sunglasses, as his Labrador heads its snout into her crotch. She stops, embarrassed and angry. The man makes a weak attempt to pull the Lab away. “Sorry,” he says. “He must like you.” “That’s what it is,” she thinks. The man continues to stare at her, she can see his eyes pointed down both at his dog and at her ass. Her jean shorts are devastating, she knows. Her mom hates them. The front pockets hang below the frayed edge. On the back end the bottom cusp of her buttocks peaks out. She wore them last night to go to bed with him. Had she’d known the future she may have worn something more sensible. Her mother saw her in the shorts once and told her to put on something less ‘rapey.’ She hates her mother.

She walks away from the man and dog, pushing its snout away repeatedly. She watches him continue to stare at her, as if, in his mind, prolonged glaring leads to immediate sex. She wants to tell him to fuck off, but turns around and walks, deciding that letting him stare at her walking away will be punishment enough. He could never see a girl like her with the shorts off anyway.

As she approaches Trunley Lake, the bike and hike trail gives way to a dirt path walled in by bush and tall grass. She pushes branches away from her face and flicks bugs from her bare arms. She steps into a little mud puddle and exclaims a gasp as the mud fills between her toes. She wipes her foot with a leaf from a young linden tree. As she braces herself against the linden’s trunk she sees something peculiar. A yellow floral dress hangs limp astride the branches of a common serviceberry. With a belted waist, pleated skirt and a ruffled collar, it looks to her as a dress plucked from a 1955 clothesline. Below the dress, a pair of polished red patent leather low-heeled shoes lay side by side in front of a buttonbush.

“Well I have to put it on,” she thinks. She drops her devastating jeans shorts to the ground and lets the dress tumble over her limber frame. She zips the back to a point below her shoulder blades as she holds her hair, like a rustled stack of browned lamb’s wool, in a pile atop her scalp. She lets her hair collapse as she slips on the buckled shoes. She struggles to pull them over her feet; a squirrel watches her hop around as if she were readying in haste for a Monday morning workday. “Am I being set-up?” She thinks and looks around, possibly to find snickering jokesters hiding in the brush. When no one is seen, and the only laughter are the calls of the whippoorwill and woodpeckers, she walks to the edge of Trunley Lake.

“He’s such an asshole. I’m not showing up for his class the rest of the semester. He has to give me an A. I’ll go to the police tomorrow, once I find out who those guys are. Assholes.”

She backstrokes into the lake. She watches her red patent leather feet scurry up and down in the water. A cold pocket of lake water shivers her skin. Soft little tubular ripples surround her and disappear in collapsing wavelengths. Behind her, what seems as distant as a skier atop a peak, she can hear the echoing vulgarities of an old man. She closes her eyes and feels as though she has just pressed pause on the rotation of Earth. She has disconnected herself from the myriad particle and molecular bonds that bind her to All Else. Humanly bonds, the faint tidbits of stored memories, the heart rope-tugs of emotions, vaporize as she floats further along with ease into the limnetic zone. “His damn class vocabulary. Limnetic zone. Littoral zone. Words I’ll never use again. He can drown in a lake for all I care.”

As she opens her eyes, and the pause button releases, the water darkens and she senses a bottom below her that may continue for miles.

“This lake is strange,” she concedes. She swims to the shore and takes to the path for the trail. She stays in the dress and the red patent-leather shoes, thinking that she will now have a better story to tell about the Lake then he.

Sometime later that year, as townspeople still continue to move about, a wind shakes free lakeside leaves and loosens a tag from the common serviceberry’s branches. Typed, it simply reads, “Leave here.”

HC Eversole lives and works in Indianapolis. His boots are muddy and his back hurts. He’s a working man, who probably works too much. He escapes, briefly, into his imagination for the time it takes to tell a story. 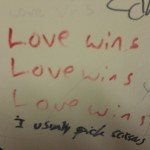