The Depraved Ringmasters & Waking the Somnambulist by Paolo Cornacchia 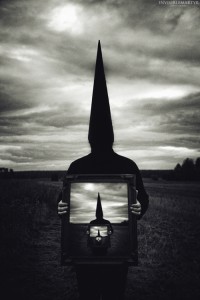 Consequently given powers integral to ourselves, what if the warranted noose were tied with finality, duly reapportioning the milk mass?

Brilliant sheen to the day, clouds drifting over Altiplano.

Frantically, as the cigarette glows, orgasm fast approaching, much like a Saturn V, by happenstance a human(e)-rated expendable rocket.

But not like an N1, the heavy, heavy lifter.

And not as Che would have intended.

In order to make a point. Consequently fetal.

Sorority sisters, churning butter, endeared to it, absorbing sallow political inclinations, slightly left of center, lest their tenures be in jeopardy, unexceptionally juxtaposed to paternal suburban claptrap, scream as if a Munch, and the resulting dissonance, a triad of existential malaise, a coverlet of anxiety, so much so that our protagonist suffers an epiphany, Gandhiji in mind.

Full of malevolence and excessive pride. Full of self-indulgence.

Proceeding into a pit of self-glorification, a fat woman’s girdle, slabs of effervescent fatty acids overflowing with morbidity lest they be remiss in professing ignorance.

Awake. Sheets like a gale, room silent and still.

A mass of brains.

Forgive her, Saturn(ine), naturally nodding sagely, the outcome definitively assured and, as she marches forth, knowing full well that the outcome will be good and a bounty to humanity.

“Husni al-Za’im is my friend.”

“Carlos Castillo Armas is my friend.”

“But not Fidel Castro.”

“Joseph Mobutu is my friend.”

“But not Ngô Đình Diệm.”

“Emmanuel Kwasi Kotoka is my friend.”

“But not Salvador Allende.”

“The Contras are my friend.”

“We might want to send in the snipers, sir. The 7.62s, too. Perhaps a drone or two for good measure. Sarin, if the mortars aren’t effective.”

Superstructure, deliriously fêting, the cause all but assured, eighteen forty-eight and nineteen seventeen denied. Pontius Pilate in the Oval Office and, under Capitol dome, basking in the gilt boardrooms of their vapid minds, senators and congressmen stained with the afterbirth of prostitutes.

Pennsylvania S.E. jammed in all directions.

Che at the helm and Gandhi at the wheel.

Bloodied collars uglier than the day they were born, laden with the suppositories of super PACs.

Exalting the day their mothers shat them out.

CIA Director also accounted for, having donned a Mickey Mouse mask lest he be recognized by those who might want to return the favor of torture. Grand Imperial Poobah in a celebratory mood, a thousand saints having not already cried voluminous tears repeatedly and profusely as a consequence of the despicable acts of narcissists.

For Ten Thousand Men of Harvard ever more frantically parsimonious with the desire to share the plunder of success with indigent brothers and sisters.

Shiny epaulettes. Television cameras rolling with haughty skeptical authority, peppered with commercial interruption, coffers sure to be overflowing by next fiscal quarter.

And nowhere to turn.

Kettle filled with water. Kettle set upon a gas flame. Cigarette lit and match extinguished under running water. Outside, a mallard, disassociated from the estuary by a thin strip of fecund land.

She has entertained ablutions.

Archimedes has applied the method of exhaustion, too.

Having sailed into the Gulf of Finland, verisimilitude tickling maudlin keys. A harmonium nestled within The Church of Our Lady of the Many Facets. Verily, verily, July or perhaps August, the sun wilting weeping faces whilst Stalin lies unresponsive within the Kremlin Wall Necropolis.

Now that is not to say that one is devoid of resourcefulness. A job as a secretary. She might do many things, although she doesn’t quite know how to type an important piece of correspondence. If only the keys were in alphabetical order. If only someone had explained the connection between herself and others.

The shuffling of feet.

A kiss on the cheek.

Proceeding over a byway until annunciation, beckoning new arrivals to be resplendently aware.

Aware! So fundamentally aware, as her husband has purportedly not been the vector responsible for ruining her life.

Then off to the races. She is the horse, extraordinaire.

Finches nesting. The past has cast a morass, this morning quite certainly commencing festooned with dread. And dreadful beginnings generally have dreadful endings, n’est-ce pas?

She sits alone in the kitchen. Has she heard something crawling in the attic? The house “settling” or perhaps it is she who has “settled”? Regardless, it is all quite unsettling. It is all quite je ne sais quoi. Because she has made her bed and now she will acquiesce. She will lie, supine, fall soundly asleep, never waking evermore from her everlasting coma. This begs the question: Might she, despite infinitesimal odds, navigate fragility itself through the insufferable inferno? Might she have the desire to?

The answer would be in the affirmative. The answer is universal. Consequently, seek, post haste, a made to measure answer, wherever it may lie.

(Never relent. Because if you do, you will not wake.)

Drawn to a place her husband might never inhabit. Because he is quite dense.

Like a neutron star, he spins quite violently. A pulsar.

And there is verisimilitude.

She is now as black as obsidian. A veneer quite like quicksilver. A reflection to die for. And as sure as can be, as Lenin might have been in the past. As sure as you may have once felt the need to rest assured that life is long and incredibly, incredibly necessary.

The phone is ringing. Or there is a knock at the door. Who is to be sure, or sure enough? Nevertheless, she rises to the occasion.

School doors. School bores. Playground awash with life. Cantankerous, pondering children. Daughters ringed by flowers that empower by the hour. And as they are wont to do, mothers recoiling, naturally terrorized by the notion that they might lose their darling, darlings.

“When is Daddy coming home?”

Paolo Cornacchia lives a bicycle ride from the Chesapeake Bay. He has been writing for a number of years. He is a web developer by profession. 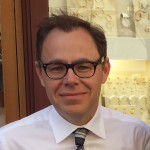