Death is Dying for Those Who Wait by Lesley Weston 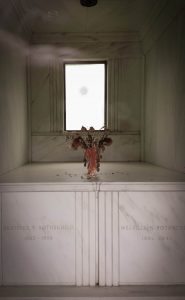 I dream of being buried in your garden, sweet loam and flowers from another time. You are by a window, watching the wind ripple the grass above me. These dreams have the feel of spring, of summer-without wet feet, without mosquito bites. Do not wake me if slumber takes me. My dreams are fragrant, and in them you are close.

We studied under the same teacher, who forbade me from reading your work You will ruin each other, she said. Love will only steal your voice, and break her heart.

The game is simple, spin the bottle, he said. Whoever it points to has to cut off their right hand. If it points to the same person twice, they have to cut off one foot. If it points to them three times, one of us has to kill them. We’ll draw straws for that. I spun the bottle twenty-five times, and, every time, I lost. At the end of the evening the floor was littered with hands, and feet and the two winners were chilling in the freezer, one of them that evening’s host. The bottle was full of Age of Innocence Cognac. I drank it on the way home. It was good.

My mother always told me, must always stand up for the truth. I was not one of the kids who said the bad thing to the Vice-Principal, even though he was a creep who had no business hanging around all us little girls during lunch in the school yard. When I was pulled out of class in the middle of the math final, and suspended, Mom picked me up and took me home. In her buttercup yellow kitchen, she stood looking out the window, not at me, and she asked why I had said such a terrible thing. I told her I hadn’t. I told Mom I was just standing there with my friends, arguing with Moira about The Man From U.N.C.L.E, because she said she was Robert Vaughn’s biggest fan, not me, and anyway, I wasn’t allowed to have a crush on him because she said Dibs, and she was going to start a fan club for him, to prove her love. And that’s when creepy Mr. Elliot interrupted Moira. Do I get a fan club, too? And Moira said, Yes! Jennifer will start an I Hate Mr. Elliot Fan club. And Jennifer said, I Hate Mr. Elliot! I am his biggest fan, and I am going to start a fan club to prove it. I didn’t say anything. I swear. My mother made me apologize to Mr. Elliot the next morning, so I could go back to school.

I curl around my dog to keep warm. It makes him too hot and he gets off the bed.  I get out of bed and sit down to write in my ratty, terry-cloth robe, I do not light the Camel Straight between my lips, but hold it dangling from the middle of my mouth as I type. When I am finished, I get up and drink two glasses of water, so my old lady bladder will wake me early in the morning. The electrician will be here at 8AM. He will install light fixtures everywhere a bare bulbs hang from the ceilings. When he is finished, I will drink my black coffee and light the cigarette that kept me company during the night, and I will feed and walk the dog who wanted too but got too hot.

What is my number:

I am rubbing his legs, I have been rubbing some part of him for two months and twenty-nine days. My own legs are swollen like tree stumps from standing beside his bed. The machines whisper to me, as they record his oxygen levels. Across the bed there is a dark shadow. It holds a silver ewer in one hand and gestures for my hand with the other. I let go of his leg, his oxygen level lowers two points as I reach across him toward the figure holding the ewer. The ewer tilts toward my outstretched hands. Something shimmy drops from the lip of the ewer. His eyes pop open, he claws his mask askew and he says, what the hell were you doing? I wave my fingers in the air, like saying toodles to a dear friend, and brush away  the figure across the bed away. I saw something sparkling, must have been the monitor blinking, I say. As I re-adjust the oxygen mask over his nose and mouth What is my number, he says. 79, I say, and start rubbing his leg again.

The light changes, and I step off the curb, in a hurry, hurry to get home and feed and walk the dog.  I have twenty-five minutes to get back before- I fall asleep on top of the broken white line.

Lesley C. Weston lives and writes on a sweet meadow surrounded by surly trees. Her stories have appeared in A Capella Zoo, Cake Train, Narrative Magazine, The Mac Guffin, Opium Magazine, Per Contra, Molotov Cocktail, EllipsisZine, Reflex Fiction and Smokelong Quarterly, among others. 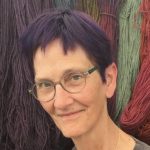