In a Dark Wood by Emily Koon 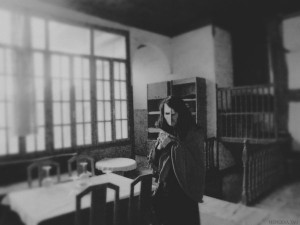 In the lost children stories, the children make it out alive. They save themselves. There’s a thing in them that’s just as dark maybe darker than what’s trying to eat them, and they find they can cook and eat someone, that it’s not hard once you know how. Also, people taste a little like pork.

At least, this has been my experience.

When Jess shoves a corner piece of the house into her mouth, I warn her appearances can be deceiving. She says when do we ever get to eat off a gingerbread house? Also, we’re starving.

“I never cared for gingerbread, myself. Too peppery,” I say.

“This is not the time to be persnickety.”

My stomach is growling for something salty that had a face once. Jess hands me a gingerbread man from the yard, the closest thing we have to a burger.

I wouldn’t drink the water. I wouldn’t suck on the tall red grass Jess found by the pond that made her mouth look like she’d bitten someone. She claimed it took the edge off the hunger, but I said the edge would come back.

Three days since we left home. We still don’t know why the Councilors came with the bombs that made everyone hit the ground, clutching their eyes. We don’t know if anyone’s left. When I heard the boom in the town square, I ran into the Walgreen’s and got Jess. She wanted to run into the library and hide among the stacks, but they gassed it, too. We’ve been lucky through this.

“Eventually the pendulum will swing back the other way. We have to be ready,” Jess says. She believes the universe has an intelligence, rationing out fortune and misfortune to keep everything in balance. Our good luck streak, if you can call it that, could run out any minute.

I can’t argue with that. I bite the head off the gingerbread man, and that’s when I see the woman at the window, watching us. She’s been there this whole time, listening.

I almost don’t see her because her face nearly recedes into the dark room behind her. She’s all eye sockets and cheekbones, like she hasn’t eaten in a while either, which seems unbelievable given the circumstances. I think maybe she’s just lonely, that the way she’s looking at us is a different kind of starvation. It’s easy to see her luck is long gone.

“She lives inside food,” Jess whispers, but the woman’s ears are sharp from living in the woods. She comes outside, makes a corny joke about eating herself out of house and home.

The icing was laced with something, but Jess seems okay. She chats the woman up, searching her for weak spots we can use if we have to. It’s how she rolls. She acts interested and people buy it so they’ll tell her anything. It’s gotten us out of some jams. I feel like I’m listening to Jess and the woman underwater, their speech warping and swimming away from me.

The woman’s name is Beryl, a weird name for someone who wants to eat you. A lot about this isn’t as it should be.

“I use the microwave. Lean Cuisines and stuff mostly,” Beryl says.

Jess gets a few nuggets out of her. Beryl was a journalist in the legislative district, back before they started rigging the elections. She quit because she felt like she was feeding the beast, helping drug the masses with information that didn’t empower them.

That doesn’t sound right. Witches don’t have careers, concern for the working class. I’d sort it out, but my brain’s a thick soup from the roofie she slipped me. After Beryl has swirled her fingers around in it, she licks them all clean.

Beryl’s got a gumdrop patch out back. I don’t know if it’s there or a hallucination brought on by the gingerbread, but the two orange drops Jess has in her arms look real, the size of jack-o-lanterns.

“Take as much as you want,” Beryl says, licking her lips. “Stay as long as you like. My sweet girls.”

I can tell Beryl’s been alone for a long time. Her eyes are wide and hungry for us, like she might eat us if we try to leave. Misery kind of thing where we’re she’s Kathy Bates and we’re James Caan only for now we got legs we can run out of here on. When Beryl goes in to heat us up three Lean Cuisines, I tell Jess we gotta book.

“She wants to eat us or make us wear baby clothes and call her Mama or some bullshit.”

Jess’s arms are gumdrop heavy. Around us, the Black Forest cricks and groans, the thorny vines snaking out of the trees as whatever’s in it closes in on us. I think Beryl’s connected to the forest somehow. It must be how she hears, how she knows what we’re about to do.

There’s a story about a witch who lives in the forest. Nobody believes in witches now, but they still don’t go beyond the edge of the farmland, even to go after a lost sheep because in the story the oven doors are wide enough for a grown man. What do you lose by playing it safe?

“If we screamed no one would hear,” I whisper as softly as I can, so the forest can’t leak this to Beryl. “If they heard, they wouldn’t come.”

Jess drops the gumdrops. They roll down the hill like rogue pumpkins and disappear into the trees.

“I’m not leaving. Screw that old bag of bones,” she says.

I didn’t mean for Jess to hurt Beryl, not like that. We could have taken our chances in the forest, knocked her out and stole some food. We could have seen if we made it out the other side, where there had to be help waiting.

When I saw the body on the kitchen floor, Jess had already removed its clothing and sliced off its fingers and toes.

“She didn’t put up much of a fight,” she says, like we cut in front of her at the supermarket.

We dig a pit out back and roast the body and move into Beryl’s house. Jess carves her up like a Thanksgiving turkey. When we’re done eating, she puts the fingers and toes in a sack and buries them under the gumdrop patch. Every night when the moonlight hits it, I listen to the forest listening to me and think I see hands coming out of the ground. Trying to claw their way back to the world of the living. After a few years I stop seeing them.

Jess makes me a Lean Cuisine and a hot chocolate, rubs my shoulders and says, “See? It was easy.”

At some point she makes a sign at the edge of the forest that reads What you’ve heard is true. We cooked and ate an old woman. Her name was Beryl. I tell her it’s in poor taste, but no one’s ever followed us in here.

Emily Koon is a fiction writer from North Carolina. She has work in Midway Journal, Portland Review, Atticus Review and other places and is the winner of The Conium Review 2015 Innovative Fiction Contest. She can be found attwitter.com/thebookdress. 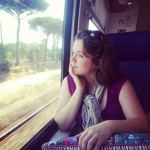