Ekphrastic poetry, painting: the answer is the disaster by Eric Piper

She was the kind of girl with werewolves for bones,

she was born hard wired for battle,

mouth full of gristle and fight,

the way knives imagined her mouth to be,

she collected ridicule in fresh bandages,

named them after oceans,

the trick was to swim,

her skin could not be broken in the name of pretty things,

infinite ugliness burned into the feet of happenstance,

in the smell of flesh on fire-

found a new sort of religion that worshipped her beauty and rust.

Been Under Too Long

I have been writing suicide notes in my head for months;

Making arrangements so nobody would miss me.

Used to letting unworthy voices under my skin,

my heart declaring death upon my sleeve,

it has become too heavy,

so close they think they understand me.

All mouths-they tarry against me, because I have let them.

I have been writing suicide notes in my head for months;

been plotting, planning, and making arrangements.

I have been making arrangements so nobody would miss me.

I have been writing letters,

giving things away in all of this planning.

All of these things have kept me low-

low enough to feel the fish feeding off my eyelids.

I have been writing suicide notes to be delivered

I wanted to kiss Sylvia, kiss her-

rock her to sleep, both of us to find peace.

I had been writing suicide notes for years.

have been writing me.

Drunk enough to know I should not have been driving,

not driving on the highway into the city,

not driving into the side wall of the highway

on my way to the city,

on my way home.

Driving drunk on the highway into the city.

Something in me did not want to make it home,

I made it home anyway.

I made it home,

it was quiet, my cats still loved me,

and Chuck told me I wasn’t worthless.

I don’t think he knew how much that

I don’t want to be someone that needs

to be swallowed by dark things about me,

there is light waiting-there HAS to be light.

The sky has been caving into my head,

I have been writing suicide notes for months,

to be delivered in February.

My mother would hate me,

my mother would scream at my grave if I left.

I cannot stand it when my mother cries, it breaks me.

I do not want my mother screaming at my grave or

I wish would make it home-because I wanted to.

I cannot stand it when my mother cries, it breaks me.

Mama told me once that my great aunt

dressed her kids in potato sacks,

chained them up in the back yard and fed ‘em dog food.

Mama was confused when her

father sold his own children born

Tightened the noose around mama’s

it was the only way he could

killing a seed that would grow in

China doll daughters that would panhandle

for a mother’s love in any bedroom that would listen.

A son met with a song,

searching for his own chance at heaven,

A god that often forgot,

Jennifer E. Hudgens, originally from Oklahoma City has been published in some stuff and is currently pursuing her Bachelor’s degree in Creative Writing at the University of Central Oklahoma. She thinks life is poetry if you’re paying attention. Jennifer watches the sky the way most people watch television. She has an unmatched passion for poetry and a wickedly sarcastic sense of humor. She is terrified of clowns, horses, and animatronic toys. She genuinely hopes you enjoy her poems. 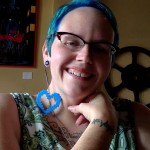