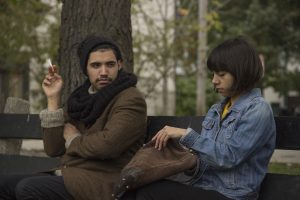 There was once upon a time when Juana’s mother was a person. She walked down the hall, she ate her dinner, she made jokes about sex. This was about a year ago, roughly. She was living in Santa Fe, and she was well-known to the arts community. She painted the landscape, she shopped at the market, she pruned and trimmed her apple trees, she yelled at the neighbors.

Juana wakes up every morning at 7, the perfect time for cigarettes, black coffee, and loud music in her ear-buds. She works as a bilingual aid at a local Spanish immersion school. Yesterday, she slept with her supervisor for the first time, an event which, despite its illicit nature, was not wholly surprising to Juana. She had always been pleasantly disturbed by the supervisor’s effeminate demeanor, his propensity for intellectual terrorism and “other” methods of intimidation; most of all, however, she was pierced by his highly structured sense of perception. Of course, this can only be understood as a paradoxical consideration. Perception, Juana had once thought, was the sensation of all that was interpreted by various centers in the brain, all that was pierced in through the eye-organs, the fractalled spirals of the ears, the film of flesh, and the laid in pipes of the nasal cavities. And yet, it was so: the supervisor perception pierced, like a cunning fox through an oil hallucination, or, as was more appealing to imagine to Juana’s sadistic sensibilities, like a surgical scalpel through the quivering insect of the clitoris.

Shortly thereafter, Juana became obsessed with the supervisor, and suffered like a good girl for awhile. The supervisor had once had a wife; she was gone in her skirts and brunette twirling, leaving him alone with a few paintings and a garden and a stove and a case of mezcal.

Juana met him for tea once, after the initial encounter, and he seemed so small, his dark irises without the sick-milky horizon beneath them, and his hair dark and his slink so assured and too beautiful to be a man’s, or a critic’s, or (most of all) a lover’s. She understood everything, or at least, she had once thought she did. Confronted finally with a hopeless romance, things sank away, the silt stirred, the tea seemed as if it had always been cold, the clunk of black shoes against the floorboards, and out the door.

After she left her job, Juana had little choice in the matter. She was at home most of the time, having dreams about Che Guevara, the comrades, growing vegetables in the garden of an old couple, sexual misconduct and Professor Snape, and the purchasing of very high-end doll furniture. When she could fall asleep at all. Most of the time, she was unable to conciliate rest—was the bed too hard? Probably not. Was it all those plastic glow-in-the-dark stars that infected the ceiling, a horrible pleasantry of adolescence? She was at home. She did not have great nights.

Too many times she had tried to slip her little dreams into the daytime. Each time that she had become obsessed, it was a sign of impending failure or the harbinger of a period of madness. Reaching for the reins of control, Juana became a great singer of classical country and Mexican rancheras. She performed in each bar in Santa Fe, with a guitarist who was in love with her but in no way could tempt her passions.

The voices she sang in were like Emmylou Harris’s ethereal veil between gravel road and raven; Lola Beltran’s rich largeness and assuredness of gesture and drape; LeAnn Rimes’ unreality, and Hank William’s alcoholized and crazed remonstrance against his own young death, which of course, he must have predicted after the first time he had an orgasm, or wrote a song, which for our purposes is the same thing

And so, Singing and the singing of dreams. She met other people. Juana seduced them. Juana taught them to believe in her intelligence. Juana rented a new room in Santa Fe with a doctor and a woman who worked for the county and road motorcyles. It had been several months and still, no sign of the supervisor.

There was a bar she frequented in her tempestuous loneliness where people danced to smart cover bands, to the beat and shimmy of some good disco, some Michael Jackson, and Lady Gaga. All about her gleaming brightly in desperation and exaggeration, throbbing around the room, held by the eyes of so many visions. Yelling around herself she would become cold and tired before the night was over. To go home, then, and stare out the dark corners, to sweat in her flannel bed-clothing and swallow glass after glass of water of which her vaguely goitered throat could not be sated.

What had happened, what she had wanted to happen, was to explain to the supervisor how she would like to ingest him, to spit him back up all virginal and slimy and naked and then fuck him again like a spider and then inhale him like a cigarette and then exhale him like a poem to be published in a book like a bee spewing honey in a honey comb, to gorge herself on the honey like a bear, his waxy stickiness on her face and hands and fur, to hibernate in a cave with him safe in her fat for the whole of winter, to sleep with him inside of her, like two humans fucking each other in a great, never-ending trance.

The mother spoke in strange sentences about Jesus, about Russia, about a man named Chris for 5 months. She refused food and would not walk and yet she sat up in bed and cried for help. She said that she had been kidnapped; they were torturing her in her own home. She needed to leave, but could not navigate the stairs.

After she had applied to 20 new jobs, Juana noticed that an advertisement had been put out for her old position at the bilingual school. The job description, to her knowledge, had not changed in the slightest. She sat and thought about what she might do for a moment, and then she sat to work hard, lurched over her computer like some manufacturer of miniatures, the arthritic brittleness of intention, the slavered shoulders, the dry warmth in the corner of her throat it could not be reached by the water.

Two weeks later the supervisor and another administrator were looking over applications for the position of bilingual aid. There were 5 individuals of interest. The first candidate, stated as being 30 years old, had studied at Bard College before moving to Mexico where he was married to a professor of literature. They had recently returned to the United States—both were looking for stable employment.

The second candidate was an art student from Mills College out in California. A recent graduate, she had designed and created a tortilla machine, which was to be called “artist, “purposed towards the confection of portraits of each student of Central American descent at the college. On the day of presentation, the attendees were invited to eat the tortillas while she gave a detailed presentation of the design and building of her strange invention: it stood over 20 feet tall and was made mostly of copper, wax, feminine hygiene products, and brass. After graduating, she explained, she had taken the machine apart and donated the materials to a local foundry that produced “contemporary” sculpture, mostly for outdoor display at wealthy homes around the bay area. To her knowledge, at least part of the materials used in her project had been destined towards a pornographic buddha nestled among the bougainvillea in the lush garden of a prominent and well-respected journalist.

The third candidate was from Ukraine. She spoke 7 languages fluently, including Spanish, and had worked at a hospital in Chernobyl as a nurse for over 10 years. Her reasons for having recently moved to the town were at best vague. Under “Special Skills” she had listed the following: Adobe Illustrator, Microsoft Office, internet, computer repair, necromancy, expert knowledge in the ways of the “lost wax” casting method, and speed-reader.

The fourth candidate was a 22-year-old male journalist interested in bilingual education in America. He studied abroad one semester at the Universidad Austral in Chile, majored in English and Journalism, and was looking for a part-time position to finance law school.

The fifth and final candidate did not possess a particularly impressive educational record. She was a retired member of the Falange Espanola de las Juntas Ofensiva Nacional-Sindicalista and claimed to paint “pet portraits” at $10.00/square foot.

It would be difficult to describe the scenario that ensued on the day that the interviews were given, February 11th, which corresponds to a Thursday (which I offer only as a means of clarifying for those who place any importance on occurrences and calendars.) The interviews were set an hour apart, beginning at 10 am, with a break for lunch at noon, which was not taken. There were no witnesses to attest to the events of that day, nor were any useful explanations given as to what caused the closure of the school immediately following the final interview. Inquiries were made to various staff members of the administration regarding the sudden decision and its consequences. No response, coherent or otherwise, was proffered.

The supervisor moved to one of England’s cities, perhaps to work, or to live. Did he need to get away from Juana? Or was it that place. Yes, it was that place, and the land and the sky and the way it moved in the body. The way it changed a person. He had left to drench himself in London downpours and hear his adopted tongue spoken in a royal stable.

The mother of Juana woke up from one of her dreams (it was a Friday) and said: “Let’s get ready to go. Come on, it’s time.”

Juana runs the Mitchell trail, hidden up the burnt canyon to gaze across her town, those valleys. Over there, hidden beyond that high crest is Pipeline. Turn 360 degrees to see the trail down to Rendija. Mitchell trail is named after a boy scout who died, maybe on that same day—after the interviews. Did someone die that day? Juana does not remember. Juana only remembers things, as if from a dream. A man, coming in the night, a hotel room. A camera phone. The only evidence she finds: a wrecked car three blocks over, and a spot of blood on her mattress, which she only noticed when she changed the sheets. Afterwards, Juana guides her mother into the car, and drives, headed north towards the enclave, the high mesa.

She mounts the 2,000 foot climb to its confluence with Guaje Ridge, and on you go. Caballo Peak. Pajarito mountain. The air is clear here, the sky is as blue as it was when she was younger, pushing through her bowels, on the cuboid bones of her feet. The descent will be steep and swift, her hips will roll like scree, the conversations in her head will unlock some strange new form of lust. Hello, Juana. Run, run, run.

Sonya Wohletz, a New Mexico native, is an art historian whose focus is colonial Latin America. Yet, she has always harbored a love for creative writing, for which she finds inspiration in her very vivid dreams, travel, and curiosity for the unknown. 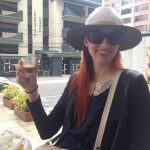